Drone collisions with airliners may not be fatal, US study suggests

Updated A ground-breaking US study has shown that while drone collisions do pose a threat to airliners, the odds of a collision causing a crash are much lower than a rival British government study claimed.

The American Federal Aviation Administration (FAA)’s drone research divison, Assure, conducted a study into the effects of drones colliding with commercial aircraft. Public concern over potential collisions is high, even though only two have ever been recorded across the world.*

Computer simulations carried out by Assure found that a 1.2kg quadcopter striking the windscreen of a commercial jet airliner travelling at 250 knots simply bounced off, leaving a few marks or chips on the windscreen.

“Due to the low angle impact in the transparency (~45°), the UAS impacts were deflected without inducing considerable damage to the windshield,” wrote the study’s authors. The worst damage likely to be caused was permanent damage to the windscreen but no failure of the whole structure. 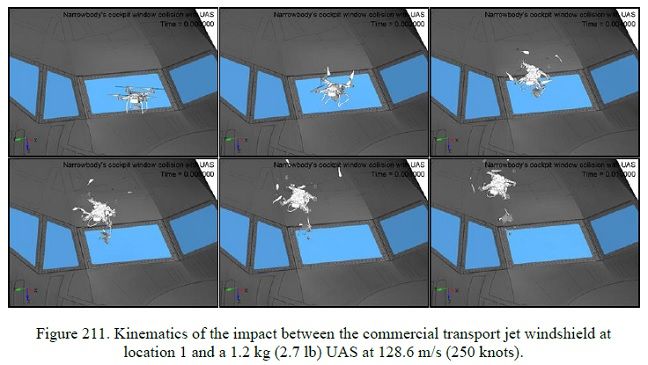 “The FAA study chose to test at 250kts - the reason being that this is the maximum speed below 10,000ft according to ICAO,” drone researcher Ian Povey of Clear Vision Security told The Register. “Clearly the FAA study was attempting in part to recreate the most likely collision environment in real-world terms.”

The Assure simulations assessed what would happen if either type of drone smashed into the wing leading edges, windscreens, tail fin leading edge or tailplane (horizontal stabiliser) leading edges of the aircraft. Researchers used computer models of a Boeing 737 and a Learjet 31A, representing narrow-body airliners and small business jets respectively, based on each aircraft’s approximate size.

Models of the two drone types used in the simulations – a DJI Phantom 3 Standard quadcopter and a fixed-wing Precision Hawk Lancaster Hawkeye III – were obtained by 3D-scanning real-world items and turning the resulting files into finite element analysis (FEA) models.

The computer simulations of the collisions themselves were validated by dropping the real-world drones from various heights, with the resulting smashes filmed on high-speed cameras and compared to simulator predictions. Researchers found a high match between simulated damage and actual damage.

Fires caused by batteries were also considered by the researchers. While a collision at full speed with the windscreen, wing leading edges or tail fin was most likely to completely destroy the battery, scattering its components, a collision with either aircraft’s horizontal stabiliser (tailplane) was considered most likely to partially damage a drone’s battery and start a fire.

In contrast to the American study being released in full for public discussion, a similar British government-funded study – seemingly carried out with the intention of giving the government a public reason for introducing sweeping new restrictions on drones – was only revealed in summary form, making it impossible to draw meaningful conclusions from the research.

Further criticism was levelled at the fact that military research firm Qinetiq, the British study’s author, couldn’t find a way to launch its test drone at the Airbus A320-series windscreen being used as a target for real-world validation of its simulations. A red-faced Department for Transport (DfT) public relations flunkey refused to give El Reg a statement detailing why mandarins didn’t want to release the full study... which is being used as a basis for legislation.

Licensed drone operator Ian Hudson was scathing about the British study, telling El Reg: “Drone industry experts the world over were bemused at the UK DfT study choosing to not use a testing methodology that assessed drone risk using a modern drone airframe; they chose a prehistoric Flame Wheel body with a Nikon bridge camera (an unrealistic imaging device) and also an unrealistically large LiPo battery, then arranged it into a javelin configuration.”

A DfT spokesperson told us today: “Drones have great potential and we want to do everything possible to harness the benefits of this technology as it develops. This is a new and technically complex field and research is essential to ensure any safety risks are properly addressed. The Department is considering the US research and will look to engage further with the FAA on this issue.”

Clear Vision Security’s Povey added that he had been told the DfT’s modelling was carried out at a simulated speed of 340kts, which is the sort of speed airliners reach when well above 10,000ft. However, the Assure study gave the service ceiling of the DJI Phantom 3 as 19,685ft (6,000m), though its firmware sets a height-above-ground limit of 394ft/120m.

The British drone industry is disgruntled with the government’s proposal to require licensing for all drone operators from late next year. While nobody disputes that some kind of registration and mandatory safety training scheme is necessary, the arguments on either side centre on where to draw the lines and on what basis. A Parliamentary bill setting out the licensing scheme is in the works and due for publication in spring 2018, we understand.

Underpinning that bill is the “science” of the DfT drone study. The lower weight limit for drone operators requiring a licence is just 250 grams, based on the findings of the DfT study – though an EU plan to impose mandatory licensing, publicly announced last week, also picked 250g as its lower limit, suggesting some behind-the-scenes string-pulling by Brussels.

“It's a disservice to image of the UK as a country where businesses can conduct testing on new technology when the government can't conduct impartial, credible and transparent risk analysis that is open to peer review,” thundered Hudson.

Povey of Clear Vision Security added: “Either the FAA have endangered the safety of commercial airliners by releasing so much information, or the DfT have lied to the public. If it's the case that the DfT have lied about the reasons for covering up the report methodologies and data this has stark implications for the proposed legislation and regulation of drone users scheduled for next year.”

American flight safety experts are treating the drone problem seriously, undertaking peer-reviewed research and opening up their methodologies and results for public inspection and critique. By contrast, the DafT approach, in concert with Qinetiq, has become impossible to sustain, particularly in the face of international criticism over its deliberately unscientific approach. ®

One drone collision occurred in Canada; the other was in the US, involving a military helicopter.

The Assure study also looked at what happens when a medium-sized business jet engine ingests a drone, using the same drone models as for the airframe analysis and a generic model of the first stage of a turbofan engine.

Although the researchers found that in no simulated scenario did drone ingestion result in an uncontained engine failure, they only modelled the first stage of the compressor fan, and not any of the multiple stages of turbines found behind the fan in most turbofan engines. The researchers acknowledged this, writing: “As was discussed in an FAA UAV ingestion safety report, a very small hard body fragment as little as 0.66 pounds poses the potential for severe engine damage. So even for the case where there is only minor damage to the fan, the engine might not survive the UAV ingestion.”

They also recommended further research be done into the effects of drone ingestion on a commercial airliner-sized turbofan engine.