The firewall might not work. It can corrupt data. Why haven't you downloaded it yet? 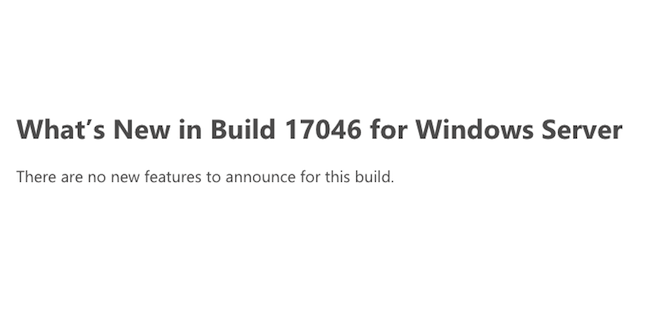 Microsoft's released something odd: a new tech preview of Windows Server's semi-annual release channel with no new features but a few known issues with the potential to mess things up.

The first-listed known issue warns that “Dynamic disks fail I/O with STATUS_INVALID_DEVICE_REQUEST, resulting in failures to mount or format a volume. The contents of an affected volume will be available after updating to a build that fixes this issue, so reformatting and restoring data from backup is not necessary.”

Further down the list is the known issue “The base filtering engine (BFE) service may fail to start, which prevents the Windows Defender firewall (MpsSvc service) from starting.”

A server with no firewall? What could possibly go wrong?

If you laugh at danger and install the preview anyway, you'll also sign up for the risk that “Data corruption may occur on some NVM Express (NVMe) solid-state drives (SSD) if scatter-gather list (SGL) functionality is enabled.”

Microsoft doesn't recommend running Tech Previews in production, so this issue's not so much a bug as a chance to practice extreme disaster recovery in a known-to-be-flaky environment.

The full details of the new release are here and registered users can download it here.

Let us know if you bother: The Register cannot comprehend why anybody would download a build with no new functions and lots of bugs, unless they're Microsoft fans keen to offer feedback. ®