IT buyer? Had enough of pesky resellers cold calling? You aren't alone

Up to 40 calls a day, three hours wasted 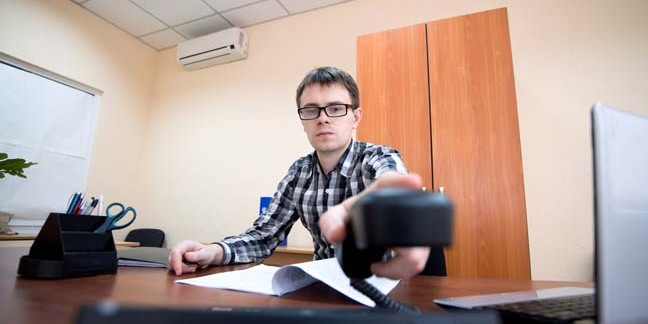 IT buyers are pestered by between nine and 40 unsolicited sales calls from resellers each and every day, collectively wasting hours of their life that they’ll never get back.

This was according to 60 per cent of 200 people questioned as part of a mini poll that was commissioned by, er, reseller Probrand.

On average, these calls are the biggest bugbear for tech pros, the survey found, which also found that some 90 per cent of these one-way blabfests lasted between one and five minutes or up to a total of three hours a day. Sound extreme?

One-third of those surveyed claimed to be so frustrated by the cold calling that they had started to view resellers as a “barrier” to buying tech and some 45 per cent would rather not deal with middlemen at all.

The web has allowed more buyers to research the tech they want; 53 per cent said they do this rather than dealing with a (potential) sales monkey on the blower, though 35 per cent still preferred to dial up a sales rep. Presumably the other 12 per cent didn’t know what they wanted.

But - and here’s the rub - while many would rather bin bog standard resellers, some 73 per cent would still prefer to talk to a rep when procuring IT services that can be a more complex purchasing decision. This is lucky for Probrand, eh?

“Our research shows that B2B buyers now want to buy IT on their own terms,” said marketing director Matt Royale. “They want the option to research and buy online without interference from an IT supplier, valuing technical and specialist help offline only when it suits them.

“As consumers, we all have become used to the self-service age where we expect utility and value online, and the rise of the marketplaces like eBay, Airbnb and Alibaba are surely shaping B2B buyer behaviour,” he added.

Surely the age of most box-shifters has been and gone. Amazon saw to that, and now Amazon for Business will finish off most of the remaining tin peddlers. Some resellers still make good money from it including Computacenter, Softcat and SCC.

Be sure to read next week for further biting research when we may be able to confirm that bears do lay curlies in the woods and the Pope is indeed Catholic. ®

Microsoft tells resellers: 'We listened to you, and we have acted' (PS: Plz keep making us money)

Software-snatcher backs down on licence plans

US Department of Defense to sling an estimated $3.17bn at Microsoft resellers

Resellers facing 'months' of delays for orders to be fulfilled. IT gathers dust on docks as coronavirus-stricken China goes back to work

SSDs, laptops, servers all hit in the struggle for stock

The march of Amazon Business has resellers quaking in their booties

Microsoft is Putin a stop to Russian-sanctions-busting IT resellers

IT resellers, this is your future: Shifting driverless cars within 5 years