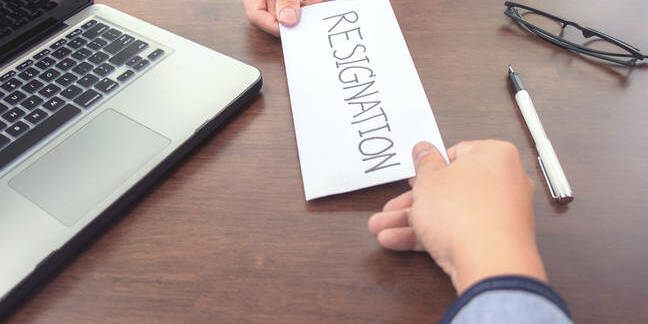 Just months after Nick Wilson landed in the UK hot seat at Frankenfirm DXC Technologies - the merger between CSC and HPE’s outsourcing division - he has quit, multiple sources have told The Reg.

Wilson is understood to have resigned roughly a fortnight ago and to be working a six-month notice period. It is unlikely he is joining a rival or DXC would have immediately triggered gardening leave.

“Wilson is going, DXC is not the most fun place to be,” one senior industry contact told us. “My understanding is that a definite notice period is being worked.”

The exec previously ran HP in the UK from 2009 until 2012 when he migrated down under to run the firm’s Enterprise Services ops in the South Pacific. He returned to Britain when DXC was formed in April this year, and invited staff to wear fancy dress for their first day that fitted with the corporate colours.

Contacts inside the business repeatedly informed us that DXC is a tough place to work and morale among some folk is rock bottom due to the unrelenting pressure to reduce overheads.

Senior US management have earmarked $1bn worth of cost reductions for DXC’s first fiscal year which has resulted in measures including three redundancy programmes, squeezing suppliers' margins, penny pinching on staff expenses and real estate consolidation (offices and data centres).

Wilson has had to carry out these plans in the UK, though given the track record of HP/HPE ES and CSC in terms of employee layoffs, it is hardly surprising that DXC has continued in the same vein.

One of the fundamental challenges facing DXC is to cut costs faster than customer contracts run off; the Department of Work & Pensions, Aviva and Centrica are among big accounts known to have not renewed existing agreements and others are rumoured to be following suit.

DXC revenues in the six months ended 30 September - compared to the previous year’s sales by CSC and HPE ES - were down 5.5 per cent to $12.07bn.

The Register left messages for Wilson and when he finally answered his mobile, he hung up on us. DXC refused to comment. ®

CSC shows first growth in two years... after ploughing half a billion into takeovers

You gotta spend money to make money, after all

CSC beats off Capita, snaps up Xchanging for £480m

Soz Crapita, we don't want your peanuts after all

He's 'transitioning to the next chapter of his career', says firm