Intel has released the successors to its low-power Pentium 'Silver' and Celeron lines.

The new chips are based on the Gemini Lake architecture (Intel's successor to 2016's Atom-derived Apollo Lake) and will be largely aimed at low-cost markets like budget PCs, 2-in-1 tablets, and data entry boxes that don't require much muscle.

In short, these aren't the chips you're going to drop into a high-end gaming rig; that's what the Kaby Lake Pentium Gold CPUs or top-end Core ranges are for. 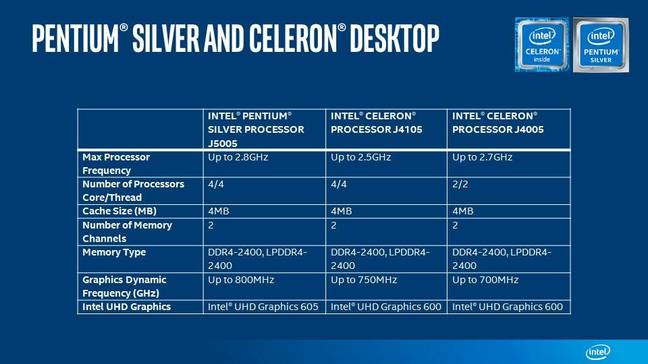 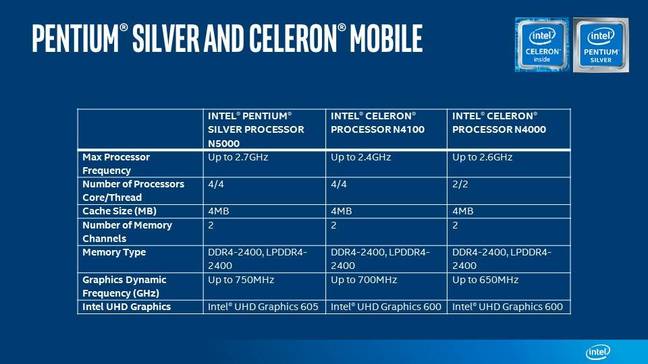 Specs for the mobile chips

In addition to a low cost and longer battery life, the Gemini Lake chips will sport integrated 802.11 B, G and N networking, letting them take advantage of gigabit Wi-Fi setups where available. They will also use Intel's UHD integrated graphics hardware.

The chips are now shipping to OEMs and Intel said it expects the first machines to hit the market in early 2018.

"With Intel Pentium Silver and Intel Celeron processors, Intel has worked hard to ensure buyers have the flexibility to choose from a range of designs – laptops, 2 in 1s, all-in-one PCs, mini PCs and desktops – and price points, providing a value-priced PC that handles the things they do most at home, at school or on the go," Intel says of the new chips.

The Gemini Lake chips represent the bottom end of a CPU hierarchy from Intel that separates the Pentium Silver and Celeron chips from the Kaby Lake-based Pentium Gold chips Intel released earlier this year. ®