The company, born in Pennsylvania, is far from the hustling, VC-fuelled growth frenzy that is Silicon Valley – although it has a presence there. The 17-year-old high-performance computing (HPC)/supercomputing storage company is privately owned.

The largest one is in the UK, at Rutherford Appleton Labs, where the JASMIN system has 20PB of Panasas storage – around 1,500 storage blades.

The company is led by CEO and president Faye Pairman, who has been in place since April 2010. 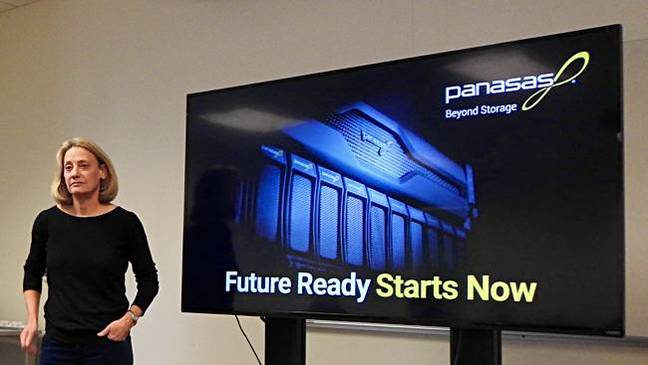 This is a quite conservative company that takes a measured and careful approach to everything, not least to its move into the growing commercial HPC market. This started some years ago and culminated a couple of weeks ago with the new architecture for its scale out, parallel filesystem array.

It can now scale compute and storage individually, and develop the two components separately as well.

We were given a sense of what might happen at a briefing in its Silicon Valley office, and learned that a strong trend in commercial HPC was the growth of small files. Since Panasas stores small files in flash, along with its NAS metadata, that affects both the storage nodes - more accesses - and the directors - more metadata processing relative to the space taken up by file data.

That means likely developments for both the director and storage nodes.

The ASD-100 director nodes use Intel Xeon E5-1630v4 3.7GHz 4-core Broadwell CPUs. That means there is the possibility of moving to Skylake Xeons – when the small file and metadata processing load has risen sufficiently.

Senior software architect Curtis Anderson told us: "We're not gated by compute power - we have a lot of director blades." He mentioned the possibility of a "fat node" with more memory and/or CPU for "dealing with yet more small files."

Currently a storage blade has two drives, an SSD and an Atom processor.

Anderson said Panasas was going to change the number of drives per storage blade, increasing them in its next-generation storage. The company wants to move to using more industry standard components.

Potentially there could be different types of blade: an all-flash performance blade, a performance hybrid blade, and a capacity hybrid blade. This would give Panasas more scope to adapt to changing HPC workloads, it said.

Faye Pairman said Panasas had investors who are quite conservative and it is a small company, with 100 employees, with limited reach: "We go heavily in the USA but we’re more measured outside."

Panasas is growing in what Pairman calls a measured way – she seems to like the word measured – and is moving away from heavy dependence on a few small government customers. It says its architecture and product capabilities were ahead of the time but the market is now coming its way.

The obvious comparison competitors for Panasas are DDN and Isilon, with Qumulo coming on as well. DDN has more product and covers more ground with its WOS object storage and IME burst buffers as well as the parallel file system ExaScaler and GridScaler systems. Panasas of course, is claiming its systems are far easier to manage and quicker to deploy than these.

Isilon is the gorilla in the scale-out NAS market, and has the benefit of Dell's sales and marketing infrastructure, while Qumulo is growing fast, and recruiting Isilon staffers disaffected by the environment inside Dell.

It was founded in 2012 by ex-Isilon people, and launched its first product two-and-a-half years ago. The company has 200 employees, twice the number at Panasas, and $130m in VC funding, almost twice that of Panasas.

Where the Pennsylvanian firm said it is a traditional and commercial HPC company, Qumulo describes itself as a universal scale-out filesystem storage business, with billion file scale and the highest performance. We suspect Panasas systems might be faster though, although Panasas’ commercial HPC (parallel file system) market niche will be smaller than Qumulo’s scale-out filesystem space. ®