video It's at least 150 years old, one-and-a-half Earths wide, reaches 300 km (around 200 miles) into Jupiter's atmosphere – and now, thanks to data from the Juno probe, NASA's offering the chance to take a virtual dive into the famous Great Red Spot.

When it made its first pass over the vast super-storm in July 2017, one of the instruments Juno brought into play was its Microwave Radiometer (MWR), which can look deep below Jupiter's cloudy atmosphere.

That and JunoCam imagery gave NASA/Caltech Jet Propulsion Laboratory boffins the data they needed to create the animation below.

The animation shows the huge temperature gradients in the spot (below 100 K at the edge of the atmosphere, rising to more than 500 K near the bottom of the Great Red Spot), a huge source of energy contributing to the storm. 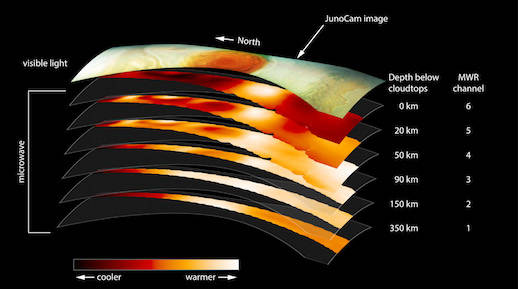 Caltech planetary science professor and Juno co-investigator Andy Ingersoll explained: “Juno found that the Great Red Spot's roots go 50 to 100 times deeper than Earth's oceans and are warmer at the base than they are at the top … Winds are associated with differences in temperature, and the warmth of the spot's base explains the ferocious winds we see at the top of the atmosphere.” 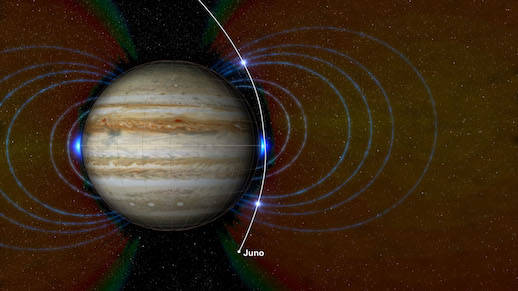 Using Juno's JEDI (Jupiter Energetic Particle Detector Instrument), the probe found the radiation belt because “we literally flew through it”, according to Heidi Becker, who heads up the mission's radiation monitoring at JPL.

The boffins reckon the radiation comes from fast-moving uncharged atoms, created in the gas around the moons Io and Europa, becoming ions “as their electrons are stripped away by interaction with the upper atmosphere of Jupiter”.

Yet to be explained are hints that there's a high-energy ion population in Jupiter's “relativistic electron radiation belt”, detected as high noise signatures in images from the probe's Stellar Reference Unit (SRU-1). ®