Happy with this Utopian vision of the driverless future? Tell the Highways Agency 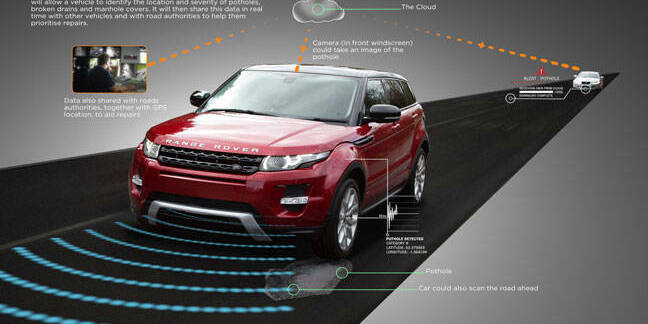 A Highways Agency report suggests that cars of the future could report road potholes automatically, with fleets of auto autos being instructed to swerve around them without human intervention.

The Strategic Road Network Initial Report suggested these vehicles could be used to automatically report defects in roads back to maintenance contractors – as well as warning other connected vehicles to avoid the damaging carriageway flaws.

“Connected vehicles could report potholes, uploading data on the location and severity of the pothole, which is then shared with the local maintainers and even other connected vehicles, to help them avoid it,” said the report.

In addition, drones could be used to help spot traffic problems from the air and help relay information back to the Highways Agency’s control rooms, the report’s authors stated.

“We are currently trialling drones to inspect structures, but such technology could also be used to improve response times, for example for a first assessment of incidents or for traffic monitoring,” said the report. Currently, traffic monitoring is done through the Highways Agency’s extensive network of CCTV cameras spread around the country.

Everyone’s favourite buzzword, the Internet of Things, was also mentioned in the report: the Highways Agency claimed that connected cars could automatically text your contacts if traffic flow failures on their network made you late for a meeting. It’s a nice thought but not really within what the technical world sees as IoT.

Electric cars also scored a few honourable mentions, with the agency promising to install rapid chargers at 20 mile intervals across 95 per cent of the “strategic road network”, i.e. motorways and major A-roads.

Highways Agency tracks Brits' every move by their mobes: THE TRUTH

We better go back to just scanning everyone's number-plates, then?

Plus over £100m to go on traffic database

Trumps rivals in IT deal

Go on, let's put the internet in everything...