Comment It has kept everyone waiting but Magic Leap has finally revealed that… there are still publications stupid enough to keep printing its bullshit.

This time around it is the desperate-to-please tech arm of Rolling Stone, Glixel. Glixel shuttered its San Francisco office earlier this year: a loss for tech journalism but a golden opportunity for Magic Leap CEO Rony Abovitz.

To recap: the augmented reality startup has received nearly $2bn in funding over four years, values itself at $6bn, and has yet to produce anything but fake technology.

First, there was the faked whale video – in which a full-size virtual whale leapt out of a gym floor – that everyone, including mainstream TV news outlets, covered in great detail. It never happened.

Then there was the fake robot shoot-em-up game. Then the fake planets revolving around a desk video. It turned out that rather than reflect Magic Leap's technology, the over-funded upstart simply paid huge sums of cash to a biz that does Hollywood special effects to make it all look real.

As the money well dried up, Abovitz persistently failed to turn his vision into reality, and so the showman continued to exploit tech journalism's weakness – its desire for the Next Big Thing – to get scribes to report his failure as a secret project just about to come good.

This time, of course, it's different: Magic Leap has published pictures of its AR goggles with a promise to open up it system to developers in "early 2018." Rolling Stone was given an exclusive behind-the-scenes viewing of the technology in action – which is, by the way, the exact same thing Abovitz did with WiReD magazine last year.

It is the same story all over again.

Amazingly, the article not only mentions that no one believes Magic Leap anymore but literally lists how tech publications continue to be conned by the salesman's spiel.

From the article: "The first real look at what the secretive, multi-billion dollar company has been working on all these years… It also adds some insight into why major companies like Google and Alibaba have invested hundreds of millions of dollars into Magic Leap, and why some researchers believe the creation could be as significant as the birth of the Internet."

But, yet again, all the warning signs are there:

As with almost all of the demos I experienced over the course of an hour or so, I can describe the intent and my own thoughts, but I agreed not to divulge the specifics of the characters or IP.

Any tech journalist that signs an NDA is already asking for trouble. Especially with a company that has repeatedly prevaricated about its technology. The reporter then makes an effort to be honest:

In many cases, these are experiences that will never see the light of day; instead they were constructed to give visitors who pass through the facility under non-disclosure agreement, a chance to see the magic in action.

At this point, the article should have gone into all the times that Magic Leap has offered people – typically celebrities like Beyonce, Ricky Gervais etc – a special look at its demo as a way of raising its profile and creating buzz in order to bring in more money. But it doesn't.

Instead it goes into great depth about the very carefully constructed demos that Magic Leap has put together in a carefully controlled environment – and completely fails to recognize the difference between spending billions on something cool and having an actual real product that people can buy. 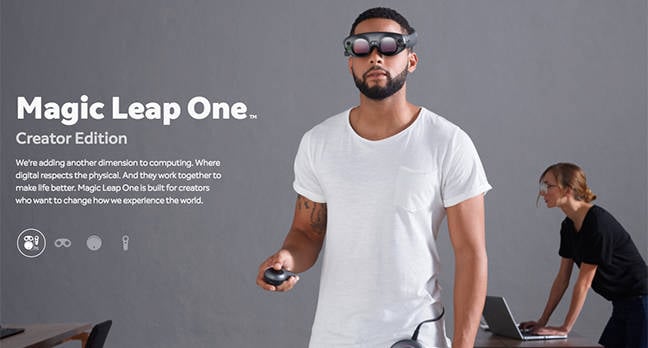 This is how it looks - honestly.

The article is littered with pictures of models with Magic Leap's new goggles – supplied by Magic Leap. But they are, of course, just more PR puff. Abovitz literally cannot stop himself from confusing sci-fi enthusiasm with what he is able to actually do.

It makes him someone exciting to listen to – but unfortunately, no, this vapor-ware-rub won't alleviate rheumatism, sciatica, lumbago, strains, toothache, frostbite, swellings, bruises and animal bites:

The headset also can sense the sound around a user through four built-in microphones and uses a real-time computer vision processor along with – I counted six – external cameras to track the wearer and the world they’re in, in real-time.

Tiny, high-end speakers built into the temples of the device provides spatial sound that can react to your movement and the movement of the creations with which you’re interacting. 'This isn’t a pair of glasses with a camera on it,' [Abovitz] says. 'It’s what we think of as spatial computing. It has full awareness.'

We can say with some confidence that even if that was all possible within a single headset, it most definitely would not look like the pictures released by Magic Leap. Morever, the tiny attached computer is not going to be capable of processing that amount of information.

But even if Magic Leap had somehow bested the best technology companies on the planet to get this level of miniaturization, it would still need to have skyrocketed past current battery technology to make it all work for more than five minutes.

The article is full of Abovitz's excited future-painting and the incredible journey he and his team have gone through. But, of course, he fails – again – to provide any real details. Some quotes:

Despite all of this, the article still continues to give a glowing tribute: "Magic Leap, in releasing their system to the world is combining a slew of technologies into something that could one day reinvent the way we deal with all technology."

And of course the article has served its purpose: getting over-excited individuals to write glowingly about a pretend made-up technology. Which soothes investors. Here's the thing with investing: once the money is in, it's very hard to get out. In fact, often the only way to get it out, especially with new technology, is to rely on hype bringing in a big valuation and then cash out before its real value is properly assessed in the market.

So here then are our predictions:

Incredible, airbrushed and available... when?

And in truth, Abovitz knows it's all coming, but he just can't get off the ride because it's all gone too far and he's too tied up in it.

"I call this the cockroach of the industry because it just never dies and it needs to just stop," Abovitz said in the article. He said it while looking at a monitor with a picture of a stereoscope from the 1830s. But, let's be honest, we know and he knows that he's not talking about the stereoscope. ®