That was fast... unlike old iPhones: Apple sued for slowing down mobes 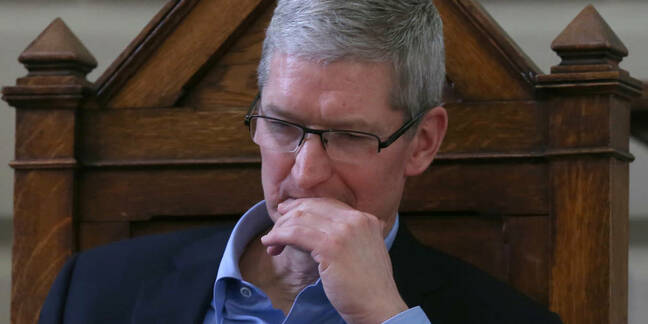 One day after Apple acknowledged that it has been downclocking the CPUs in older iPhones to prevent sudden shutdowns from battery exhaustion, the first lawsuit has arrived.

Filed in the Northern District of the State of Illinois on Thursday, the complaint aspires to become a class action for the supposedly thousands of affected individuals in Illinois, Indiana, Ohio, and North Carolina – the US states of residence for the five named plaintiffs.

The court filing contends that Apple deliberately kept quiet about its CPU limitation scheme to fraudulently maintain or drive up sales. The Cupertino idiot-tax operation's mobile operating system silently slows down the processor in older iPhones to ensure they don't rapidly drain their aging batteries, which suffer from a reduced capacity.

And while that slowdown avoids previous-generation iPhones unexpectedly shutting off, due to exhausting their weary batteries, it also means apps run sluggishly. There is no on-screen warning this is happening, so iPhone owners were left wondering why their handhelds were performing so poorly. No wonder there are long queues for new iThings when they launch. Kerr-ching!

"Apple’s iOS updates purposefully neglected to explain that its purposeful throttling down of older model devices and resulting lost or diminished operating performance could be remedied by replacing the batteries of these devices," the lawsuit claimed.

"Instead, Apple’s decision to purposefully slowdown or throttle down these devices was undertaken to fraudulently induce consumers to purchase the latest iPhone versions of the iPhone 7, as well as new phones such as the iPhone 8 and iPhone X," it added.

The complaint recounted how the various plaintiffs, frustrated by iPhone slowdowns, bought the latest models, unaware they could have just paid Apple US$79 for a $4.45 replacement battery to resuscitate their hobbled handset.

Apple did not not immediately respond to a request for comment, which isn't particularly surprising because the biz seldom weighs in on legal matters. That it chose on Wednesday to respond to media requests about its power management practices suggested the matter had generated significant controversy.

Apple said lithium-ion batteries become unable to meet its handsets' peak power demands over time, raising the risk of unexpected shutdowns during periods of high demand on the processor.

To provide a better experience to customers, the company said, it implemented a CPU throttling feature for its iPhone 6, 6s, and SE earlier this year, which it extended to its iPhone 7 in December with the release of iOS 11.2.

The lawsuit voiced more or less the same objection as Primate Labs founder and prez John Poole, who told The Register on Wednesday that Apple should have been more forthright about the issue. ®