Analysis Enterprise flash drive use will surge over the next four years due to price falls, capacity rises, NVMe speed and Internet of Things (IoT) edginess, analysts have agreed.

Senior bod at Wells Fargo Aaron Rakers has looked at trends and extrapolated them, and factored in flash drive supplier predictions and other research house assumptions.

The trends are predicated on price declines returning after a recent hiatus, a desire to move compute closer to data (or vice versa), and the impact of NVMe. He reckons this will drive a significant inflection in SSD performance and, more notably, in capacity density.

There is also a rising need for flash in IoT edge devices, such as equipment in factories, ships, airplanes, smart cities, motor vehicles, hospitals, etc, said the analyst.

The price decline forecasts come from IDC, TrendForce and WDC.

Western Digital concurs with that from a 3D NAND viewpoint, and has reported having seen 3D NAND price declines in the 15 - 25 per cent per annum range. 3D NAND bits surpassed 50 per cent of total NAND Flash bits supplied in 2017's third quarter, and are estimated to reach 85 per cent by the end of 2018, so they can be a proxy for overall NAND price/bit changes.

Rakers has charted this, assuming a -26 per cent bit price CAGR: 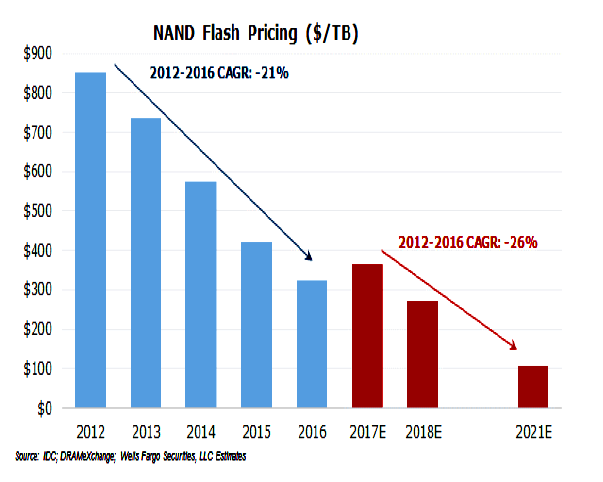 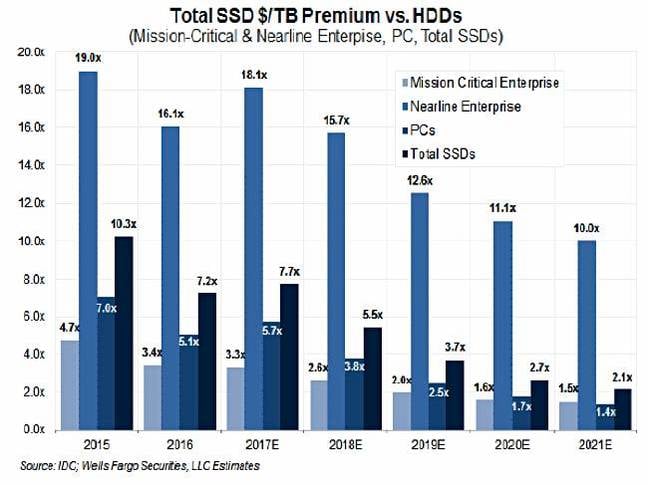 He looked at SSD ships related to disk drive ships on a capacity basis, seeing the flash percentage share rising to 19.3 per cent in 2021 from 8.4 per cent this year: 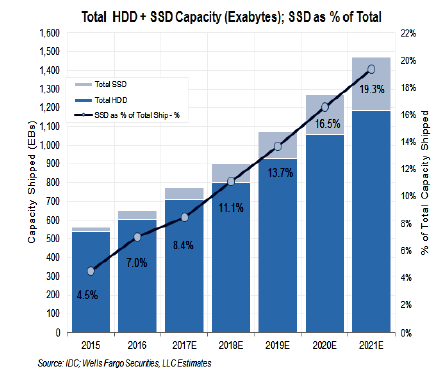 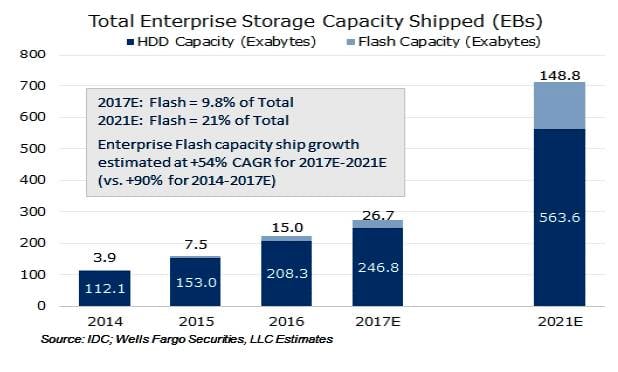 Lastly, Rakers looks at the interface segment splits for enterprise flash drives, seeing – no surprise whatsoever – PCIe (used by NVMe drives) taking over from other interfaces: 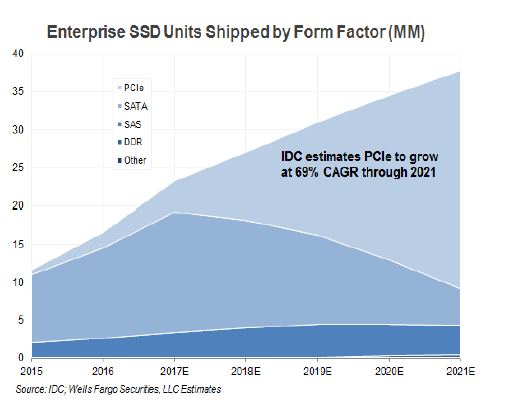 We could play the extrapolation game ourselves and ask, given these different capacity growth numbers for SSDs and disk drives in enterprises, could crossover theoretically happen?

Given straight line extrapolation and enough flash fab manufacturing capacity expansion – yes, it could. But the thought exercise is futile if we wanted to know when it might happen or even if it would.

Technology advances in disk drives, such as Seagate's multi-actuators, are changing the parameters of the SSD-HDD comparison game however.

It's still not clear if QLC (4bits/cell) flash will actually be an enterprise-class technology. Flash capacity increases beyond that might stall because there is nothing beyond QLC, such as a theoretical PLC (penta level cell - 5bits/cell) technology, or layering beyond 96 x 3D NAND layers might hit a roadblock. Who knows what else might happen? So extrapolate at your peril... ®