Review Not that long ago, a thermostat was just a thermostat. It was a beige box that was often installed by someone who came out to your house or office. It did what it did. Turned the heat on, turned the heat off. Had a schedule.

Then came Nest, which promised to bring the ugly beige box into the internet era with sexy styling, smart technology and apps. Suddenly, your thermostat looked cool, it automatically figured out your best settings and saved you money to boot.

The big question when Nest announced it was moving into a similar beige-box market – security systems – in September was can it do the same? Will we all start to covet this new security system?

Well, having tested the system now for two months, we can answer authoritatively: yes and no. And which side you will end up on will depend on two things: the size and shape of your home; and how much money you have and are willing to spend on a security system.

First up: the positive. All things being equal, we would have no difficulty in recommending the Nest Secure. The gizmo maker has, once again, brought it unique sense of styling and usability to a competitive but largely homogeneous market.

In the first category, ADT dominates; and in the second, Frontpoint is persistently the most highly rated. Nest hopes to steal customers from both as well as use its name and ecosystem of products to win new customers – likely millennials.

Its pitch is pretty much the same as its previous products: we have produced a better looking, better functioning product that works seamlessly with an app and so over the internet. Throw out the beige box and go Nest!

But that gap is smaller in the security market than it was in the thermostat market. For one, security companies have been making better products for a few years now. Their highest-end products all have apps, and increasingly those manufacturers have started encroaching on Nest's smart home territory, offering smoke detectors and video cameras that all tie into their system. Remote monitoring is readily available.

The name of the game is to get your kit in a customer's house. At that point, the lock-in aspect is enormous. People can't be bothered to tear out an entire system and install a new one. Much easier just to stick with what you've got.

And the reason the ADT model still has 90 percent of the market is because it does it all for you, charging a flat fee to install, no charge for all the equipment, and then somewhere between roughly $30 and $60 a month on a three-year contract. So you get everything upfront for low hassle and low cost.

A competing subscription model shifts the cost by getting you to buy the equipment and then offers a slightly lower monthly monitoring fee.

The big difference is that ADT-style companies' equipment is typically not as nice. It is larger, clunkier beige box. You punch your code into a keypad. It beeps angrily at you. Frontpoint-style companies have smaller, sleeker equipment and slightly more user-friendly controls.

Coming into this market, Nest's products are better in that they are much nicer to work with. The access code keypad and alarm siren come as one in a fat puck – similar to the Nest thermostat but thicker. Rather than have two separate types of sensors – one for doors and windows, and one for motion – Nest has combined it all into a single sensor. Rather than a rectangular box, it is a smooth, curved, oblong.

You place the sensors around your home, and they communicate wirelessly with the Nest Guard base station. If someone's detected breaking in, a siren in the base unit ultimately goes off.

Considering that 99.9 per cent of the interactions with a security device will be you turning it on and off, it is far more pleasant to have a voice than a beep.

Nest also had a tag system. You just wave your tag near the main alarm unit and it is enabled, or disabled. Nest is not the first company to offer this by any stretch of the imagination. But while tags are increasingly common in Europe, in America, punching in a code is still the most common way of interacting with your security monitoring device. The tag is better in almost every way (although you can still type in a code on the Nest – and even create multiple codes and assign them to multiple people). 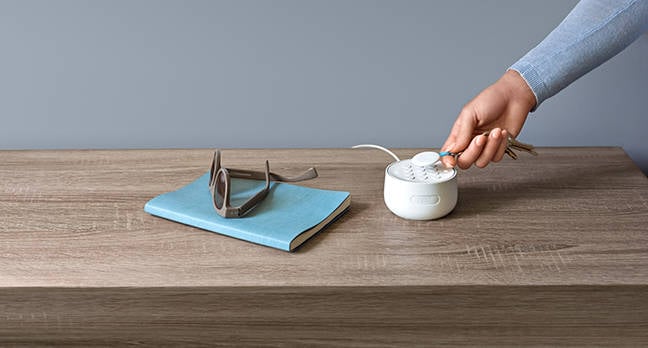 The Nest Guard base station, part of the Nest Secure kit, has to be on a horizontal service ... But the tags are nice

Another big plus: Nest's smartphone app really is the best on the market. It seamlessly ties in all Nest products: from smoke detectors to cameras to thermostats and now this security system. And it works consistently well. Only on very rare occasions has it performed badly or crashed – and that was almost certainly an issue with the smartphone rather than the app.

One really nice thing the Nest system does that we found ourselves using more and more is how it can communicate with your phone. Walking toward the house, the Nest phone app popped up a prompt: "It looks like you’re close to home – turn off alarm?" And with one tap, you can turn off your alarm before you even open the door.

You can also use this location system to turn on and off a Nest camera. We set it to turn on an indoor camera when the phone was not there, and turn if off again when we turned up. It's a good privacy setup.

One more thing that is good: it has, like most systems do, a Home setting where you enable the alarm but it only goes off if one of the sensors covering entryways into the house is triggered, ie: you can move around inside your home but any effort to get in sets off the siren.

Nest has a neat setup for the situation when you want to pop outside – to go for a run or to put out some rubbish or receive a freshly cooked pizza – you simply press a button at the bottom of the sensor and it temporarily pulls it out of the system. Come back in and press the button again, and it's back in the alarm system. You get used to it pretty quickly, although you will occasionally forget and have to tell the alarm system that all is fine.

Oh, and each sensor also has a little pathway light that you can set to turn on if you walk past it – which can be really useful at night in a dark house.

And, yes, Nest Secure requires an internet connection, via Wi-Fi, so it can talk to your phone's app.

So that's the good stuff. All things being equal, buy the Nest Secure. It is the best system we have used. It's a pleasure to use. And after you've used it for a while, it doesn't feel good to go back to another system (in this case, we were running the Nest Secure in parallel alongside our ADT installation).

Its basic starter kit – base station, two sensors, two tags – costs $499. Which is fine. But if you have more than one door and one window that you want to monitor, you will need to buy more sensors at $59 a pop.

By comparison, Frontpoint's $675 system (which is often discounted, currently to $350) includes a base station, 5 door sensors, 2 motion sensors, a glass breaking sensor, and a smoke alarm. Build the same setup with Nest and it's $915. A lot more.

Likewise, the ADT model will give you a much, much bigger setup for less than $100, with a three-year monitoring contract starting from about $30 a month. It claims its own equipment is worth $850. If you terminate the service early, you'll have to cough up 75 per cent of the monthly fees you would have paid anyway to the end of the contract term. 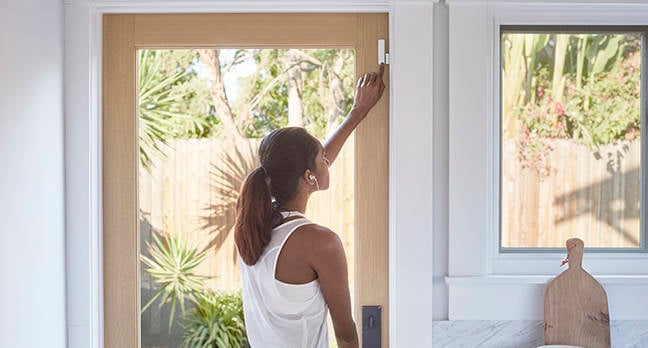 As for the cost of extra sensors, that's pretty much standard across the industry: Frontpoint charges $33 for a door/window sensor, and $65 for a motion sensor; ADT charges $60 for its sensors; Nest charges $59.

Monitoring charges – getting someone to come to your house if an alarm goes off – are also pretty similar. Nest charges $25 a month through a third-party if you sign a three-year contract; $35 a month without. In fact, the company it uses – MONI – is the second-largest security company in the US behind ADT and offers its own solutions. Frontpoint, as mentioned earlier, is $30-50 a month; and ADT is roughly $30 to $60 a month (but comes with the equipment for free).

So the upshot is: Nest is more expensive upfront and a similar cost on everything else.

Next page: And the downsides
Page: