Cool disk drive actuator pillar, Seagate – how about two of them?

Analysis As we've previously written about here, Seagate has the technology to split a disk drive's read-write heads into two independent sets, an upper and lower half, which increases the drive’s IO performance by having the upper and lower platter sets do IO in parallel.

Disk drives with two actuator posts could read and write in parallel on all platters and truly double performance, unlike Seagate’s single post multi-actuator design.

Part of the reason for doing this was that disk drive capacities are rising to such heights, with 12 and 14TB drives, that their IO ability (or density) lags far behind with disk build times getting ridiculously long.

UK storage expert Chis Evans, founder of Architecting IT, discussed the limitations of Seagate’s technology in a blog, saying: “How will data be written to the drive?  If we want to double throughput, both sets of platters would need to be written at the same time.  This would negate any performance improvement on read, because all heads would be dedicated to reading that data and couldn’t do other work.”

He also discusses an IO queuing issue: “Will I/O be treated as a single queue and simply improve the “elevator” NCQ/TCQ performance?  Or, would there be an opportunity to serve multiple queues, for example, to enable a drive to be read for RAID rebuilds at the same time as accessing host I/O requests?  As drives get larger in capacity, the ability to multi-stream for rebuilds may become really important.” 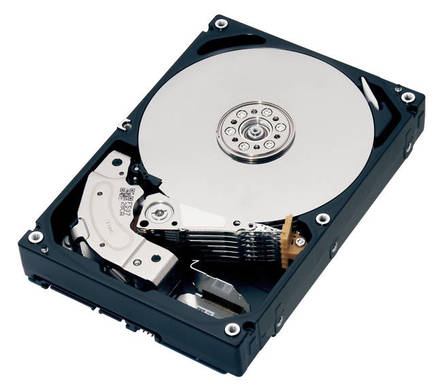 Could a second actuator pillar with read-write heads be squeezed into a disk drive enclosure?

Part of the root of these issues is that the read-write heads in Seagate’s technology use a single actuator post. If there were two posts, each with a full set of read-write heads, then each set could read or write in parallel, with reading of data on all platters being done at the same time as writing operations were being carried out on all the platters.

Similarly both sets of heads could read in parallel to double read IO performance.

What does the disk drive industry think of it? Would there be room in the standard disk drive enclosure? We asked a couple of some experts and Seagate about this.

Chris Evans said: "The first issue is that reading from 2/4/8 actuators is never going to be truly independent as the platter has to be in the right place to make best use of the I/O. For sequential, this isn’t a problem; waiting 1/2 a turn or whatever for the disk to come round is only a few ms.

"Then the transfer can occur. So you could get two streams going. Buffering helps a lot here, so maybe more cache would be needed. However for random I/O, the I/O to be read would need to be evenly distributed across both sets of platters, otherwise the random I/O increase would only be as good as the degree of distribution."

Then there is a queuing issue which particularly affects SATA drives: "Both SAS and SATA only have single queues. The SATA queue depth is relatively small (32) compared to SAS with a typical 254. How is this problem going to be resolved? Multi-actuators may see no significant gain in SATA devices, only on SAS."

What does it all come down to?

"I think it will come down to the data layout and quality of queue processing algorithms the vendors invent. [Some people] seem to think this is all about getting throughput closer to the interface speeds - e.g. instead of 250MB/sec from the device, getting to 600MB/sec SATA/SAS speeds. I’m not sure that this is right, because if you have (say) 8 heads reading/writing compared to 2 groups of 4, how is the throughput any higher with purely sequential?"

"There’s a variable cost model of capacity/performance/power/space that’s being done by the hyper-scalers [Google, Facebook, etc.]. If multi-actuators increases throughput with minimal additional cost, then I’m sure the drives will be popular. We don’t know that calculation, so it’s difficult to see what the hyper-scalers are looking to gain."

Howard Marks, founder and chief scientist at Deep Storage Net said: "We've had drives with 2 positioners before (IBM 3380 - one set of heads were dedicated to inner tracks, the other to outer tracks). That was back in the day of linear voice coils so they came from opposite sides of the 14-inch platters."

He identifies a software issue with Seagate's multi-actuator single pivot design: "Most storage software including logical volume managers and file systems, are built with the knowledge that a disk drive can only have it's heads in one place at a time and their queuing logic may mismatch with the multipositioner logic."

This means: "It may not double throughput for large I/Os."

It could get close though, as "I understand that Seagate is going to make these look like 2 logical drives via a driver. That should solve #1 above and let systems get 1.8-1.9X IOPS."

How about a double pivot design? "The real question is will a 20TB drive with 2 positioners be enough cheaper, when cost of slot, expander port, etc., are factored in, than two 10TB drives to make it worth while."

Jason Feist is Seagate’s Director of Technology Strategy and Product Planning, responsible for the Seagate’s Data Centre product roadmap, and he answered the questions we asked.

El Reg: Is it technically feasible for a disk drive to have two actuator posts with two complete sets of read-write heads that would operate independently and in parallel?

El Reg: This would clearly have an extra cost but would enable a true doubling of IO performance.

El Reg: Has this idea been examined in the past?

Jason Feist: Yes, various configurations for multi-actuation have been, and will continue to be, examined. Our recently announced Multi Actuator technology design using a single pivot point enables the same IOPS advantages you would see using multiple pivot points, in a more efficient design. Current 3.5-inch nearline hard drives can deliver ~80 IOPS in Q1 Random Reads. With our Multi Actuator concept we are going to deliver ~160 IOPS at Q1 Random Read performance.

El Reg: What are your ideas and thoughts about multi-actuator disk drives and the arguments for and against them?

Jason Feist: We are bullish on this technology. A number of key customers have validated the concept and are working closely with us on the development of the technology.

Hyperscale data center service-level agreements (SLAs) are a critical factor in defining storage deployment needs and designing next-generation technologies that efficiently support storage deployments. In order for TCO (total cost of ownership) to continue to improve, the IOPS of a disk drive need to increase along with the capacity increases we're enabling with new areal density advancements.

The small cost adder that is required for additional components to deliver this performance gain is a much more cost-effective solution than using additional drives/spindles. The hard drive and SSD have a strong relationship in a data center, and both are required to achieve capacity and performance requirements at scale.

The IOPS growth provided by Multi Actuator technology in disk drives enables this relationship to continue to scale into the future.

Multi-actuation looks as if it really could fix the long-lasting IO density problem suffered by disk drives. The queuing issues identified by the two experts will need to be fixed but we think Seagate is already well aware of them and working on operating system driver code to provide answers to the problems.

Hopefully we will see 12TB-plus disk drives later this year, or early in 2019, that will feature the technology and provide significantly faster disk IO. ®