The Russian Defense Ministry has reported that its forces in Syria have been attacked by a swarm of GPS-guided drones carrying improvised explosives.

The attack took place on the night of December 5, with 13 drones were picked up on radar. Ten aimed themselves at Russia’s Hmeymim air base and three more headed for a logistics and supply base near the Syrian city of Tartus.

According to the Russians six of the drones were pwned by electronic warfare specialist and diverted from the attack. Of that six, three were successfully collected for examination but the remainder detonated after landing. The Russians report the other seven were blown up midair by a Pantsir-S anti-aircraft missile system.

"Currently, the Russian military experts are analyzing the construction, technical filling and improvised explosives of the captured UAVs," said the statement.

"Having decoded the data recorded on the UAVs, the specialists found out the launch site. It was the first time when terrorists applied a massed drone aircraft attack launched at a range of more than 50 km using modern GPS guidance system."

While this sounds scary the pictures posted of the drones by the Russians raise some serious questions about the efficacy of the technology used. While the home-made bombs look authentic the drones themselves look cobbled together and low-tech. 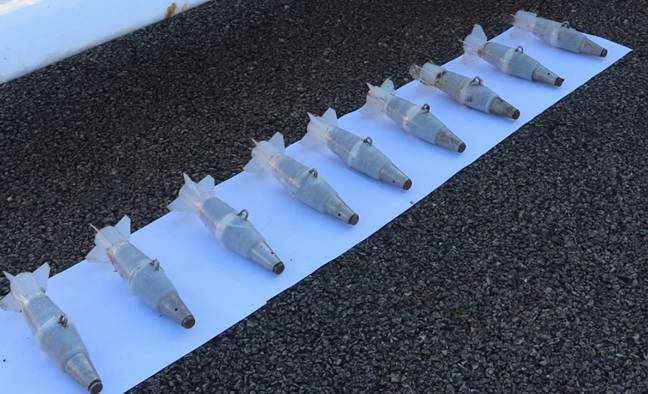 The drones appear to be powered by a single propeller that will be familiar to anyone who has flown model aircraft. They also bore a control package and presumably a fuel tank built into the body of the drone, but appear to have few metal parts and lack even landing wheels. Russia has not shown details of the GPS control system, but insist they were highly advanced machines.

"Attacks on the Russian objects in Syria could be received from one of countries with high-technological capabilities of satellite navigation and remote dropping control of professionally assembled improvised explosive devices in assigned coordinates," Russia's military said.

Drones have become increasingly common weapons for forces of all sizes. Even the medieval terror bastards in Iraq have adopted the use of drones, using commercially bought quadcopters to drop mortar shells and hand grenades on opposition forces.

"The Russian specialists are determining supply channels, through which terrorists had received the technologies and devices, as well as examining type and origin of explosive compounds used in the IEDs," the ministry said.

"The fact of usage of strike aircraft-type drones by terrorists is the evidence that militants have received technologies to carry out terrorist attacks using such UAVs in any country." ®