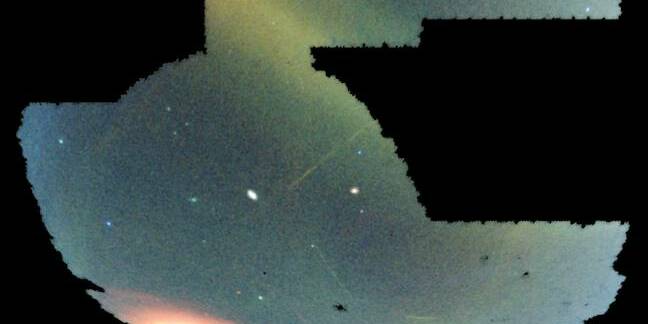 If you've got a penchant for lots of data, astrophysics, and mystery, the Dark Energy Survey (DES) has announced its first public data release.

The DES announced that the trove offers its first three years of data, complete with “information on about 400 million astronomical objects, including distant galaxies billions of light years away as well as stars in our own galaxy.”

The DES footprint is 5,000˚ square (as the announcement says, about an eighth of the sky), and the release comes from around 40,000 exposures of the survey's Dark Energy Camera.

“The images correspond to hundreds of terabytes of data and are being released along with catalogs of hundreds of millions of galaxies and stars”, the DES said.

Brian Yanny, of the US Department of Energy’s Fermi National Accelerator Laboratory, said the data gathered would have uses beyond the search for dark energy. “We wanted to enable astronomers to explore these images in new ways, to improve our understanding of the universe,” he said.

For example, DES boffins have already found eleven stellar streams surrounding the Milky Way, stars left over from smaller galaxies ours has consumed.

Those streams are evidence of a dark matter halo around the Milky Way: it exerts a gravitational pull on smaller galaxies, pulling them in, but the streams comprise few stars spread over a large area of sky, making them hard to detect.

Mounted on the 4m Blanco telescope at the Cerro Tololo Inter-American Observatory in Chile, the Dark Energy Camera (DECam) has five lenses, including a 176kg 1m unit that's currently the biggest optical corrector currently in use in astronomy.

Five filters on the instrument cover wavelengths from 400 nm to 1,800nm, with images captured by 74 CCDs.