Heart of darkness: Inside the Osówka underground city

That time the Nazis hollowed out a mountain

Lurking just outside the Polish village of Sierpnica is a relic of World War II Nazi ambition. The Osówka complex is the largest and most accessible remnant of the huge Project Riese (translation: “Giant”), an effort to create an underground city capable of housing 20,000 or more Nazi troops and workers.

The scope of Project Riese would likely cause even the bravest James Bond writer to receive a stern ticking-off from a producer concerned about cost and believability.

Work began in 1943, and while it doesn’t take an evil mastermind to guess the reason why the tunnelling came to an abrupt halt in 1945, the actual purpose of the sections dug at Osówka, in the Owl Mountains, remains a little unclear.

Conspiracy theories abound, from the caverns being used as a manufacturing and storage facility through to it being a testing ground for the Nazi nuclear effort (the rock of the mountain providing a useful barrier against any compromising emissions).

Despite the network of tunnels being abandoned more than a decade before Ian Fleming gave the titular villain his own underground lair in the novel Dr No, a trip to Nazi architect Albert Speer’s attempt to do the same for Adolf Hitler, Osówka, and its incomplete workings, cannot help but make a visitor wonder exactly what Speer had in mind when embarking on the project and what the finished version might have looked like.

Osówka is about 90 minutes from Wroclaw airport on roads of gradually worsening quality. As one nears the complex, one passes beneath abandoned railways, used to transport spoil and other detritus out of the mountain and transport other materials in.

A nondescript visitor centre (replete with café and tiny booth selling souvenirs) overlooks a car park from whence one can take a guided tour of what remains of the tunnels. The Nazis did a fine job of destroying much of the work as they retreated, but enough remains to get a feeling for the scale of the place.

There are three basic types of tour, Historical (a walk through the tunnels), Extreme (the same as Historical, except with an extra bit that would make anyone responsible for health and safety give pause for thought) and an Expedition Route, which covers the largest part of the complex and includes a look at some of the over-ground ruins. There is also an additional option targeted at children.

Being foolhardy, I opted for the "Extreme" option. After all, what could possibly go wrong?

Having paid 24 Zloty (about £5) for the Extreme tour and another 20 Zloty to borrow an English audio guide, I joined my group at the featureless entrance. No English tours were running on the day I visited, so it would be worth checking ahead if vaguely damp headphones aren’t your thing. Fortunately, on this occasion I also had a Polish-speaking friend with me, who provided a running commentary. 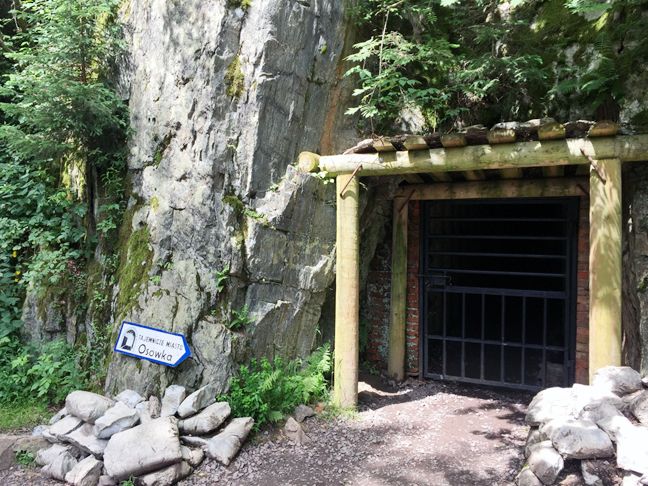 The entrance to the underground city. All pics by Richard Speed

The early part of the tour goes through some of the more complete galleries, where the rock walls have been hidden behind reinforced concrete and ceilings installed, above which cable ducts and pipework were intended to run. Pipes and gauges hint at the intent to maintain air pressure inside the mountain to keep out toxins from potential Allied poison gas attacks, while guard posts and offices appear complete and ready for occupation (if a little damp.)

As the tour goes deeper into the complex, the caverns become rougher and the effort that was required to create the spaces becomes easier to see. Smooth concrete gives way to wire mesh and finally bare rock. Visitors are provided with helmets, which soon become essential as ceilings get lower and bits of rock or reinforcing Rebar threaten to inflict concussion on the unwary. 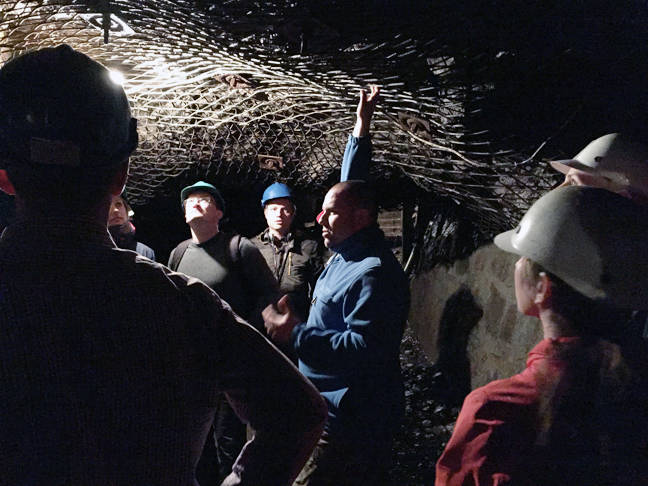 A slightly claustrophobic walk through unfinished corridors and tunnels that used to be laid with tracks for a narrow-gauge railway leads visitors to some impressive spaces cut into the mountain, with ceilings up to 8m high and decorated for theatrical effect with rusting World War II-era equipment (including something to which Sean Connery might have been tied while refusing to talk to Auric Goldfinger).

The tour guide explained that there was very little equipment left in the complex after the Nazis attempted to destroy what they couldn’t carry during their retreat, and scavengers took care of the rest. As such, some artistic licence can be excused, although further rusting relics continue to turn up as archaeologists excavate deeper into the complex. 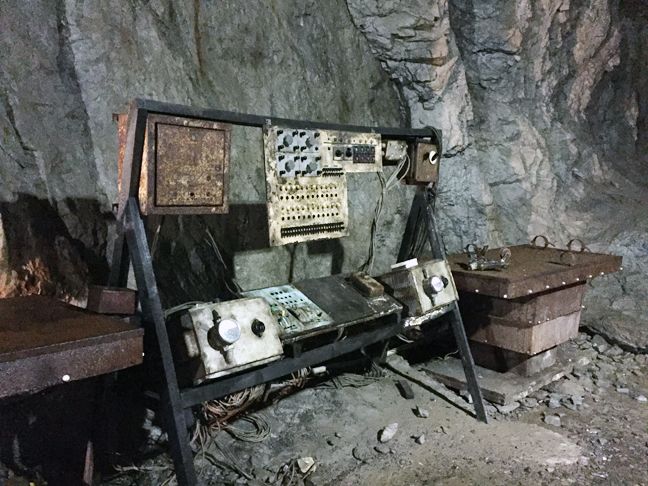 While only a very small portion of the complex was completed with concrete walls and ceiling, the tour guide claimed that had the war continued for another 18 months, it is likely the Osówka element of Project Riese would have been finished.

While that initially seems farfetched, when one considers how much was done in just two years, getting the tunnels to the point of usability by 1947 may not have been impossible. Some of the chambers retain wood forms, ready to receive concrete poured through shafts drilled through the top of the mountain and give an insight into the construction methods used by the Nazis and their Italian concrete contractors (according to the guide, the Third Reich was not above a bit of outsourcing). 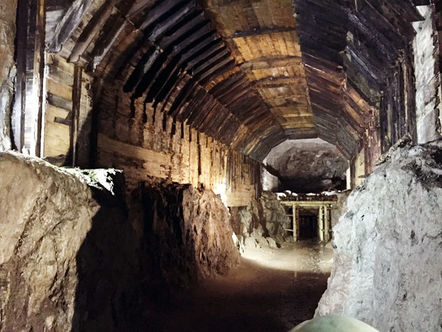 While the basic tour takes about an hour, the Extreme option adds another 45 minutes of blundering around in the darkness. Midway through the tour, Extreme participants are led to a staging area ahead of some flooded tunnels and loaded into what the Tour Guide claims is a genuine military transport, but looks more like an oversized metal bathtub floating in the water. This tub is pulled along, hand over fist, by the guide into the darkness. There is no tunnel lighting on the Extreme tour.

Once disembarked, the guide abandons the visitor group, returning the way he came and taking his torch and "military transport" with him. There is no counting people in or out here, you are very much on your own and with only a torch (for those who like to read the instructions) or the light from smartphone flashlight apps (for pretty much everyone else) to find your way through the tunnels.

Thankfully there is little scope for getting lost. The greater challenge is avoiding a dunking in the frigid waters of the flooded tunnels as visitors totter along slimy planks of wood, clutching at chains or rusting mesh suspended from the ceiling. The flooding in this area of the tunnels is not deep, as at least one person found out after their iPhone took an unfortunate dunking, but the experience is sobering, as one considers the unfortunates that were forced to carve the spaces out of the rock.

After a good deal of shouting, some whimpering, and one or two accidental splashes, the Extreme group returned for the remainder of the Historical tour.

Towards the end of the tour, the guide began to talk through the human cost of the tunnels through which we were walking. After showing us a mine-cart (“the wheels still turn – German engineering”) and caverns large enough to drive tanks through, the guide explained the toll taken by working in the mines.

Some 13,000 forced labourers and prisoners from surrounding concentration camps, such as Auschwitz, were put to work digging out the mountain at Osówka and building the surface structures. It is estimated that 5,000 people died in the effort and 14 were executed during failed escape attempts – the mean life expectancy for a worker in the caves was around four months mainly due to disease, malnutrition and the dangerous work. The sheer scale of the Nazi megalomania and the price paid in human life is sobering.

For those interested, the Auschwitz-Birkenau museum is a three-hour drive from Osówka, and I would recommend pre-booking a tour and plan for a day there before setting off.

All tours are guided, and prices range from 18 Zloty (£3.82) for the basic hour-long tour up to 70 Zloty (£14.85) for a three-hour "adventure" tour, although you will need a group of at least 10 people in your group and some warm clothing. The Extreme tour is likely enough for anyone who is interested in the architectural artefacts of the Third Reich, and wants to get a feel for the underground environment. Just don’t forget your torch.

It is open all year round (other than Christmas and New Year) and the opening hours are 10:00 – 18:00, with tours staggered throughout the day. It is best to book ahead of time and bring a print-out of the confirmation rather than turning up on the day, and also check if and when tours in your native language are running.

Since the tour will take around two hours (for the Extreme version) there is also scope to take a 30-minute drive to another part of Project Riese, Wlodarz, where yet more partially flooded tunnels await. Sturdy boots and a flashlight are essential equipment there. The website for Wlodarz can be found at wlodarz.pl. ®