Business user file sync and sharer Box "sank" for some users late last week, who took to forums and social media complaining they could not see any of their files.

One Reg reading Box user told us he'd "lost" four years' worth of files, saying: "They have no phone support... the long and short of it is that files that have been uploaded to the Box service have just vanished without a trace.

This morning he told us: "My files are now back and safe and I have made a physical backup of them, and I am now moving to another storage location.

He took issue with the vendor's "slow response" and lack of "blog posts, apologies or Twitter messages".

Notes about the issue started appearing on the Box Community forum on Thursday and Friday last week, and it appeared to affect both Mac and PC users.

Although no technical insight into the issue was provided, Box community manager "Brent" posted a response on Friday assuring users Box support was working on the issue and that no files had actually been lost: 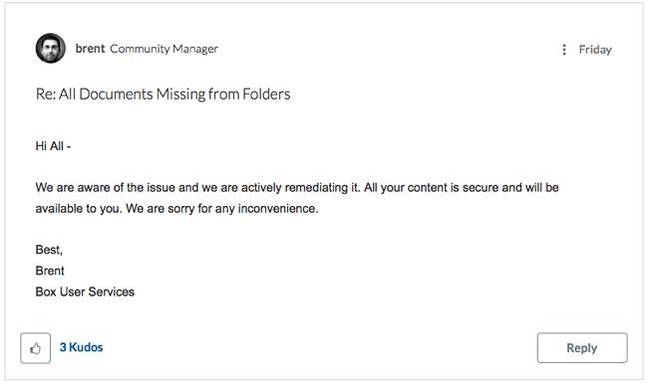 The lost documents started re-appearing in affected users' folders later on Friday and over the weekend.

We've asked Box for a comment and will update when we hear back. ®