CPU utilization up, throughput down, but a second fix may have restored normal service

Log-sniffing vendor SolarWinds has used its own wares to chronicle the application of Meltdown and Spectre patches on its own Amazon Web Services infrastructure, and the results make for ugly viewing.

The image below, for example, depicts the performance of what SolarWinds has described as “a Python worker service tier” on paravirtualized AWS instances. 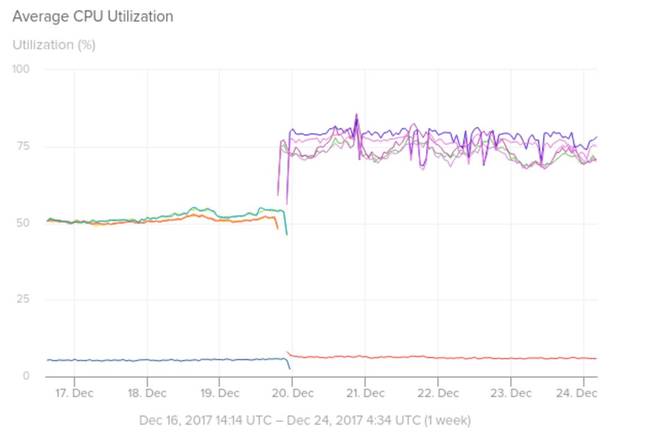 Performance of SolarWinds Python worker service tier on AWS, before and after patches. Click here to embiggen

The company also observed the CPU utilization of its EC2 instances as patches rolled out across different AWS availability zones. The results, depicted below, aren’t pretty. 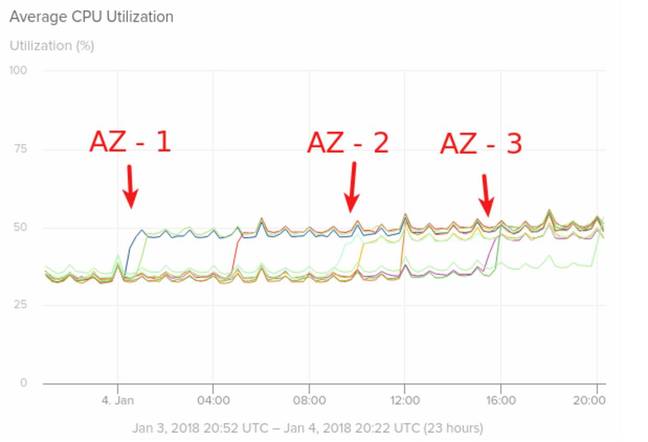 SolarWinds has created other visualizations of its cloud post Meltdown/Spectre and most of the results are ugly. Throughput was down as much as 40 per cent on its Kafka rig, while CPUs spiked by around 25 per cent on Cassandra.

But there’s also some good news: the company has noticed some CPU utilization rates falling and has guesstimated that it could be as a result of second-generation patches that address Meltdown and Spectre more elegantly than AWS’ first fixes.

New EC2 hot patches for Meltdown/Spectre rolling out? Previous CPU bumps appear to be dropping off starting after 10:00 UTC this morning. pic.twitter.com/OL5N5TNG1s

Let’s hope SolarWinds is right, because the first lot of graphs it produced suggest that Meltdown and Spectre will make many current rigs more expensive to operate, inadequate for the jobs they were rated to perform, or both. ®