Forex head alleged to have manipulated market in 'front-running' scheme 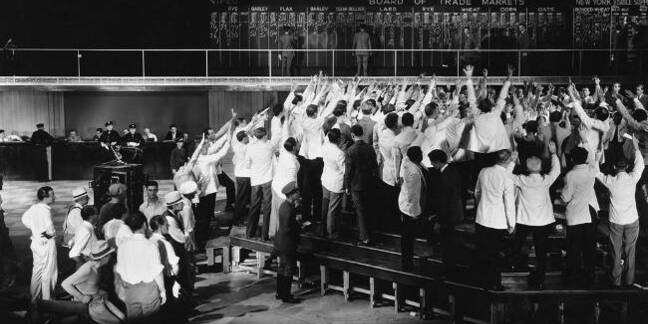 The former head of foreign currency exchanges at Barclays New York has been charged in the US with devising and executing a "scheme to defraud HP of money and property", according to an indictment entered yesterday.

Robert Bogucki is accused of six counts of wire fraud, and one count of conspiracy, after Feds alleged he used his knowledge of HP's financial affairs to benefit himself, his co-conspirators and the bank in 2011.

The indictment claims he was assisted by two unnamed individuals, the most important identified only as CC-1, a UK citizen who was a senior foreign exchange trader in the London branch of Barclays.

In August 2011, HP was preparing to buy UK-based Autonomy, and bought £6bn of "cable options", agreements to make dollar-pound exchanges at a fixed rate at a certain time, from Barclays in order to make the transaction. Soon after, HP changed its mind about using the options to acquire the company, and contacted Barclays about selling them back in several chunks.

Between 27 September and 4 October 2011, the indictment alleges that Bogucki and his co-conspirator used this knowledge to engage in an illegal practice known as "front-running". The claim is that each told their subordinate traders to sell the bank's existing cable options in the days before the agreed transactions with HP.

According to the indictment, CC-1 said the pair would "just spank the market like good and proper", while Bogucki is alleged to have told CC-1: "You should like offer this fucking shit [the cable options] down." Bogucki is also accused of warning one junior trader that "[his] ass [would] be in a fucking frying pan in November" if he wasn't discreet about the trades.

It is claimed that the sales flooded the market and drove the price down. This allowed Barclays to buy from HP at a relatively discounted price, making the bank millions of dollars at the expense of the IT company.

The six counts each relate to an exchange between Bogucki and HP's representatives, in which Bogucki allegedly lied to the company about the causes of the low option prices, and said he was doing all he could to help them.

Bogucki, who has been on leave from Barclays since November 2016 but is still an employee, pleaded not guilty to the charges in Brooklyn federal court yesterday.

"He tried hard to do right by HP while following the rules that governed market-makers in foreign exchange for many years. This action is nothing more than an unfair and misguided attempt to rewrite those longstanding rules."

The case, USA v Bogucki, was filed, and will proceed, at California's Northern District Court in San Jose.

The Register has asked HP and Barclays for comment. ®