Naturally we demanded proof – and we got it

We've heard enough about it, let's take it for a spin

The F-35 full cockpit simulator at the press event had been set up in London, as part of Lockheed Martin and the Ministry of Defence's efforts to tell the Great British Public that the heart-stoppingly expensive "fifth generation" aircraft really is worth its £100m-ish price tag. 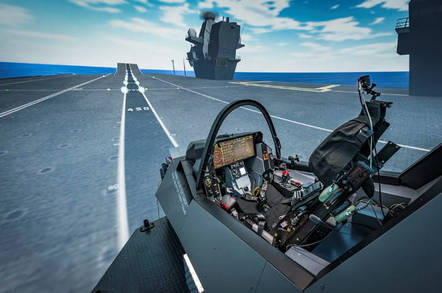 The full cockpit simulator at BAE Warton. Ours was mostly similar

As part of this, your correspondent was cordially invited to have a go at landing the jet on an aircraft carrier. Frankly, it was so easy anyone could do it after being told which three buttons to press.

The F-35's control layout is surprisingly similar to an Airbus airliner, at least in terms of where the control column (well, stick really) is positioned: directly under the pilot's right hand. The throttle sits on the left-hand side of the cockpit. Both are festooned in knobs, rocker switches, buttons and triggers – to the point where your correspondent wasn't entirely sure how to hold the control column without accidentally bombing the USS America, the target landing ship. 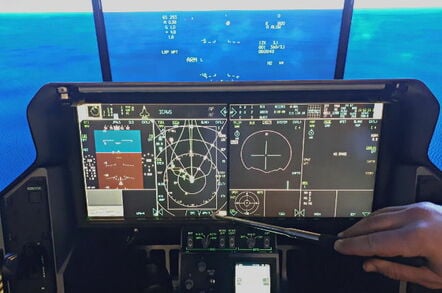 The F-35 simulator cockpit, pilot's view. The instrument display is a single touchscreen unit which is fully customisable to the pilot's preferences – they can even resize and expand windows, something unheard of on military aircraft

As for the landing itself? Andy leaned over: "Put your vector on the back of the boat... that's it." The F-35's systems lock onto its home aircraft carrier and puts a little green circle around the spot on the deck to land on – something that would be very useful in a) finding the ship from long distances and b) actually landing. The pilot's heads-up display (HUD) includes a moving vector symbol that tracks where the aircraft is actually going at any given point. To land, you simply move the jet to put that vector on top of the landing spot circle (after making sure you're approaching from the carrier's stern and not about to fly into the island, or something equally clottish).

Then comes the real magic. Andy leaned in again and pressed a button on the throttle. "That's the lazy button. You can either manage the aircraft's thrust yourself or let the computers do it for you." Even as my mind boggled at this, Andy continued: "There's another one on the stick. If you're coming back after a sortie and decide 'I can't really be bothered' you can let the aircraft fly itself down."

I laughed. "What's the catch?" Andy laughed too. "It's cruise control on steroids." 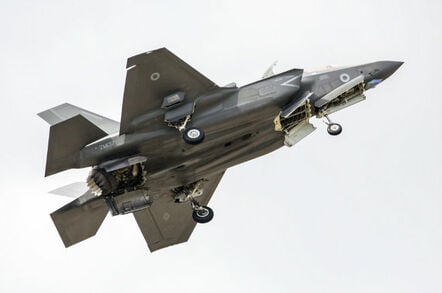 And there it was. The F-35 can precisely manage its own speed on landing and even fly itself in while you sit back and enjoy the view. This isn't your airliner autothrottle/ILS combo either: the jet is capable of almost seamlessly managing the transition from horizontal to vertical flight entirely on its own before gently settling itself on deck. If you weren't paying attention you'd miss it completely, other than for the F-35 slowing to a speed that would make a conventional fixed-wing aircraft fall out of the sky.

For the landing itself, Andy once again reached in and tapped some buttons on the throttle. "I can increment or decrement your closing speed," he said, dialling up and down the F-35's speed relative to the carrier. There's no tricky mental maths as you reconcile off your own airspeed against the windspeed over the ship's deck: the F-35 does that for you, displays the closing speed on the HUD, and then gives you the luxury of pressing a button to precisely adjust that speed. You could literally sit there and take photos, it's cheating at aviation.

After we landed (and landed again – I didn't quite get the nose down so it quietly wandered back into the sky while we chatted), taking off was as simple as cracking the throttle and pulling back on the stick. The F-35 rose vertically, started flying forwards and Andy then tapped the "vertical fan on/off" button once the airspeed rose: "It's as simple as that."

I then tried some actual flying. Aileron rolls were just as you'd expect from a state-of-the-art fighter jet but the F-35 was noticeably sluggish in pitch, to the point where, while trying to recover from a botched approach that was far too high, fast and steep, I "entered submarine mode", in Andy's words – a result that surprised me from ~400ft at 210kts, around 30-40 degrees nose down. Granted, it's a beyond-visual-range air superiority fighter, not a prop-driven chugalug, but then again I'm just a bloke who likes aeroplanes.

All in all, the F-35 is dead easy to fly and the high level of automation in its systems mean the pilot has more than enough spare mental capacity on hand to focus on operating its sensors and weapons instead of basic aviating. It will certainly be a leap ahead in aviation terms, and might even make the price per aircraft worthwhile. ®

Your correspondent's practical flying experience amounts to 10 hours in a motorglider with the Air Cadets more than a decade ago, plus about the same time again in piston-driven Grob Tutor training aircraft, and a few hours buggering about on Flight Simulator. In addition, the F-35 "flight" described above was on a simulator in theoretically ideal flying weather with a very low fuel loadout. Take the flight test review with a large pinch of salt.