Anyone who has grown up watching the antics of Apollo astronauts aboard Skylab or the acrobatics of Shuttle and ISS crews has likely dreamed of experiencing weightlessness. Ideally in a way that doesn't involve either a sickening drop in an elevator or alarming turbulence over the Atlantic.

But for those lacking the budget to buy a ticket to the ISS, or reserve a seat on whatever Jeff Bezos or Beardy Branson end up launching, the next best thing is a flight aboard an aircraft used for zero-gravity training and research.

I took a trip onboard Zero Gravity Corporation's Boeing 727-227, a former cargo aircraft with the interior stripped out and refitted like a long, sausage-shaped padded cell and equipped with a few rows of seats in the rear for participants to occupy during landing and takeoff.

The weightless effect is achieved by flying the aircraft through a series of parabolas, starting at 24,000 feet and flying to 32,000 feet while increasing the angle of the aircraft to the horizon to 45 degrees (pinning guests to the floor of the cabin with the force of 1.8 gs). The pilots then cut thrust and push the aircraft into a dive, which creates the feeling of weightlessness. This lasts for around 30 seconds before the pilots pull up and the process begins again. 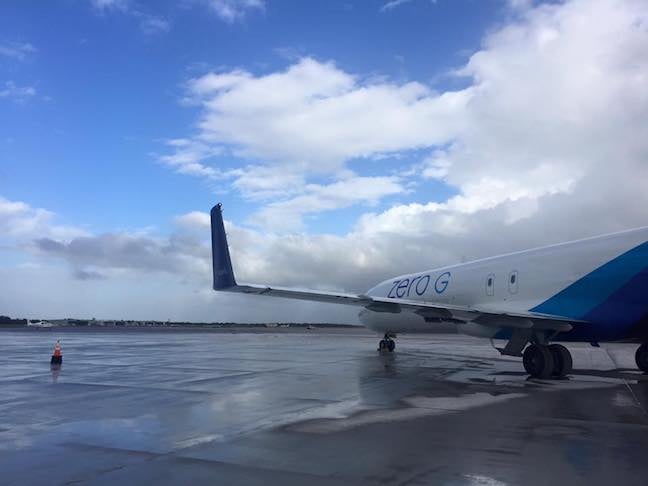 'I just remembered, I left the cooker on... Sorry!'

The sensation of zero (or micro, for pedants) gravity is difficult to describe. Imagine you are on an aircraft beginning its descent for landing. The engine noise might change, and you feel yourself rise slightly in your seat. Now, imagine you just keep rising. That is pretty much how the weightless sensation begins, with a rise from the floor. The immediate instinct is to try to swim (which is one of the many things guests are instructed not to do) but of course, nothing happens since you are swimming against air.

Somersaults and circus acrobatics can easily be performed before the crew announce that gravity is coming back, the engine note changes again and you return to the floor, lying on your back, looking at the ceiling. And then it happens again, but this time you start to navigate the weightless space by gently pushing with your fingertips and begin to understand what it must be like to be in space. And then gravity comes back again. And it so it goes on.

All in all, 10 zero-gravity parabolas are flown with additional shallower parabolas to simulate Martian and lunar gravity. The crew provide jellybeans and squirts of water during weightlessness to allow guests to mimic the antics of astronauts performing for NASA TV before finally arranging for groups of participants to do "The Superman" and fly down the length of the fuselage. Friendlier guests might attempt impromptu games of volleyball, with one person curled into a ball.

No oysters beforehand... and go to the loo

While research flights will often perform 50 parabolas, the average tourist is likely to find 10 or so more than enough. Indeed, after the first five, several guests had had to return to their seats at the back of the aircraft and endure the rest of the experience with head between knees. One unfortunate chap, who hadn't followed advice on what to eat and drink beforehand, was spectacularly ill – quite a sight to behold both in zero-g and also when gravity returned, with his lunch making a sudden splashdown. 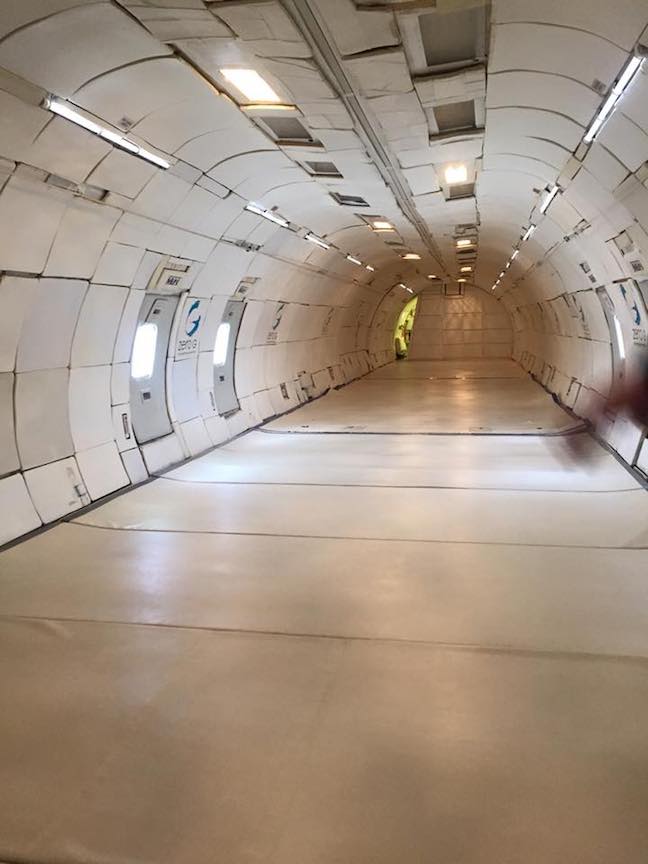 So much space for activities!

As well as instructions on what not to eat and drink, and handing out motion-sickness tablets, Zero-G also wheel out the pilots to allay the worries of nervous fliers. The physics of the manoeuvre are explained as well as the modifications required to the aircraft. The 42-year-old 727 is "built like a tank", according to the captain, with only pumps for the hydraulics and other fluids needing to be beefed up. The forces of the parabola itself are well within the design limits of the airframe. There are also no toilet facilities, just a sealed bucket for emergencies. So, go once and go often before boarding.

I was surprised to learn that the flight crew dispense with computer aids to fly the parabolas, relying instead on years of experience and a bright yellow rubber duck. "We watch that duck float in the cockpit," the captain revealed. "Whatever it is doing, you guys are doing the same behind us." Thus, all that stands between passengers bouncing off the ceiling or slamming into the rear bulkhead is a bath toy and some really good flying. "It's quite a spectacular manoeuvre, from the cockpit standpoint," observed a former Royal Air Force pilot who now flies Airbus 380 aircraft for a living.

"It isn't just the pitch, but any yaw is going to send the passengers into the wall. And you're right on the edge of stalling the aircraft. A modern airliner would kick in the thrust automatically." An Airbus 380 would be quite an impressive zero-g aircraft, I observed. "Yes, the deck can come out and you'd have a huge space inside. It'll go from -1 g to 2.5 g and since it can fly higher, you'd probably be able to get longer in zero g."

Something to do on the next tedious long-haul flight?

"No, the computers only allow up to a 30-degree pitch up and 15-degree pitch down. Head office would have some strong words to say if we tried anything like that. Although in the RAF, if the engineers lost any tools we'd sometimes do a parabola to float any loose items up. Or maybe an inversion."

Something to consider, then, the next time a passenger loses some coins down the side of the seat.

A flight onboard Zero Gravity Corporation's Boeing 727 will cost in the region of $4,950 (£3,594) and flights depart from a variety of US locations. Check out www.gozerog.com. It remains the most expensive set of overalls I have ever purchased (you get to keep your "flight suit") but also one of the most memorable experiences.

There is, of course, a Russian option (in keeping with the Space Race of the 1960s) in the form of the larger Ilyushin-76 MDK, which flies from Chkalovsky, about 90 minutes' drive from Moscow and costs €4,000. More details can be found here. ®