Iconic lads' mag Playboy is suing oddball internet culture website Boing Boing for linking to an Imgur archive featuring scans of centrefold models from over the years – a move described by the US Electronic Frontier Foundation as "frankly mystifying".

Playboy Entertainment Group filed suit against the business behind Boing Boing, Happy Mutants LLC, on the grounds that a 2016 post (safe for work) ripped off the labours of the late Hugh Hefner's empire.

The post as linked above is substantially unchanged from a screenshot contained in Playboy's original complaint to the US District Court in Central California. 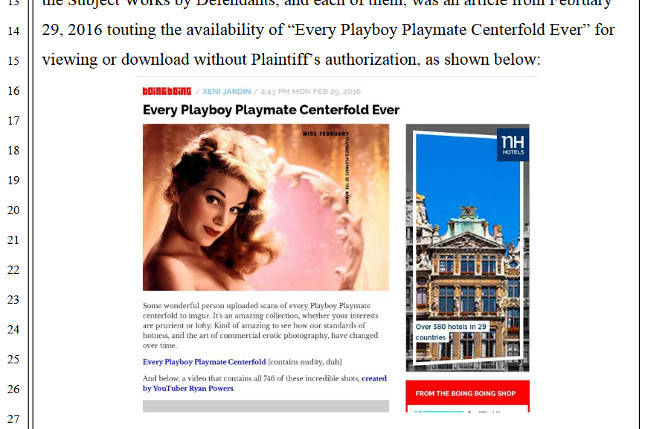 In the article was a link to the gallery, on anything-goes image hosting website Imgur, which was said to contain a scan of every single nude centrefold model throughout the magazine's history. A YouTube video had been embedded as well, which contained a slideshow of the scans. Playboy's lawyers told the court that Boing Boing had "used and distributed" the naughty snaps and "exploited" them, as well as "knowingly induced, participated in, aided and abetted in and profited from the illegal reproduction" of the photos, in part because Boing Boing profits from displaying adverts around its blog posts.

Unsurprisingly, neither gallery nor video is online at the time of writing. Boing Boing has asked the court to dismiss the claim and denies any infringement: "Rather than pursuing the individual who created the allegedly infringing archive, Playboy is pursuing a news site for pointing out the archive's value as a historical document."

A possible motivation for Playboy's lawsuit may be the launch of an officially sanctioned book titled "Playboy: The Complete Centrefolds" (no link, you dirty sods can have that on your online search conscience) in August 2017. ®

The millionaire former playboy, Hugh Hefner, and a crucial fight over playboy.london

Analysis And the weird world of WIPO

Officials scoop up bacteria bubbling away in Playboy hot tub

Possible cause for Domainfest outbreak

Playboy on iPad will be 'uncensored', says Hefner

Less need for the 'really good' articles these days?