Commvault has reported record quarterly revenues but took a dramatic GAAP thrashing due to US tax law changes.

Net loss was $58.9m, but Commvault said it recorded approximately "$59.0m of non-cash income tax charges related to the combined impact of the lower US corporate income tax rate on deferred tax assets and recording a valuation allowance against the remaining value of deferred tax assets". 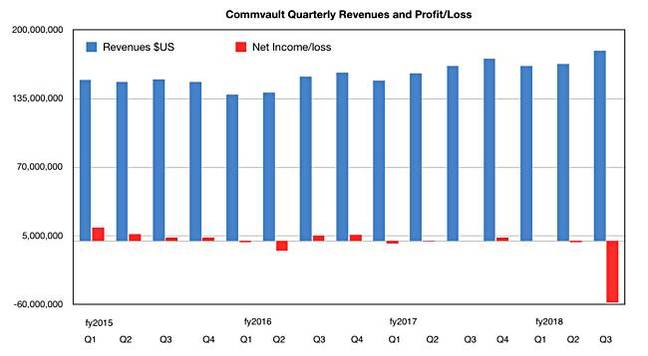 Operating cash flow in the quarter was $31.2m, a 17 per cent year-over-year increase.

It looks good, except the Street was expecting more.

William Blair analyst Jason Ader said: "Commvault reported weak fiscal third-quarter results this morning, missing consensus by $2m on revenue and $0.01 on earnings per share. Software revenue was again the culprit, coming in $3m below consensus, though up 13 per cent sequentially. Services revenues was strong (up 12 per cent year-over-year), which is helping offset some of the software weakness."

Wells Fargo senior analyst Aaron Rakers talked of a modest revenue and earnings-per-share miss. Guidance for the next quarter will be forthcoming in the earnings call. ®