For the first time, an internet company has become the largest lobbyist in Washington DC.

With the release of fourth quarter lobbying figures – a legal requirement – it has been revealed that Google (well, Alphabet) spent no less than $18m in 2017 to lobby lawmakers in the US capital: a 17 per cent increase on the previous year.

Although a number of industry associations – such as the US Chamber of Commerce – spent more, Google is the largest corporate entity on the list, reflecting both its enormous influence, it's bottomless pockets, and the tech industry's efforts to push back on a growing consensus that the internet is in need of greater regulation.

This huge lobbying spend does not represent the full picture when it comes to influencing Washington DC, either.

The lobbying releases only cover the costs of a company's own employees: they don't include the money that all these companies spent on third-party lobbying groups, who typically boast former high-level government officials and promise access and persuasion for very large sums. Nor does it cover donations made to campaign committees.

It is no coincidence that the record spending comes in the first year of the Trump administration given the president's frequent criticism of Big Internet and his championing of causes that go against their business models, such as plans to drastically reduce the number of legal skilled immigrants into the country.

Google in particular has also lost its ready access to top figures in the White House – the relationship between the search giant and the Obama administration was famously tight, and it had been carefully extended to Hillary Clinton's campaign (which as well all known went really, really great.)

Google and friends have been extremely active during the recent tax reform discussions in which a number of proposals threatened to have a significant financial impact on the corporations' bottom lines.

And then there is the growing threat of regulation against internet giants that many feel have too much unrestrained power and influence on citizens' every day lives, not least of which is a threat to regulate online advertising – the largest source of Facebook and Google's vast profits.

On top of which, Big Internet and social media giants in particular have been the focus of significant ire over their spreading of fake news and divisive content: a practice that they profited from and then went to some lengths to deny had had any real impact. 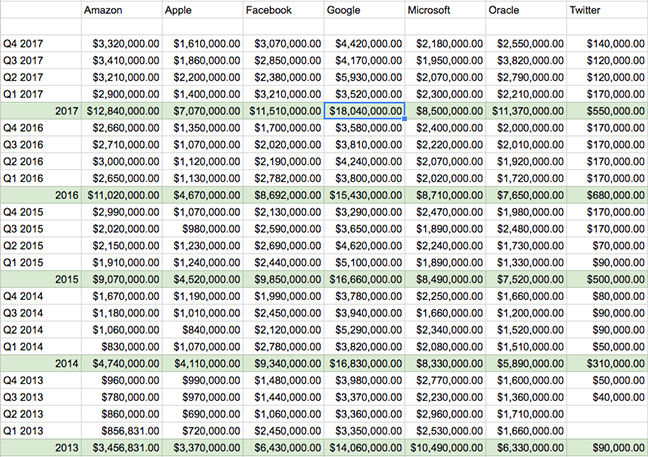 Just this week at the World Economic Forum, a number of high-profile figures attacked the technology sector, with Salesforce CEO Marc Benioff saying that Facebook was addictive and should be regulated like big tobacco. He also slammed tech CEOs for their selfish, authoritarian attitude.

Wikipedia founder Jimmy Wales later joined in, also slamming Facebook for its role in pushing fake news. Although quite why Wales was at a conference virtually dedicated to the world's elite businessmen and politicians is another matter.

All of which adds up to a pretty dire time for Big Internet that just two years ago were the darlings of society with lawmakers queuing up to argue why they should be exempt from normal rules and regulations.

So what do you do when you are under fire for having too much power and too much money? You spend it. And it works. By taking the top slot, Google ousted typical corporate contenders for largest lobbyist: from the cable, drug and defense industries.

This year, AT&T and Comcast are celebrating having beaten back net neutrality rules, even getting a federal regulator to undermine its own rules that it devised just two years earlier.

The defense industry has received yet another massive budget boost to the US military. And the drug industry continues to make vast profits from a health industry so distorted and inefficient that it makes the mind boggle.

In Washington DC, money talks. And Big Internet has a lot to talk about. ®