Easy with those exclusives and unfortunate facts, hacks 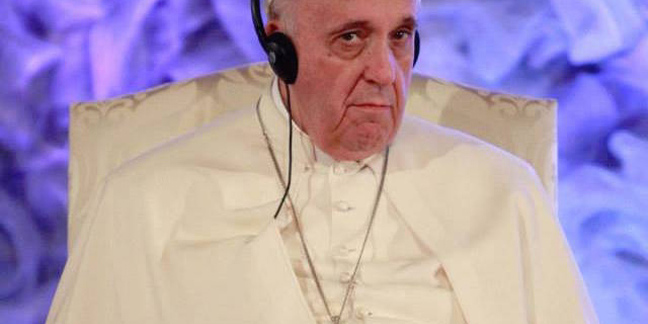 Take it easy with those hard-hitting exclusives and investigations, said the Pope this week, lumping inconvenient quality journalism with fake news and clickbait.

We can't think why the head of a church mired in decades of globe-spanning child abuse scandals would have a problem with hacks doing their job and getting straight to the point.

Instead, journos should slow down, and take a softly softly approach, Cool Frankie declared today. While insisting he is all for quality accurate reporting that covers important issues facing society, the Pontiff couldn't help but reveal his disdain for scoops and stuff that makes people uncomfortable. Why can't you scribes just be, you know, nice, he seemed to sigh.

Again, we just can't think why he'd take that line.

"Made in the image and likeness of our Creator, we are able to express and share all that is true, good, and beautiful," His Holiness offered. "We are able to describe our own experiences and the world around us, and thus to create historical memory and the understanding of events. But when we yield to our own pride and selfishness, we can also distort the way we use our ability to communicate."

God's mortal deputy went on to reference Genesis 4:4-16 and 11:1-9, the stories of Cain and Abel and Tower of Babel, as examples for the harm caused by playing it fast and loose with reality.

"The capacity to twist the truth is symptomatic of our condition, both as individuals and communities," the Pope said. "On the other hand, when we are faithful to God’s plan, communication becomes an effective expression of our responsible search for truth and our pursuit of goodness."

When it comes to journalists, Frankie says: relax

The pontiff declared scribes should set aside the chase for breaking news in favor of making sure they get things right and tell the actual story. Of course, articles need to be accurate and fair. However – and call us jaded if you wish – when people say hacks should report the "actual story," they really mean "our version of the story." And the truth doesn't play a starring role in those versions.

"Amid feeding frenzies and the mad rush for a scoop, they must remember that the heart of information is not the speed with which it is reported or its audience impact, but persons," said a bloke who talks to an all-powerful invisible alien in the sky.

"Informing others means forming others; it means being in touch with people’s lives. That is why ensuring the accuracy of sources and protecting communication are real means of promoting goodness, generating trust, and opening the way to communion and peace."

Knock it off with the fake news, in other words. Which we can get behind. It's just a shame Francis mixed tut-tutting at bogus clickbait stuff with bashing legit exclusive journalism.

His Holiness later put his views in a more succinct form for da yoof:

There is no such thing as harmless disinformation; trusting in falsehood can have dire consequences.

Today's declaration from the Vatican's Woke Uncle comes as social networking websites continue to grapple with their roles in blatant propaganda campaigns. Last year, Facebook fessed up to taking six figures from Kremlin-connected organizations bent on interfering with America's politics during the 2016 White House race.

Last week, Twitter also admitted that not only did it run propaganda as promoted tweets, but let some 677,775 twits follow and retweet content from accounts that were actually Russia-controlled bots. Dorsey and co. also admitted they underreported the number of bot accounts circulating on the service by about 13,500.