Dell board meeting: What've we got on the table? Sparkling, still, sarnies... and oh, IPO?

Well... that was unexpected

Analysis Four years after Michael Dell took his company private, he is considering whether Dell should make a stock market comeback, or so "familiar sources" have told a slew of newsfolk.

"People familiar with the matter" told Bloomberg – and later blabbed to WSJ, Reuters, FT and others – that an upcoming Dell board meeting was going to consider an IPO as a way of raising funds and boosting revenue.

Dell went private, using Silver Lake Management, back in 2013; bought storage titan EMC along with its stake in VMware for some $67bn in 2015; and has spent over a year integrating the business, cutting internal costs, chopping a copious amount of heads and becoming more "efficient" with a string of reorganisations.

About the best thing that might happen to Dell is that it ditch the PC business if it can't make money, befriend and Advanced Micro Devices that wants to make Opteron and ARM server chips, and build up a credible enterprise systems business, with lots of research and development.

Today, Dell is the world's largest privately owned technology company and has close to $50bn in debt – Bloomberg reckons $46bn, Reuters says $52.5bn – because of going private and its purchase of EMC. The assumption is that it would like to reduce that debt. Other options the "familiar people" say will be laid before the Board apparently include buying in VMware, whose shares are on a rising trend, and selling off Pivotal, worth between $5bn and $6bn – or, of course, going public.

Reuters suggests an IPO is not the only alternative for Dell. It wants to grow and the company could make more acquisitions to do that. The EMC business hasn't delivered as much revenue and profits as hoped, the data centre market is challenging, facing public cloud competition, and there are increased component costs.

Acquisitions would likely increase Dell's debt. But an IPO would enable an exit for Silver Lake and a way for Dell to reduce its debt. The US tax law changes affecting many company's GAAP profits could make the debt load heavier as tax deductions for debt interest expense are being capped at 30 per cent of annual EBITDA* revenues.

Consider for a moment this diagram: 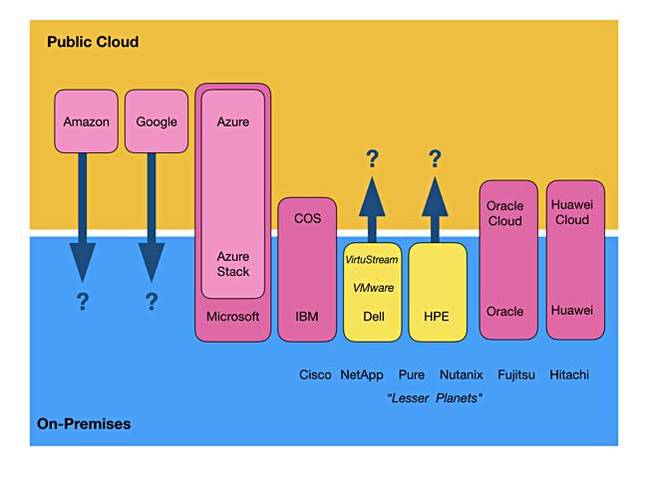 It shows the world of on-premises and public cloud IT infrastructure suppliers.

We see Amazon, Google and Microsoft dominating the public cloud space. We see IBM, Dell, HPE, Oracle and Huawei, along with Microsoft, being the major on-premises IT infrastructure suppliers. Cisco is not present because it is overwhelmingly a network plumbing supplier, minor server supplier and even smaller HCI supplier.

We see Microsoft having a presence both in the cloud, with Azure, and on-premises, and know it has bridge products/services like Office365 and AzureStack.

There are IBM, Oracle and Huawei – three suppliers with historic on-premises bases – who are moving into the cloud. There are also two public cloud suppliers who could move into the on-premises world, following the trail blazed by AzureStack – to wit: Amazon and Google.

There is a set of lesser suppliers below these giants – NetApp, Pure, Nutanix and others – who haven't a hope in hell of setting up their own public cloud operations as they are far too small.

And there are two major on-premises suppliers who have no significant public cloud presence (Dell) or none (HPE).

Here are annual revenue numbers to show the comparative size of some of these suppliers:

A post-IPO Dell would absolutely have the financial muscle to go into the public cloud business. It builds server kit for hyperscalers. It has VMware, Virtustream, Pivotal and Boomi among its assets. Its smaller US competitors, IBM and Oracle, are already well advanced on their own public cloud entry efforts.

Its major US competitor, HPE, will very soon be run by a non-visionary, safe-pair-of-hands CEO, Antonio Neri, with Meg Whitman having, as she would see it, cleared up the mess she inherited and swanning off to her next gig.

HPE is now half the size of Dell and seems to have little strategic vision beyond hybrid cloud, composable infrastructure and IoT. We can't see HPE becoming a $100bn company in the next five to 10 years on that basis. But we do think Dell has that ambition. And we think the road to that revenue number runs through the public cloud.

That would be the right response to public cloud erosion of on-premises revenues, as being done by Microsoft, Huawei, IBM and Oracle.

The Register's storage desk thinks Dell has a possibly post-IPO vision that includes going into the public cloud, with Dell IoT edge devices feeding data to it for Dell services to analyse and manage. ®