Timeout everyone. Y'all know that Musk's $500 'flamethrower' is literally a Boring blowtorch?

A flame shower not a grower 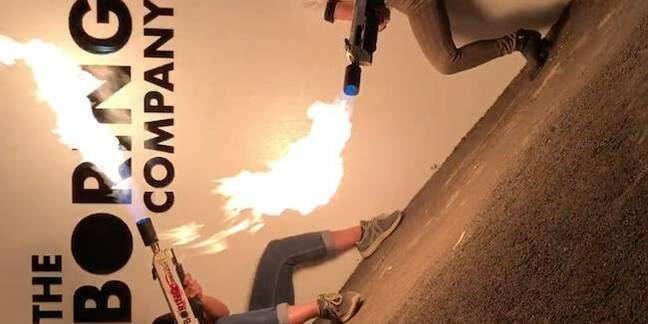 You've got to hand it to Elon Musk – the guy could sell pork pies at a rabbinical convention.

Over the weekend, his Boring Company started flogging thousands of "flamethrowers," netting the Tesla and SpaceX billionaire a cool $4.5m in sales as the internet went bananas for the gimmick.

The $500 devices went on sale on Saturday, with Musk promising on Twitter the machines are "guaranteed to liven up any party." Over 9,000 have been ordered, he said, with another 10,000 or so units still in stock.

"Obviously, a flamethrower is a super terrible idea. Definitely don’t buy one," Musk stressed, before adding: "Unless you like fun." Or destroying the undead: "When the zombie apocalypse happens, you’ll be glad you bought a flamethrower. Works against hordes of the undead or your money back," he beamed.

"But wait, there’s more: the flamethrower is sentient, its safe word is 'cryptocurrency' and it comes with a free blockchain."

How the other half live. Here's a video of Musk having fun with his latest thing:

"Buy an overpriced Boring Company fire extinguisher!" the biz also offers. "You can definitely buy one for less elsewhere, but this one comes with a cool sticker and the button is conveniently riiight above."

Haha, yes, all fuuuun and gaaaaames. But let's be real: the "flamethrower" is basically a glorified propane blowtorch of the type commonly used by gardeners for burning weeds, and for clearing snowy driveways, and for trying to look cooooooool. Such prosaic hardware typically goes for a couple hundred bucks, however, as Boring points out, such machines don't come with a cool sticker. And Boring's does, apparently.

Wasn't Boring supposed to be making a tunnel or something?

Given the availability of firearms and similar weapons in America, it should come as little surprise to you that real flamethrowers are legal to own and operate in most US states. California has some restrictions, of course, namely that the flame can't be more than ten feet long. In Maryland, they are banned completely.

Elon's electric-powered flame-shower certainly looks legal, even in California. The gas flame looks moderately impressive but pales into insignificance compared to proper flamethrowers that shoot either jellied gasoline or ethanol.

Take, for example, the XM-42M flamethrower, legal in 48 US states and yours for a touch over double Elon's asking price. This handheld puppy shoots fuel up to 30 feet and makes the Boring Company kit look like what it is, a puny tool for puny tools.

Splash out a little more and you can pick up a X15 flamethrower, which has a backpack fuel and pressure tank. and will be delivered to your door with tanks of napalm for barbecuing flora and (hopefully not) fauna.

Then again, in just one week, Elon's SpaceX team could show us a real badass flamethrower. Its Falcon Heavy has completed its first static test burn, and a launch date has been set for February 6 from Cape Canaveral in Florida, USA.

Given the experimental lifter has to coordinate firing 27 rocket engines simultaneously, dump an electric car into orbit, and then land three boosters, we're looking at a huge opportunity for a really interesting fireworks display, folks. Musk himself has said he's hopeful it'll all go off without a hitch, or if not, that the rocket explodes high enough up to avoid damaging the launching pad.

At least the Falcon Heavy is going to be a useful piece of hardware. The Boring Company's toy is unlikely to be used for much except kicking off house fires at parties, losing rental deposits to flame damage, and causing minor burns. ®

Stand by for 'targeted marketing'

You'll never guess what US mad lads Throwflame have strapped to a drone (clue: it does exactly what it says on the tin)

Can of deodorant + lighter = hospital

Doom Eternal: Reboot sequel is cluttered but we're only here for the rippin' and the tearin'

The RPG In which case, it'll do

New builds and end of life: The cosmic ballet at Microsoft goes on

Of course Uber allegedly had a tool to remotely destroy evidence