DRAM, it's good to be in storage... for some

It's been a week, hasn't it, storage fans?

So after a week of replicating, virtualising, backing up and inhaling and puffing out data to the cloud it is time to check what has been happening in the land of storage.

We have news on Portworx and HPE, Pure Storage, SK Hynix, SpectraLogic, StorMagic, plus snippets on Gridgain, Snowflake and Virtual Instruments...

Grab a caffeinated beverage and read on. 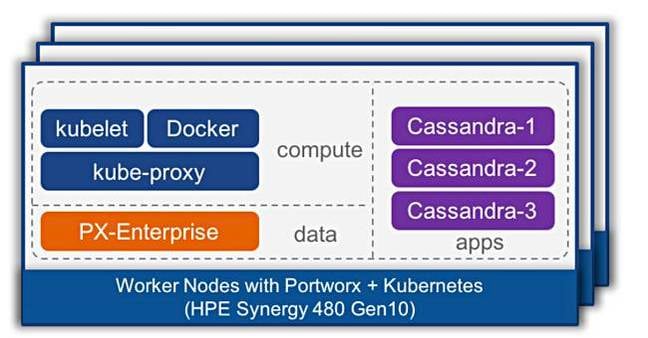 Portworx and Kubernetes on HPE Synergy. Picture from SiliconAngle.

Get more info on the reference configuration here.

Purity 5.0 supports ActiveCluster and its an active/active synchronous replication and multi-site stretch cluster tech that delivers zero RPO and zero RTO across racks, data centres or metro regions at no extra cost. ActiveCluster support is installed via a non-disruptive software update.

Pure says conventional synchronous replication and stretch cluster products have been complex and costly, with setups ranging from days to weeks, and involving hundreds of pages of manuals. The licence fees, external gateways, and the frequent need for outside professional services add to the pain and expense.

In Reg storage desk's view, it's a solid piece of incremental data centre acceptability progress from Pure that will hopefully accelerate the use of VVOL technology.

Korean chipper SK Hynix reported sparkling fourth quarter and full year 2017 results on the back of great pricing – from its point of view, naturally – for DRAM and NAND chips.

SK Hynix says it will pave the way for its full-fledged entrance to the enterprise SSD market by increasing the proportion of 72-layer 3D NAND it makes. Currently 3D NAND is about half of its total NAND output. Other suppliers, such as Micron, Toshiba/WDC and Samsung, use 64-layer 3D NAND

Data is moved to and from ITV's archive automatically via BlackPearl using a variety of integrated partner applications and a Customer Created Client (CCC) that ITV built through Spectra’s BlackPearl Developer Programme.

StorMagic has announced the availability of new low-cost, hyperconverged appliances: StorMagic Dell EMC HCI 640 (2-node, 2U, 2TB) and HCI 740 (2-node, 4U, 6TB.) They use StorMagic's SvSAN hyper-converged software with Hyper-V or vSphere hypervisors installed on the Dell servers.

The boxes - Dell R640 and R740XD servers - come fully configured through Dell's OEM group and are distributed through Exertis.

John Glendenning, StorMagic SVP of sales and business development, said: "“HCI vendors have a reputation of primarily targeting enterprise data centres and large remote sites, which is apparent in the cost and complexity of these solutions.”

We'd guess he is talking about Dell's VxRail HCI appliances and its OEMed XC ones.

StorMagic "is erasing that perception with appliances designed specifically for small data centres and edge computing with pre-configured, two-server clusters that bring HCI to a price point and level of simplicity that has just not been available until now."

Initially, the HCI appliances are only available in the UK through the StorMagic partner network. The starting price for a two-node 640 appliance is £15,500 MSRP with the two node 740 appliance retailing for £24,500 MSRP. Upgrade options are available.

It wouldn't be a proper storage week without news from Veeam. So here we learn that Veeam, now describing itself as the Availability for the Always-On Enterprise innovator, says its Veeam Recovery to Microsoft Azure with Veeam PN (Powered Network) is now available.

On-premises workloads can be recovered to Azure by using it.

Veeam PN is free software that is a light-weight software-defined VPN-type thing and said to eliminate complicated VPN installation and simplify network configuration.

We're told IT can automatically spin up an Azure cloud instance, and securely connect the business to customers, partners, and employees regardless of their location, without the cost of a redundant standby system.

It is claimed to be complete and turnkey and delivers cloud restore for Veeam backups. The Veeam PN does away with the need to set up a VPN to create a recovery site in Microsoft Azure.

In-memory technology supplier GridGain said its 2017 sales surged 84 per cent compared to 2016, with a mix of new and repeat orders from companies in financial services, fintech, online travel services, telecommunications, web-scale online business services, and healthcare. Headcount increased 73 per cent during 2017, as it expanded its presence in Western Europe, North America and the CIS region, with additions in sales, professional services, development and customer support.