Bijou robo-courier powered by electricity and $92m in VC cash 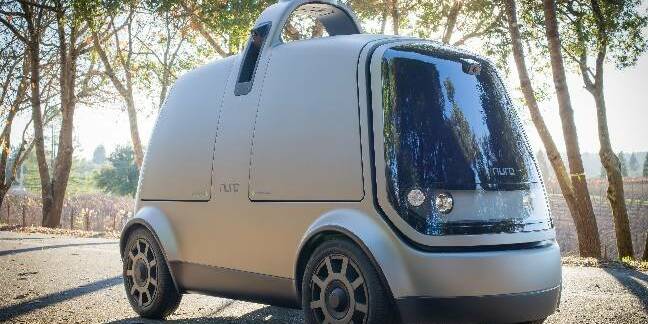 The R-1, as it has been named, is an electric driverless van approximately as long as a normal car, but half as wide, and has modular interior compartments for all your carrying needs. The company's website has videos of their prototype whizzing around empty car parks, which is making the press and onlookers cry "ooh!", "aah!" and "it's just like that pizza van in Black Mirror!"

Nuro's two founders are Jiajun Zhu and Dave Ferguson, who previously worked on software for Google's Waymo self-driving project, (Zhu being one of the original members of the team) before moving on to found their own company. Their work, which they've kept quiet until now, grabbed the attention of backers Banyan Capital and Greylock Partners, which provided the $92m.

Its R-1 vehicle is designed to make local deliveries using its modular interior to transport whatever users and businesses need. Speaking to Bloomberg, Ferguson said how the Nuro team think of their new project as "a local teleportation service".

In a statement announcing the R-1, Ferguson said: "We started Nuro to make products that will have a massive impact on the things we do every day. The result is a self-driving vehicle designed to run your errands for you. It is poised to change the way that businesses interact with their local customers."

Zhu added: "We aspire to lead a new wave of robotics applications that make life easier for everyone and give us more time to do things we love. We are living in extraordinary times where advancements in robotics, AI and computer vision are making it possible to imagine products and services that could not have existed just 10 years ago.”

Meanwhile, Waymo has been testing its cars in Arizona and battling an ugly lawsuit against Uber for allegedly stealing their tech, with the man at the centre of it said to harbour some interesting... er... interests. ®

Uber CEO compares pedestrian death to murder of Saudi journalist, saying all should be forgiven

Uber, Lyft rides among the biggest reasons why you're probably sitting in traffic right now – study

Lyft, Uber drivers boost app surge prices by turning off, tuning out – and cashing in