F-35 flight tests are being delayed by onboard software snafus 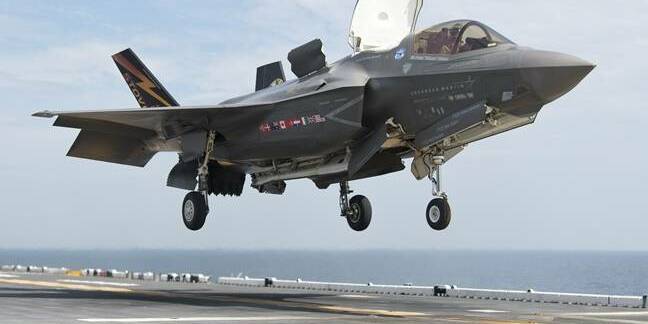 F-35 fighter jets are running so many different versions of their core software that a US government watchdog has warned of knock-on delays to flight tests.

Core software aboard the Mach 1.6 stealth jet is in such a state of disarray – with aircraft at different US military bases running different versions of it – that the US Department of Operational Test and Evaluation (DOTE) said planned future releases were being stripped of new features so developers could address the thousands of bug reports filed by pilots and engineers.

The software, identified by its Block number, has so far been through tens of iterations, with Block 3F – the latest version – having been through more than 30 versions by autumn last year.

“As of late October 2017, the program was preparing a second version of Block 3FR6.3 (3FR6.32), the 31st version of Block 3F, software as it continues work to resolve key remaining deficiencies,” said DOTE in its annual report, which was published late last week. “The [F-35] program is using test point data from older versions of software to sign off capability specifications and justify baseline test point deletions, even though the old data may no longer be representative of the latest version of Block 3F software.”

The DOTE report continued: “The ‘final’ Block 3FR6.3 software for SDD was released in October 2017, but this planned final version has already been superseded by two additional software updates; more software patches will likely be needed as the program continues to work ongoing problems with weapons and avionics.”

Britain’s 14 F-35Bs are all thought to be running Block 3F software of various sub-versions. Yet the all-singing, all-dancing jet still can’t talk to its guided air-to-ground bombs properly, even with the latest patches installed.

Even more worryingly, trials identified that the AIM-120 AMRAAM missile, which the Royal Air Force and Royal Navy intend to use as the F-35B’s main air-to-air weapon, cannot currently be used to its full potential by the supersonic stealth jet. After six test firings in simulated combat scenarios, test pilots identified “key technical deficiencies in the ability of the F-35 to employ the AIM-120 weapons”.

The precise nature of those deficiencies was classified. Britain first bought the AMRAAM for the 1980s vintage Harrier jump-jet. It is currently carried by the Eurofighter Typhoon.

Even the jet’s inability to communicate with its unique “portable memory devices” (which are not USB sticks) at a reasonable speed caused problems, with DOTE reporting: “Pilots frequently chose to manually enter mission planning data in the cockpit, versus using the Offboard Mission Support workstation, due to the excessive time required to transfer the data from the Portable Memory Device to the aircraft.” Despite efforts to speed this up with “updated transfer devices,” said DOTE, “Portable Memory Device loading still takes too long and is often problematic.”

The PMDs are made by Smiths Aerospace, a British subsidiary of General Electric’s Aviation division. Flight Global reported in 2014 that the data transfer took about quarter of an hour, at the time.

Meanwhile, crucial mission data loads (MDLs), software packages necessary for the F-35 to operate its sensors and weapons, have been subject to an “extended timeline … due to ongoing delays with Block 3F and the program’s failure to provide the necessary equipment and adequate software tools for the U.S. Reprogramming Laboratory (USRL),” said DOTE.

The USRL is the American government body charged with writing all the MDLs.

On the bright side, the Autonomous Logistics Information System (ALIS) bundled with the F-35 is now running on Internet Explorer 11, after techies “completed development of ALIS 2.0.2.5 in late CY17 to address some of the existing deficiencies and usability problems.”

As we previously reported, ALIS tracks every single component on the aircraft and appears to be the ultimate vendor lock-in software package. Even this good news, however, came with a sting in the tail from DOTE: “ALIS version 3.0 is necessary to provide full combat capability... The program deferred to ALIS 4.0 capabilities previously designated for ALIS 3.0. ALIS 4.0 is scheduled for release in late 2018, but this schedule is high risk.”

DOTE also noted that product testing of ALIS relied too heavily on lab simulations, and when “fleet personnel” got their hands on it, they “used ALIS in ways that laboratory testers did not”.

Problems with F-35 testing are not only confined to software, however. An F-35B (the same model as the UK is buying for its Queen Elizabeth-class aircraft carriers) used for ground testing “is unable to start third-life structural testing due to the extensive repairs that were required to complete the second-life testing,” halting ground tests completely.

In addition, another F-35B used for flight tests had to have “unique horizontal tail thermal barrier coatings” applied so it could be flown in full afterburner for long enough to “collect necessary strain load data”, while other F-35Bs in flight sciences testing developed cracks which “delayed testing”. The F-35B is designed for a service life of 8,000 hours, but with ground testing halted, DOTE warned that “the effect of the discoveries and failures during testing on the service life certification... may [result in it being] less than the planned 8,000 hours designed for all variants, even with extensive modifications to strengthen the aircraft.”

Under its Block 3F software, the F-35 is designed to reach a speed of 630kts and pull a maximum of 7G.

The F-35’s core software is written in C++ and runs on commercial off-the-shelf PowerPC architecture processors. The operating system is Green Hill Software’s Integrity DO-178B real-time OS, as used in a number of (mostly American) aircraft, both civil and military. The F-35’s processors are bundled into an “electronic brain” called the Integrated Core Processor (ICP), according to an article from Avionics magazine, which said: “Packaged in two racks, with 23 and eight slots, respectively, this computer consolidates functions previously managed by separate mission and weapons computers, and dedicated signal processors.”

Each ICP is said to comprise:

Firewire ports are used to “link the ICP, display management computer and the CNI system to the vehicle management system.”

The woes of a large government software project will be familiar to many Register readers. However, the extended timescale of the F-35 project – it has been flying since the beginning of this decade – raises questions as to whether the UK is spending its money wisely on this project. Each of Britain’s future F-35Bs will cost us around £90m at current prices – and that price excludes spares, software updates, and so on.

So far Britain has committed to buying 48 F-35Bs, of which we currently have 14 on charge. In total the UK plans to buy 138 jets, and a fag-packet sum tells us that is a planned spend of £12bn. If you lump in the support costs, that will probably treble the spend over the aircraft’s lifetime.

The DOTE report tells us that software problems are piling up, delaying flight testing. As the Royal Navy has publicly declared that the F-35 will “achieve initial operational capability” this year, which El Reg thinks will mean December. IOC means, in plain English, “if a war broke out tomorrow we could send this into combat but it can’t yet do everything we want”.

If any further delays of the type that DOTE identified last year occur again this year, we could see delays to Britain’s plans of having a ready-to-fight squadron of jets. And that would mean money being spent on the F-35 would, in part, be money wasted. ®