MY GOD, IT'S FULL OF CARS: SpaceX parks a Tesla in orbit (just don't mention the barge)

After a morning of delays due to high winds, the mighty rocket lifted off from the Kennedy Space Center Launch Complex 39, in Florida, USA, at 1245pm PT (2045 UTC) with no problems. Its 27 Merlin engines, bunched into three reusable rockets, throttled up, and lifted the unconventional payload to the heavens.

Two minutes and thirty seconds into the flight, two of these booster rockets peeled off, leaving just a central stage hurtling into the obsidian void with a Tesla strapped to it. The pair of side rockets landed vertically in tandem at the space center on Earth eight minutes after launch. 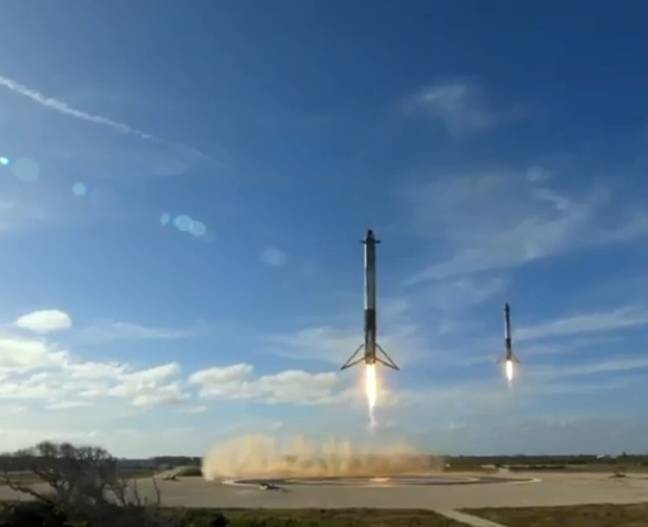 No, this is real, not science fiction ... Falcon rockets land back on Earth after launch

Shortly afterwards, the remaining central stage separated from its payload, and began the long trip back to Earth while its cargo continued on. This central rocket was due to land on the autonomous barge, Of Course I Still Love You, floating in the Atlantic ocean, but it didn't make it back in one piece.

Two out of three of the rocket's engines failed to reignite after running out of ignitor fuel during the descent. It smashed into the sea, damaging two thrusters on the barge it was supposed to land on, and showered the platform with shrapnel. SpaceX staff spoke of losing "the central core" as a live video feed from the barge cut out just seconds before the rocket was due to set down.

Here's the full video stream of the thing lifting off and coming back down in parts:

As this was a test flight, no one was going to risk lashing an actual satellite to the craft, so the payload was Musk's personal Tesla Roadster, painted a custom cherry red color. In the front seat was a dummy wearing a SpaceX-designed spacesuit – at least that's what we're told. Some have speculated this is a foolproof way to dump a dead body. No further comment.

The car is completely exposed to the universe, and has a camera attached beaming back video to Earth. Musk, who oversees Tesla as well as SpaceX, tweeted video footage of his flash motor in space:

View from SpaceX Launch Control. Apparently, there is a car in orbit around Earth. pic.twitter.com/QljN2VnL1O

You can also catch a live video stream from the cosmic ride here:

In the Roadster was a mini version of the same car, also with a mini-dummy installed, for extra public relations goodness. In the glove box was a crystal with inscribed with words from a favorite book series of Musk's, Isaac Asimov's Foundation. The Roadster was also playing David Bowie's Space Oddity, not that anyone could hear it, and the dashboard touchscreen displayed a quote from Douglas Adams. Nooice. 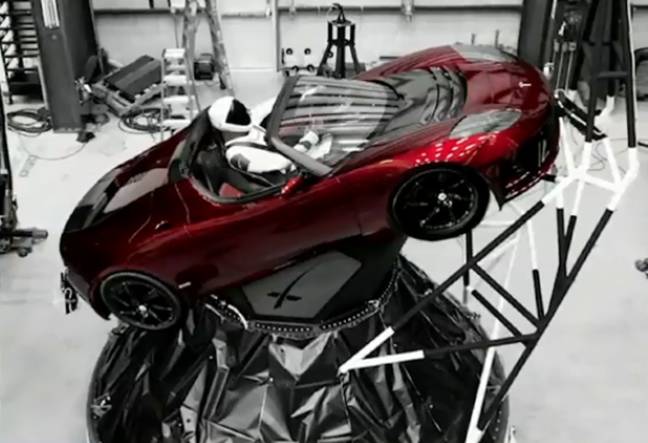 Has anyone seen the head of ULA recently? Musk's Roadster before it was launched into orbit

The entire payload is heading towards Mars, where SpaceX supremo Musk hopes to set up an outpost of humanity. The car is circling Earth and will be pushed into an extremely large elliptical orbit of the Sun, swinging it through the Solar System for a Mars flyby – and hopefully it won't crash into our probes around the Red Planet.

Specifically, after spending five hours in orbit of Earth, a booster attached to the Roadster will begin a final burn that will carry the package Marswards. Any aliens who encounter it along the way will no doubt conclude that humans are crazy. 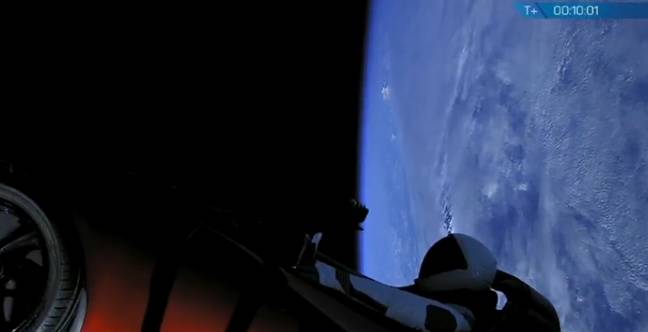 'Er, this is the GCU Arbitrary - you're not going to believe what they've done this time...'

So, in short, what SpaceX has created here is a heavy lifter capable of expanding the International Space Station or building the next orbiting science lab, since the ISS is due for retirement and will de-orbit in little under a decade.

Wow that #SpaceX launch, huh? Amazing what you can do with technology when smart folks aren't screwing around making Instagram filters etc

But that's all in the future. For the moment Elon's Musketeers have set a new bar for modern reusable orbital delivery in terms of the amount of heft available and the cost per kilogram. These vertically landing rockets are designed to be refurbished and launched again, saving money versus losing the whole rocket every time.

Even though one of the rockets didn’t make it safely back to Earth, the cost of orbital delivery has been slashed by economies of scale and reuse. ®

Promises restoration of suspended accounts, despite previous pledge to do no such thing
Security25 Nov 2022 | 449