X.509 metadata can carry information through the firewall

Fidelis Cybersecurity's Jason Reaves has disclosed a covert channel that uses fields in X.509 extensions to sneak data out of corporate networks.

The reason this matters, Reaves explained in a presentation at the Bsides conference in July 2017, is that if a company's systems were hijacked by hackers, the miscreants could exfiltrate sensitive internal documents over the X.509 path without being noticed.

TLS uses X.509 for certificate exchange, during the handshake process that sets up an encrypted communication.

The particular field Reaves' proof-of-concept code abused is called SubjectKeyIdentifier, and while “most libraries” try to cap the packet size during the handshake, “the extension in the certificate itself can be created to a length that appears to only be limited by memory.”

It would be hard to spot, Reaves said in his Bsides presentation: “How do you detect this? You have to parse out all the data inside X.509, and there's a lot."

In the proof-of-concept code (here), Fidelis transferred a copy of Mimikatz in the TLS negotiation, simulating an attacker pushing Benjamin Delpy's attack tool into a compromised network. Here's what that looks like: 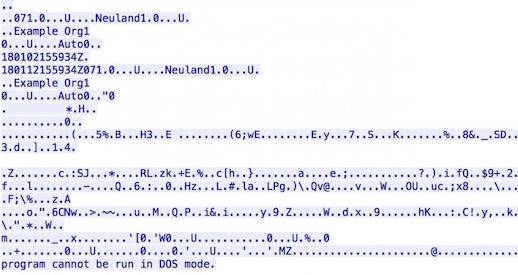 Reaves wrote that the proof-of-concept code used self-signed certificates, and blocking those may be a useful way to defeat any such attack. A video of his presentation is below. ®