New strife for Strava: Location privacy feature can be made transparent

Circles within circles make it easy to find the midpoint 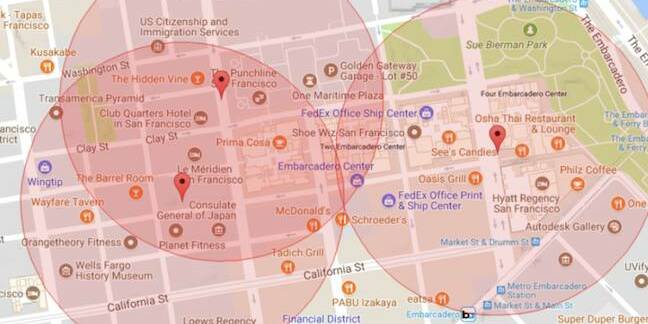 Hidden in plain sight: Wandera thinks it can use entries and exits from privacy zones to deduce Strava users' start points

Wandera's analysis comes after Strava released a "heat map" that was found to offer clues to the location of military bases. Such data was only captured because Strava's privacy feature is off by default. When it's on, the feature creates a virtual bubble in which users' activities aren't tracked.

But as Wandera's Liarna La Porta wrote, the privacy zone might not be enough: “If an activity on Strava is circular in nature and the return route is from the opposite direction, it is relatively easy to deduce the mid-point and where the privacy zone is centred on. If there are not two exact opposite points, it’s possible to use a third point from a different activity and solve the equation of a circle passing through 3 points.”

As the company's Dan Cuddeford added: “Assuming Strava’s user base is made up of serious cyclists who invest heavily in the best equipment, the app can be used by criminals as an accurate map of where to find expensive bikes they might want to steal.”

Wandera said it notified Strava about the issue. Strava reportedly responded by saying the feature is working as intended. However, La Porta added, it would probably be better if the Privacy Zone was randomised rather than set to a specific radius.

Another simple fix is to centre Strava's privacy zone on something other than your home, office or wherever you start to run or ride. By placing it a couple of hundred meters away, you'll make home-hacking harder. (One Reg operative hit on this idea a while ago, not to preserve privacy but to make sure his efforts on a tasty hill were included in Strava's records.)

This kind of mis-direction probably won't help military bases, which have large populations of people. But it's got to be better than the Pentagon's rushed and embarrassed response to the heat map fiasco. ®

Congratulations, America, the home of Clippy (and Azure) is now running the US military's IT

Videos Rock and roll at 30,000 ft at hypersonic speeds