Yes, I need an 8K livestream in every room 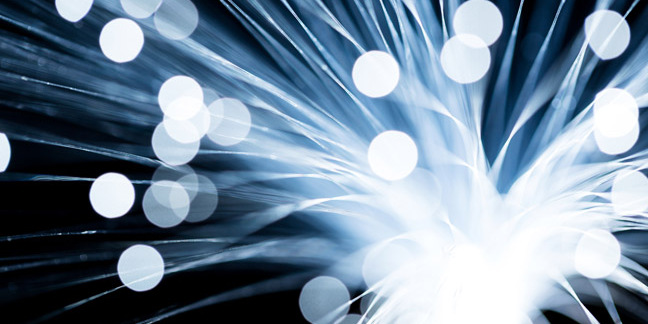 The biz, which is aiming to deploy its full-fibre network in 30 cities across the UK, was able to stream four high-definition 4K videos simultaneously, plus one in 8K, to a single access point. The technology can, theoretically, shift a standard 5GB HD movie file in four seconds, or a 25GB Xbox game in 20 seconds.

In the real world, though, you mileage may vary: the ISP may be able to pipe up to 10Gbps to your door, but once the data gets into your home network, it'll slow down due to various bottlenecks. For instance, your computer or console can't write to its disk or solid-state storage at 10Gbps, your Wi-Fi can't handle that sort of speed, and your Ethernet probably isn't 10GE.

Hyperoptic chief exec Dana Tobak admitted it was difficult to see a use for residential purposes, although she told The Register it was "more than a clever PR stunt." She said that, from a residential perspective, home PCs and similar devices don't have the hardware specs to make full use of the high-speed data rates.

"In a residential environment you would currently be hard pressed to use all of 1Gbps, never mind 10Gbps," she said. "I think in the near term where there is a case for 10Gbps is businesses, which have servers, serving tens-of-hundreds of people."

She said Hyperoptic hoped to offer the speeds to businesses by the end of the year, but said the scope of its service would depend on demand.

For the trial it used a single thread of single mode fibre with a bidirectional 10G SFP+ transceiver. The layer 2 technology was 10G Ethernet instead of passive optical network (PON).

Dario Talmesio, principal analyst at Ovum, said it was difficult to see any practical use for 10Gbps speeds at the moment. "As a marketing exercise it is clever, as it puts their name out there." But he said it is also indicative of an appetite for faster speeds.

"The reality is that only 3 per cent of the UK market can get real fibre." He added that the increased resilience that comes with full-fibre is arguably more important than speed.

A number of operators have begun making noises about bringing full-fibre speeds of up to 1Gbps to consumers. Last week TalkTalk promised to roll out fibre to 3 million premises in the UK.

However, William Webb, former director of the regulator Ofcom and current CEO of the Weightless Special Interest Group, questioned whether most people would need to access those speeds.

"At present, it's hard to see a strong need for a data rate per person in the home beyond around 15Mbps. At this data rate it's possible to stream 4K video, web browsing is not constrained by the access speed and most file downloads are completed pretty fast. That might mean in a household of four people that up to 60Mbps would be valuable."

He said it was possible to imagine scenarios that might need higher such as some versions of VR.

"All this suggests that focussing on delivering circa 50Mbps to every home is more important that Gbps speeds to some." ®