Starting tomorrow, Google, which makes most of its money from online advertising, will begin blocking egregious ads in its Chrome browser under limited circumstances – though it would really rather not.

The reason, explained Chrome veep Rahul Roy-Chowdhury in a blog post on Tuesday, is that some ads suck.

"It’s clear that annoying ads degrade what we all love about the web," he said.

Millions of internet users reached that conclusion years ago and have taken steps to block web ads, often as many as possible rather than the worst of the lot, through the use of ad blocking code in browsers, in apps, and in network hardware.

While the Internet Advertising Bureau maintains that "ad blocking is wrong" and offers tone-deaf advice like urging a data diet to improve page load speed rather than advocating for abstinence from privacy-invasion altogether, Google has grasped the depth and breadth of the resentment created by the ad industry's unrepentant bad behavior.

The Chocolate Factory aims to mitigate some of the industry's excesses. It's not, however, engaging in broad, indiscriminate ad blocking – which is good news because websites including El Reg rely on all you lovely people viewing well-behaved adverts. In our case, it funds our journalism.

The fewer bad ads in general circulation on the internet, as a result of Chrome's crackdown, the higher the chance people will whitelist sites in their ad-blockers, or disable the plugins, which would be a relief for publishers that rely on web ad sales.

Google dipped its toe in these waters before, starting with the introduction of its Ad Preferences Manager (now called Ad Settings in Google Accounts) in 2009. And in 2012, the ad biz introduced a Mute This Ad button, which the company described as "an early step in the right direction of giving users control over ads."

It could also have been called a belated step to replicate the mute button already available on many keyboards.

Now the search giant is wading a bit deeper, but just a bit. On Thursday, Chrome will be ready to block ads that fall short of the guidelines established by The Coalition for Better Ads, an advertising and publishing industry group. (And, yes, our ads adhere to these guidelines, so Chrome won't be eating our revenue.)

The organization's Better Ads Standards are based on a survey of some 40,000 internet users from North America and Europe. The survey identified these most disliked ad formats:

In a blog post to be published today – provided to The Register in advance – Google engineering manager Chris Bentzel explained that Google evaluates websites by sampling pages for Better Ads Standards violations, grading them with a Passing, Warning, or Failing rating. 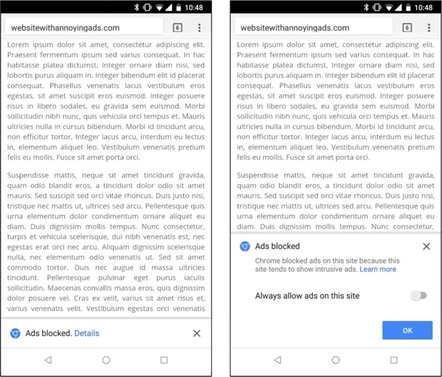 An example of Chrome blocking a misbehaving ad ... Click to enlarge

From July, Chrome will name and shame insecure HTTP websites

Google is making that rating accessible via its Ad Experience Export API and to site owners through the Ad Experience Report in the Google Search Console. The Silicon Valley giant is also providing a way for site owners to request a re-review of ads, for those who believe they're not breaking the rules.

Failing sites viewed through Chrome are at risk of having Google block their ads. After 30 days of non-compliance with ad standards, Chrome will check the network requests – e.g. JavaScript or image calls – on sites with pages that fall short of requirements against known ad-related URL patterns. And if there's a match, the ad will be blocked at a network level and will not display.

"This set of patterns is based on the public EasyList filter rules, and includes patterns matching many ad providers including Google’s own ad platforms, AdSense and DoubleClick," said Bentzel.

According to Bentzel, if a network request has been blocked, Chrome will alert the user and provide an option to allow ads on the site, with differing notifications for desktop and mobile users. Site owners meanwhile can reform their ads and be free from Google's meddling.

Google's goal, says Bentzel, "is not to filter any ads at all but to improve the experience for all web users." By highlighting crap online adverts, website owners will be encouraged to up their game, in other words. And ad networks competing against Google that sling crappy internet advertising around will gradually feel the wrath of Chrome. ®