Real world test Last year Apple transformed the fortunes of its iPad. In the spring the iconic fondleslab looked so neglected, it was declared "done". Sales were half of what they had been at the iPad's peak.

Then in June, the biggest software update in years, iOS 11, transformed the iPad from a glorified picture frame into something resembling a modern computer. It was as if a brand new computing platform had fallen out of the sky.

Multitasking, drag and drop and file management had all been addressed. Add this to much improved hardware specs in the new Pro line, and the promise was: you could use this for most of your work – perhaps all of your work.

But how much work?

Over recent years I've tried to evaluate every promising new professional mobile platform. There was Android on x86, or Jide (RIP), which had rough edges, but was a nice surprise. There was Microsoft's Continuum (RIP), around which HP had invested so much. There was – and there still is, as the other two are either dead or dormant – Samsung's DeX.

The latter two attempted to use the enormous and largely untapped computing power in a phone to do more – with native apps adapting to a third-party display and keyboard. I'll be doing the same with Planet Computing's Gemini, which has just entered production.

Each time I've tried to do a day's work with the device, and no cheating. Here's what I found with the iPad.

For size and convenience, the iPad Pro 10.5-inch has a lot going for it. It's smaller and more convenient than any PC Ultrabook or Microsoft's classy but much more expensive Surface Pro. The tablet itself is barely larger than the classic "9.7-inch" iPad, as the display bezels have been reduced. (The classic line continues at around half the price – but with corners cut – like oleophobic coating.)

Apple's wraparound Smart Keyboard sets the bar impossibly high. It is not much thicker than the regular Apple cover, so you'd expect compromises in keyboard quality. But the key feedback, for something so thin, is quite superb, with a nice springy feel – I didn't get tired typing on it. And since it uses the proprietary iPad Pro port, rather than Bluetooth, you don't have to worry about charging it, or waiting for it to connect.

It does require dexterity unfolding and folding it correctly. I managed this successfully perhaps half of the time. Give yourself a minute familiarising yourself with the folds.

Unlike a Surface keyboard cover, you can't pick the device up with the keyboard – unless you want to risk an expensive breakage.

The Smart Keyboard's drawback is there's only one angle for the display, once the keyboard is set up. Given the small surface area that excluded resting it on your lap, bring a tea tray (or a chopping board will do). This much is true of the Surface too, but not necessarily third-party keyboards which have adjustable angles. 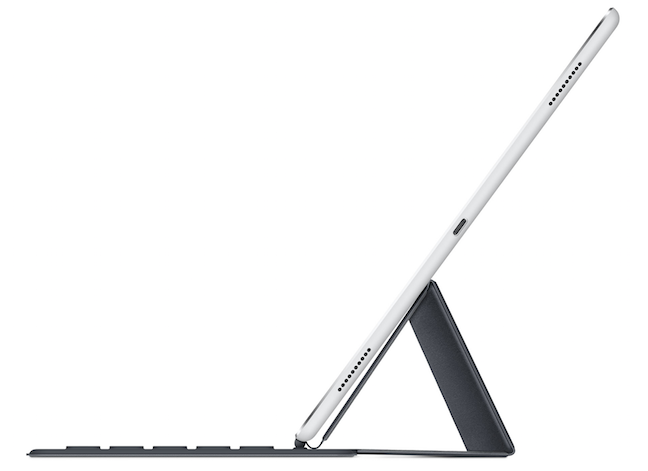 Any angle you want. Just kidding.

The machine was super speedy – as it jolly well should be for an entry-level price of £619. Inside the Pro is a four-core A10X, 30 per cent faster than the A9X which launched the Pro line, and more than sufficient to blast away a desktop chip in benchmarks.

The 2224 x 1668 display was overkill for office productivity-type work. To be honest, 1024 x 768 – the iPad's original resolution at launch – would have sufficed for browsing, email, writing, and IM. But it meant apps did look crisp in split-screen mode. Text was readable when the "narrower" app was used to show a web page.

If there's one disappointment, it's that the hardware sucks surprisingly more than I expected. I had 35 per cent battery left after a full working day. So it's certainly an "all-day machine" – it's just not as a power efficient as you'd expect an iPad to be – and I didn't expect to "keep an eye on the battery gauge" by mid-afternoon. Being Apple, of course, there's no option to reduce the refresh rate (it's a dazzling 120hz) or lower the screen res.

What's the gesture for clunk?

When I reviewed iOS 11 for iPad back in September, I found the new multitasking gestures weirdly counterintuitive. That hadn't changed. It's weird, because conceptually there's only two important things to remember: apps can be floating panes, or they can share the screen with another app. How hard is that to implement in gestures, you might think.

Invoking them is a bit more fiddly, though. I wanted either Slack or Twitter to share the smaller portion of the display. To do this you pull the app from new Dock and hold it. Of course it has to get in the Dock – an odd first step. And plenty of times it just refused to play ball.

On the plus side, the new context-aware drag-and-drop support is extremely well implemented. You can split the screen between Photos and Files, and file them as you go. You can pull at a tweet in Twitter and send it off to another app. It just needs more apps to support it.

Keyboard shortcuts are pretty important, and they're coming along. "Alt-tabbing" (via Command-Tab) is plenty speedy. Command-H takes you to the home screen. Hit Command twice in any app and you'll find the apps shortcuts:

For two decades Office has been the litmus test of whether a machine can cut it. Microsoft takes great pride in the quality of its Android and iOS Office ports, and what a good citizen it is being, and how lucky we all are to have it around. But I wonder if it's eating its own dog food.

You can insert footnotes (at the bottom of a page), but good luck editing endnotes (citations at the end of a document). Word doesn't give you the choice. This is surprising given that education and professionals are key markets. I guess they'll need to use pro tools then. I needed to format a column in Excel to two decimal places – it's well supported but hard to find (for the record, it's in a formatting button on the Home tab).

Both Word and Excel are superb at casual document creation, and the once-creaky integration with OneDrive has improved. But more demanding users than me will find themselves occasionally stumped.

Unless you're sketching, don't bother with a pencil. Yet.

One question civilians ask is whether Surface and iPad cut it for pen input. On Surface, Microsoft is very keen indeed for you to scribble in tablet mode. But despite a highly sophisticated pen, it's still early days on the iPad. The Pro is superb at sketching, but only began to support character recognition in iOS 11. Annotation apps are more mature as they use their own inking.

Files. But not Files. 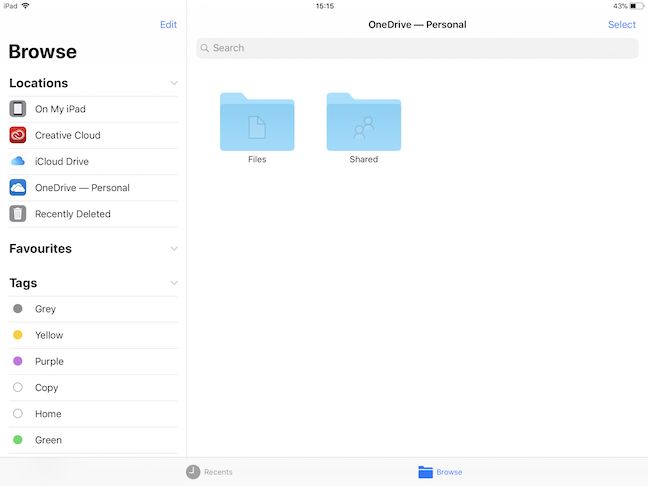 I was pretty generous with the Files app back in September, but how did it pan out for a full day's work? Maybe I was too generous. I'd describe the experience as "like using a proper File Manager but with chopsticks". It does half of the job that was missing, allowing you to place files in permanent storage, either locally or on a compliant cloud storage service. Of the latter, there are over a dozen, like OneDrive or Dropbox, with enterprise services like OpenText supported. But you hit a wall when you want to create a folder as you store the file. Apple has filled a yawning gap – but about half filled it.

You may experience a roadblock

I came across one roadblock. One of my stories required me to format and upload three pictures. But exporting to JPEG was something the iPad just didn't want to do. The built-in app, and popular apps like Adobe PS Express, have filters aplenty – but not basic resizing or resampling tools. Apparently (I now know) Google's Snapseed app could have done part of the job.

I also rely on multiyear mail archives as a database. This requires a decent content retrieval tool – something able to dig out an email for contact info ASAP. iOS Spotlight falls just short: it's fast, but overwhelmed by large data stores. And, of course, Apple's Mail will only index a month's mail by default.

I suspect that the "final 20 per cent" – such as dealing with an obscure compression format – is where the iPad Pro will really hit a wall for work. 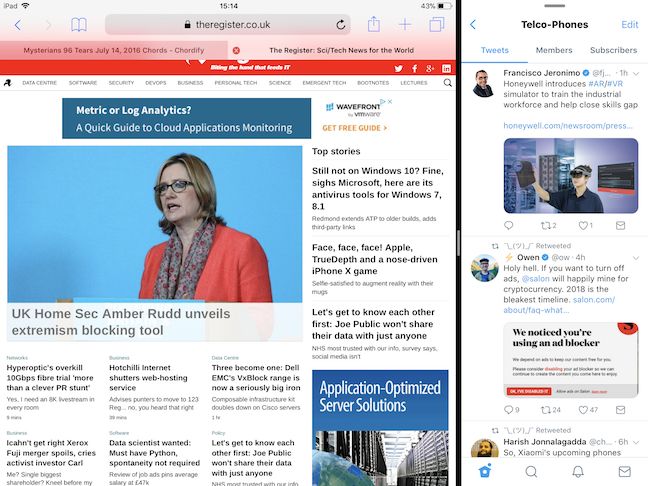 Overall, despite much carping over details here, I found the iPad surprisingly usable and likeable. After almost a decade, it's still early days. Remember that despite the version numbering, we're at the version 1.0 stage of the iPad Pro as a professional mobile platform. In the long term, I'd bet on Google, either via Chrome OS (running Android) or enhancements to mobile Android taking the lion's share of the mobile professional market.

But I can only see iOS improving. For a 1.0 offering – which is really what it is – it's impressive, and if Apple can work on greater integration, and cajole developers into supporting the new features, the seams will disappear. I suspect that even with Apple's luxury pricing, a lot of enterprises will look at this new maturing platform and given its mobility and manageability, wonder if it's worth a punt. ®