Astroboffins calculate MuskMobile will only last millions of years, has decent chance of bonking Earth, Venus

Explaining why he used his Tesla roadster as the test mass on his Falcon Heavy launch, Elon Musk remarked that he liked the idea of it orbiting for a billion years.

If the car endures, a bunch of astroboffins from Canada and the Czech Republic reckon it's going to last just a mere few tens of millions of years.

Running the roadster's future through what are well-known orbital N-body simulations, what the group believes will happen is that repeated Earth passes “lead to a random walk that eventually causes close encounters” with other planets and the sun.

The authors of the paper (Canadian astrophysicists Hanno Rein and Daniel Tamayo and Czech David Vokrouhlicky) think there's even a chance the vehicle could make a return to Earth: 6.5 per cent in the next million years, to be precise, and a 2.5 per cent chance of a collision with Venus over the same period.

Much of the expected drift in the Tesla's orbit will come from repeated “close” (but not impact-danger-close) encounters with the Earth. That's because it started here, so “the two objects have crossing orbits and will repeatedly undergo close encounters”.

However, now the Tesla is just another near-Earth-orbital object, like many asteroids, it's subject to other forces as well.

There's the Yarkovsky effect, a tiny force exerted because of the car's rotation. Whichever side is facing the sun absorbs heat, and facing away, it emits that heat.

The effect is tiny, but over long timescales it has an observable impact on an object's orbit. Because the roadster has a relatively high ratio of surface area to mass, they write, “a reasonable estimate for the strength of the Yarakovsky effect is ~ 0.05 AU/Myr”. That's 0.05 Astronomical Units per million years – approximately 7.5 million km.

Over the next thousand years, the boffins expect the car's orbit to bring it close to Earth 48 times, but “the orbits diverge after an encounter in the year 2091”.

The accumulating probability of collisions is plotted below: 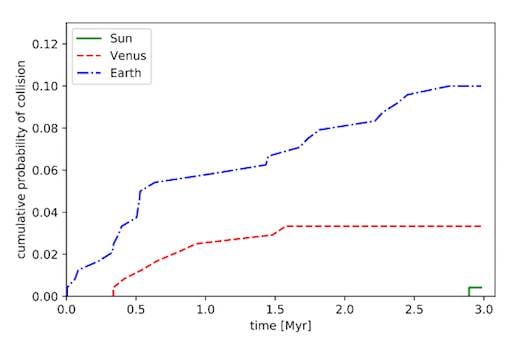 Image: Rein et al, "The random walk of cars and their collision probabilities with planets", arXiv

So there's a millennium of safety to look forward to, after which the car will start experiencing increasingly-frequent close encounters with Venus and perhaps eventually Mars. The models suggest that after nearly three million years, there's even a tiny chance it'll dive into the Sun. ®