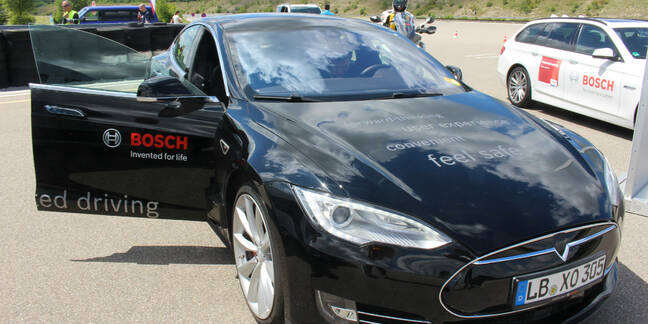 A Tesla driverless car incorporating Bosch data-slurping technology. The German company is starting an expansion of its mobility services

BCW18 Take risks, be first, launch something as the minimum viable product when it's 80 per cent ready – such is the philosophy of the head of Bosch's new Connected Mobility Services division, Bernd Heinrichs.

Bosch announced the newly created division at its Connected World conference in Berlin. As its first head, Heinrichs occupies the post of exec veep and chief digital officer, he told us.

The company, one of Germany's major business players and a supplier of everything from white goods to car parts, is betting big on autonomous vehicles, the software to run them and the services that can be sold on top.

"I think to build a separate entity – no, that's wrong, it sounds like a silo – but building this entity helps us to operate it in a more agile way than some of the more traditional entities of Bosch," Heinrichs told The Register at the conference. "And also to learn that developing the service, like in mobility, has different metrics to fulfil before it's launched, than a brake [pad] that we're launching into the market. We need to take risks, we need to move fast, we need to launch something as MVP when it's 80 per cent ready."

Former Cisco man Heinrichs joined Bosch four months ago and brings his IT industry expertise to the otherwise cautious German industrial giant. The culture shock of tech-meets-automotive is intriguing for both sides, he said. "I came to Bosch and said, 'Wow, you have maybe 10 per cent of the sales people which an IT company of the same size needs!' That is because you're selling to 80 customers. When you want to sell to, say, 200,000 customers... we need to make it indirect, leverage partners."

Selling to consumers is not something Bosch's vehicle division has done much of. Its first large-scale effort on this front is its Coup electric scooter business, which operates in Berlin, Paris, Madrid and other cities around Europe.

Heinrichs is bullish about his new unit's potential customer base. "You can sell it to the OEM... or offer it as a service to the OEM. If I look 10 years further ahead, I say 40 per cent [of sales] is services-based, mobility services. The predominant way is, there is a bit on the fleet side, [automated] parking and in similar areas." He even jokes – half seriously – about selling Bosch's connected services "to IT integrators".

Cloud features heavily in Bosch's mushrooming connected vehicles plan. It already has Internet of Things-focused cloud products in its hardware, and Heinrichs confirms that the company is working with "all major cloud providers" – namely, Microsoft, Amazon and Google.

"I don't believe in a single cloud strategy, or single public, or single private strategy," he said. "The key thing is that it is secure and scalable."

He is also an advocate of the "distributed cloud" as well as centralised data centres. "The cloud is not only a single-digit number of sites... The cloud for the automotive space should be a very distributed thing... it should go into the car, the street, the house. [Processing] should be done in real time, in a secure environment – it should be done where the data is generated."

Inherent in this is security, and Heinrichs is keen to assure The Register that "we are encrypting data but need end-to-end security" when we ask him what Bosch is doing to take it seriously, particularly in light of the EU's upcoming GDPR rules. "The afterthought security from other players is not enough."

"Security starts in the production of the product, it has to be an inherent part of the product," he continues, warming to the mustard of his theme. "It ends in communication security which is going from the thing, the component, to the cloud. Of course, I want to add Bosch can only fulfil that partially, we are working with partners on that side. Security, I don't think there will be one and only security company in the world that can do this."

Bosch is working with Cisco using its end-to-end security wares, as well as Amazon and Google.

With typical connected cars being capable of generating terabytes of data, Heinrichs also thinks that "data science [should become] a key discipline alongside other software engineers" within Bosch. "We need to understand that working with the data is not just building algorithms and doing software engineering. It's about data science, it's about understanding and structuring the data. That is a completely different business. Therefore I strongly believe that we as Bosch, the other OEMs, we need to implement data science as a separate discipline. Data science comes before algorithmic design."

Compared to the cautious approach of Bosch in its other business areas, Heinrich's Connected Mobility Services division is going to be a bit of a culture change for the stolid conglomerate. Whether or not it outpaces British R&D efforts in the same areas remains to be seen. ®

Bosch and Daimler jump in together on driverless vehicle tech

We suck? No, James Dyson. It is you who suck – Bosch and Siemens

Want a free Bosch steam iron? You'll have to TALK TO THE DEAD