Don't you worry your pretty little heads about it, says web giant 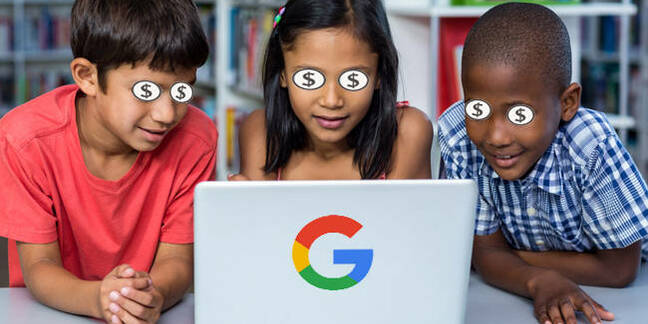 In a series of alternatively baffling, amusing and darn-right ridiculous letters, Google-parent Alphabet has told America's financial watchdog to effectively mind its own business when it comes to its income.

On Monday, the Securities and Exchange Commission (SEC) published six months' worth of correspondence between its staff and the online giant, in which the regulator repeatedly asked Google to explain why it didn't break out its revenue into logical buckets. The nerds at the Chocolate Factory told the anti-fraud officials it was probably too complicated for their little heads to figure out.

One of key questions was something people have been asking for some time: how much money does YouTube make?

And, amazingly, despite numerous back-and-forths in which Google execs told the SEC that they wouldn't understand – to which the SEC responded with questions that demonstrated that they understood entirely – somehow Google appears to have got away with it. For now.

The exchange – which started in July 2017 [PDF] – is predicated on a new rule introduced by the SEC that basically says investors in a public company should see the same top-level financial information that the CEO sees.

In this case, the Chocolate Factory said the CEO is Larry Page, who is chief executive officer of Alphabet. Alphabet was created as a new entity back in August 2015 and the company name up until that point – the ubiquitous Google – became a subsidiary of Alphabet.

There are lots of theories as to why executives embarked on the corporate reshuffle, ranging from branding issues to the ability of the company's cofounders to spend billions on silly nonsense without having to answer to suits and shareholders. Under the Alphabet umbrella, as well Google, sits Waymo, Nest, Verily, and others. YouTube, like Android, remains under Google – which means the vid website's financial figures are a tad buried within the Alphabet structure.

Thus, one distinct benefit from Google-Alphabet's perspective is that it makes rather tricky for anyone to figure out what the vast organization spends its money on, where its income comes from exactly, and – most interestingly – whether some businesses are profitable.

The SEC attempted [PDF] to look behind that carefully designed corporate curtain, and ran into a series of snotty geeks who told them to go away.

As CEO of Alphabet, according to Google-Alphabet, Larry Page doesn't really see YouTube's specific numbers because they are included as part of the overall Google results.

The corporate entity Google, overseen by CEO Sundar Pichai, includes a number of different business, including the real money-maker of search ads, as well as the video service YouTube. Pichai simply sends up Google's overall revenues to Page, Google-Alphabet claims, and those are the figures that the company supplies for public consumption.

Page, according to Google-Alphabet, doesn't see YouTube's expenses or its overall profitability, and so he doesn't make any decisions based on figures he doesn't see.

It's fair to say that the SEC didn't really buy this line, and so probed around asking pointed questions about what Page really gets to see. And it was repeatedly stonewalled.

"Google is largely a single online advertising business, with other smaller product areas within the Google ecosystem," it stated with a straight face.

Aside from this argument being, in your humble hack's opinion, industrial-grade horse shit, the issue does matter thanks to the sheer size of YouTube: it is the internet's second most popular website and makes billions of dollars in revenue. It is thought to be larger than Netflix.

But investors are not able to take a look at the business because Google subsumes it into its overall business. YouTube, it is thought, contributes roughly 10 per cent of Google's revenue but despite being a distinct separate entity, no one knows whether it is even profitable.

But it isn’t just YouTube, although YouTube is so huge that it is the most obvious target for the SEC to focus on to point out the ludicrous arrangement. There is also: Google Play, its bazaar for music, movies and apps; its cloud operation, Google Cloud; and its mobile phone stuff. They are all opaque in a way they arguably shouldn't be.

And Google decided to be a real prick about it, too. In response to SEC queries over Google Cloud revenue, as an example, it responded: "Revenue is recognized as the customer simultaneously receives and consumes the benefits of the services over time. Generally, this results in measuring progress towards the satisfaction of our performance obligations on an output method, based on units of service delivered or days elapsed in a contractual term."

At some point, however, the SEC decided to leave it be and fight another day. In its last letter, the regulator simply noted: "We have completed our review of your filing. We remind you that the company and its management are responsible for the accuracy and adequacy of their disclosures, notwithstanding any review, comments, action or absence of action by the staff."

Which is the SEC's way of saying: thanks for being a dick. Let's hope you don't screw up in future. ®