Analysis Spotify has ended five years of speculation about an IPO, and has filed for a public share offering likely to make its founders – and large record labels – extremely rich indeed.

But although that giant payday is built on the back of songwriters' "sweat and precog"*, Spotify still has trouble finding them to pay them. Even when they're as world famous as Ed Sheeran**.

The cash that Spotify has such difficulty handing over is the mechanical royalty. This is the payment that goes to a songwriter or composer when music is sold or streamed. Songwriters also get a separate performance royalty.

Traditionally mechanicals were handed over by the record company to the Harry Fox Agency, which then paid the writers.

For more than a year, music services have been exploiting a loophole in US copyright law. Instead of sending a cheque for mechanical royalties, they've been filing a statutory "notice of intention" to pay them instead. The NOI is a piece of paper which isn't redeemable for cash. (The curious can peruse the most recent NOI filings – and Spotify is not alone in filing them! – with the Licensing Division of the US Copyright Office here**).

Millions of NOIs have now been filed. How come? 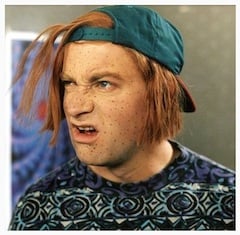 In this instance Sheeran – we're using him because he's famous – registered his details with performing rights society BMI. But Spotify isn't obliged to look at that BMI data. Instead, it only needs to have a quick rifle through the records kept by the US Copyright Office. These records are decrepit, and months out of date.

(You may wonder why any artist needs to register anything at all with the US Copyright office, a body which has few direct counterparts in the rest of the world, since copyright is automatic under the Berne Convention – no registration is required to receive protection. But that's a long story that need not concern us here.) 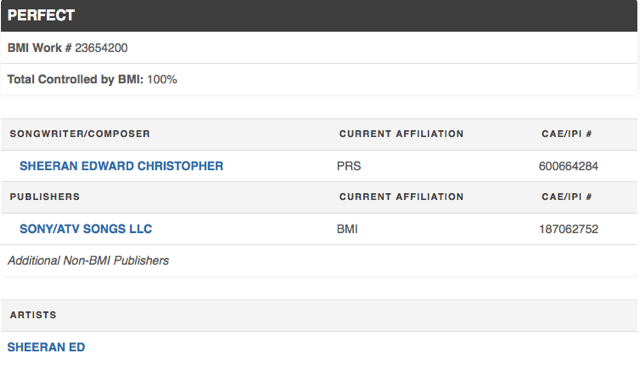 Fancy that: Ed Sheeran is quite easy to find after all. Snapshot of the BMI database

In the words of attorney Chris Castle [fascinating interview from 2010] it's another safe harbour for Big Tech. Just one caused by poor law and regulatory incompetence. Castle matched the Billboard Top 100 and found the music services had lodged NOIs for many of the most successful artists – Bruno Mars, for example, and Drake. "Not one of Google, Amazon, Spotify, or iHeart could find any of the copyright owners of any of the songs in the Top 5 for the last seven weeks," he found.

"Is it really correct for services to be able to burden the Copyright Office with these mass filings for songs that are already subject to a voluntary licence? Which gives them actual knowledge of the song copyright owner?" he asks.

"In almost every case," he told The Reg over email this week, "the song that Spotify says it can't find in the Copyright Office records is easily findable in the PRO databases, which are searchable for free and are almost always updated before the song is released. But Spotify is not required to look anywhere but the Copyright Office records based on a law from 1976 that was rarely used. In April 2016 [after a class-action suit was launched] the services suddenly started filing millions of NOIs and continue to do so."

As much as 25 per cent of the royalties owed to composers may be missing, we noted here, citing National Music Publishers' Association (NMPA) president David Israelite.

Spotify just can't wash those songwriters out of its hair

Castle has a policy point to add: the Music Modernisation Act doesn't address the mess by obliging the user to do a half-decent search. Well-meaning policy makers are barking up the wrong tree, one well-informed insider concurred, writing (anonymously) on The Reg earlier this week in a pithy overview of music licensing.

Collective licensing was once justifiable, our commenter notes, when the cost of figuring out who should get paid for what exceeded the pay available. "It's a relic of the analogue era. Nowadays it's possible, via metadata, to log exactly what got played to whom, when, and for rightsholders to be paid accurately."

"Follow the money," he/she typed ruefully. "It mostly ends up in Mountain View."

The Music Modernisation Act obliges the industry to create a global rights database, an enormously complex undertaking. However, several previous attempts to create one have ended in failure – and the people with the cash have all the data they need already to pay the writers.

"The moral of the story is that you can't find what you don't look for," Castle told us.

Feels great to have the cat out of the bag. Transparency breeds trust.

It is worth noting that, historically, the major labels did the accounting, and passed on the mechanicals to their signed artists. They couldn't afford to piss them off too much: artists had managers and publishers and were likely to remember non-payment when at contract renewal time. These days, of course, the artist-money broker relationship is very different. Artists aren't signed to Spotify or Google. The remaining three major labels are significant shareholders set to net hundreds of millions in revenue from the Spotify IPO – and we don't hear much of a noise from that corner.

Yesterday afternoon we invited Spotify to comment , but had not received a response at the time of press. ®