The Federal Communications Commission (FCC) has finally decided to address the months-long lack of telecoms service in Puerto Rico, one day before its chair visits the storm-ravaged island.

It has been over five months since the US territory was struck by Hurricane Maria and yet, according to the FCC's own figures, 4.3 per cent of the island remains without mobile phone service.

On Tuesday, the day before FCC chair Ajit Pai is due to visit the island, the federal regulator suddenly announced – or, more accurately, "proposed" - $750m in resources to restore and expand communications networks in Puerto Rico.

"The people of Puerto Rico and the US Virgin Islands are still recovering from last year's devastating storms. That means the FCC’s work is far from over," Pai was quoted as saying. "After my previous visit to Puerto Rico, I publicly committed to 'thinking creatively and doing proactively to help restore networks on the island.' The plan I’ve proposed today would deliver on that commitment and extend that vision even further."

Behind the words and self-congratulation however lies a shameful story of how the US federal regulator has failed miserably to assist Puerto Ricans and has even acted against their interests in the face of criticism.

Of the $750m for Puerto Rico and $204m for the US Virgin Islands, only $64m is actually on the table, set aside as "additional funding for short-term restoration efforts" and even that is an accounting fudge, created by "declining to offset that advanced funding against future universal service support payments."

The rest is designed to make Pai look good and win him some positive PR, and presumably distract attention from his office's failure to properly address the issue. Of the huge sum announced $631m is a proposal for "long-term funding" and the $259m in "medium-term funding" is also a proposal.

In other words, it is a nothing burger with a side order of nothing.

The Register has been tracking Puerto Rico's recovery efforts, using the FCC's own stats to chart what has been an extraordinarily slow recovery that has been hampered by the regulator's own actions.

Back in November, we looked into FCC Commissioner Jessica Rosenworcel's increasingly frustrated appeals for hearings to be held into the storm and the FCC's handling of a complete telecoms wipeout.

We statistically predicted that the island would not be back up to 100 percent coverage until December 18.

When we came back to the issue as that deadline passed, we were amazed to discover that the publication of our analysis had seemingly led to the FCC trying to evade responsibility by reducing its reporting requirements on the ground from every day to just three days out of seven.

That relaxation – and the failure to either set aside additional resources or hold hearings into how the FCC had handled the crisis – led to a notable slowdown in recovery efforts, which we documented in a graph.

The slowdown led to a renewed prediction of 100 per cent coverage to be extended past the holidays and on to January 10.

When we wrote another story pointing out that second reporting reduction and its role is slowing recovery, the FCC responded by changing the reporting requirements – this time in the right direction, moving from two to four reports a week – before abandoning them and going back to two per week once in mid-February once criticism has died down.

Our last prediction was that the island would be back up to full strength this week – something that may even have factored into the FCC's decision over when to send Pai to the island. But the subsequent relaxation of reporting requirements has again slowed recovering and our latest prediction is that Puerto Ricans will only get full coverage back on April 1, 2018 – April Fools Day. 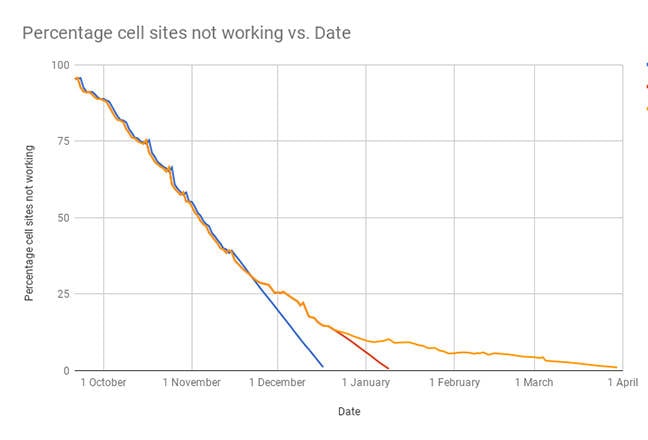 Recovery has slowed down several times: each time connected with lowered reporting requirements from the FCC.

That's not the only evidence of a shameful failure to act except when Pai's team feel the chairman himself will be personally impacted by criticism.

Having refused to listen for months to his fellow commissioner's calls for more work and hearings, the FCC suddenly announced on December 7 that it would seek public comment on its response to the storm.

That announcement only came about, however, after the FCC heard of the results of a report by the US government's General Accountability Office (GAO). Just two days later, the FCC was formally supplied with a draft of the report.

That GAO report was not made public until a month later and was notably critical of the FCC, in particular its failure to hold carriers accountable for repairing their own networks.

The publication of the report led to yet more public relations efforts by Pai. Having failed to address the issue for months, two days before the release he put out a statement about "helping hurricane-affected TV stations." Then after publication, Pai gave two speeches: one on "the critical role of 911 during major disasters" and another the next day on broadcasters' role in emergencies.

The public responses to the FCC's public comment period were just as critical as the GAO report. "Months after Hurricane Irma wrecked the US Virgin Islands and Hurricane Maria desolated Puerto Rico, the FCC has yet to undertake a comprehensive examination of why so many American citizens have been left without even basic communications for far too long," noted Shiva Stella, of the policy outfit Public Knowledge.

When that criticism started getting attention, the FCC then announced that Pai would visit the island from March 7–10 "to meet with local leaders and communications service providers and review the status of communications restoration efforts after the 2017 hurricane season."

That was back in February and the issue appears to have been completely ignored again until Pai's team suddenly realized the chair was due to visit the island this week, at which point today's nonsense news suddenly popped-up, appearing to set aside money for the island when in reality the FCC has continually failed – and continues to fail – to do anything substantive about the issue.

And so, for nearly six months, the federal regulator has failed to actively address the issue of Puerto Rico's telecoms problems except when the chair himself has come under criticism, and even then the actions has been little more than PR puff.

Today is no exception. ®