Ethernet sales growing, but routing's been routed by software

If you watch the fortunes of the big names in switching, you probably won't be surprised to hear that the market is only recording modest growth.

According to analyst clan IDC's wrap of calendar year 2017's shipments, the switch business added a mere 3.2 per cent year-on-year in Q4 2017 to reach US$6.9 billion for the quarter, while the full-year $25.7bn represented 5.4 per cent growth.

Routers, IDC says, grew four per cent in the year to reach $15.2bn.

The bright spot for vendors is in the 100 Gbps Ethernet segment, which is becoming the default in hyperscale data centres. 1.3 million 100G ports worth $661 million sold in the final quarter of 2017.

Growth in the 100G market, IDC says, is creating a knock-on effect in 25G/50G ports, with customers spending $124 million in Q4 to buy more than a million ports at those speeds, and this is denting the 40G segment with declines in ports (down 6.9 per cent year-on-year for Q4) and revenue (down 11.2 per cent for the year).

Campus connections are pushing growth at 1G and 10G speeds, but they're getting cheaper. Hence, while 1G port shipments grew 5.4 per cent year on year to 112.6mn in Q4, revenue was down 0.5 per cent for the whole of 2017.

The router market had very mixed results, with growth of four per cent for the year as service provider sales grew 5.7 per cent to offset a very weak enterprise segment that declined 1.1 per cent.

North America's router market is probably a harbinger of things to come, since the US is enthusiastically adopting software-based routing: revenue was down 7.9 per cent for the whole year, and down a stunning 20 per cent year-on-year in Q4. 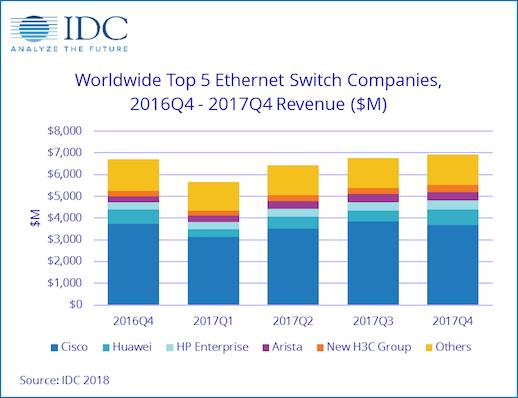 Cisco remains the behemoth of switching and routing, but HPE, Arista, and Huawei are making inroads. Switchzilla managed full-year growth of 1.5 per cent in switching, but shed more than 2 per cent of its market share (from 57 per cent down to 54.9 per cent). IDC noted that its biggest challenge is in the 10G segment, where its market share fell from 52.7 per cent by revenue to 47.6 per cent.

Huawei ended the year with a Q4 share of 10.3 per cent of switch revenue, and HPE grew to 5.9 per cent. Arista is still trying to wrap up the loose ends of its lawsuit with arch-enemy Cisco, but it piled on 40.9 per cent year-on-year to carve out 5.9 per cent share by Q4.

A new name will soon join the IDC vendor segmentation: China's New H3C Group, 51 per cent owned by a Tsinghua Unigroup subsidiary and 49 per cent by HPE. ®