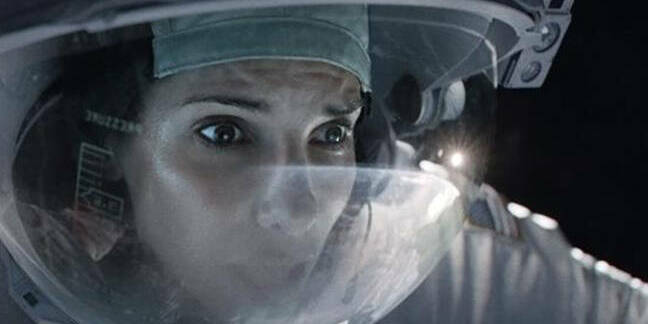 The space-disaster movie Gravity – where an escalating wave of space debris wipes out a space station and shuttle – now looks like a slightly more plausible scenario.

The Federal Communication Commission (FCC) has pulled permission from Silicon Valley startup Swarm Technologies to launch four satellites into space after what it says was an "apparent unauthorized launch" back in January.

According to IEEE Spectrum, that unauthorized launch consisted of four experimental satellites that the FCC had decided were too small to be noticed in space – and hence pose an unacceptable risk of collision – but which the company may have launched anyway, using a rocket based in India.

The federal regulator has sent a stern letter [PDF] to Swarm withdrawing its permission to launch four new, larger version of its "SpaceBee" satellites while it looks into events.

"The grant for STA 0026‐EX‐ST‐2018 has been set aside and is now in a pending status for further review," an email from the head of the FCC's Experimental Licensing Branch, Anthony Serafini, to Swarm's owners reads. "The International Bureau requested that the grant be set aside in order to permit assessment of the impact of the applicant’s apparent unauthorized launch and operation of four satellites, and related statements and representations, on its qualifications to be a Commission licensee. "

The launch under scrutiny carried a range of satellites but while Indian space agency ISRO lists all those satellites and their owners, the four "two-way satellite communications and data relay" devices in question are anonymous.

They do however appear to exactly match Swarm's satellites – including the orbit paths that the company has outlined in its materials.

Back in December, the FCC stated clearly that it did not approve the release of those satellites into space.

"You are advised that the Commission is unable to grant your application," a letter [PDF] from Serafini says. "The applicant proposes to deploy and operate four spacecraft that are smaller than 10 cm in one of their three dimensions. These spacecraft are therefore below the size threshold at which detection by the Space Surveillance Network (SSN) can be considered routine."

In other words, they are too small to be easily seen and hence avoided – raising the risk of a Gravity-style incident.

The company's efforts to mitigate this risk by adding radar reflectors and GPS trackers were also rejected by the FCC: "The proposed addition of Ku-Band radar reflectors to the satellite would overcome this issue with respect to only to the small portion of the SSN that utilizes Ku-Band frequencies. Use of GPS data from the satellites will be available only if and while the satellites are functional."

As such, Serafini concludes, "the ability of operational spacecraft to reliably assess the need for and plan effective collision avoidance maneuvers will be reduced or eliminated."

In other words, it's a ticking time bomb.

The idea behind the mini-satellites – which the company proudly calls "the world’s smallest two-way communications satellites" – is to create an internet-of-things network in outer space.

Swarm envisions many, smaller and cheaper satellites circling the globe and providing tracking for billions of devices on the ground. The National Science Foundation has even given the company grants to pursue its plans.

The company is run by people with an impressive track record of space-related engineering, and, according to the space biz, several very large corporations and the US military have expressed an interest.

Those plans hit a roadblock however when the FCC refused to approve satellites that were so small. And so the company went back to the drawing board and created a larger version to fit within its guidelines. The FCC then approved the new, larger versions.

But it appears that the company went ahead and launched its non-FCC-approved satellites anyway. And that has not pleased the federal regulator.

Swarm has so far refused to comment on the matter or acknowledge it is behind the four satellites that are up in space right now.

It's extremely unusual for anything to be launched into space without approval. In fact, we haven't been able to find a single instance of it happening. Companies that fire rockets into space are expected to have all the related paperwork and approvals locked down tight for pretty obvious reasons.

There are many times in which the maxim "act first, ask for forgiveness later" is a useful guide to getting things done. But when it comes to space, it's probably better to stick to the rulebook. ®