Are you Falcon sure, Elon? Musk vows Big Rocket will go up 2019 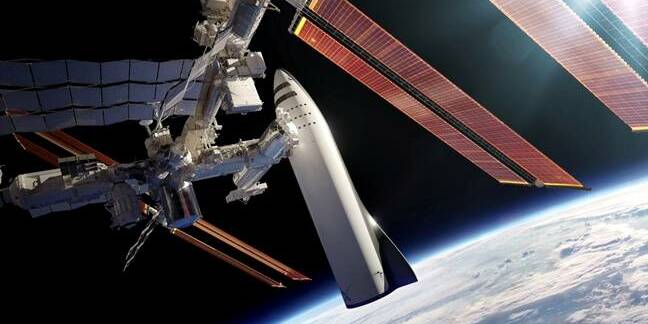 Possibly referring to the multi-year delay in the flight of SpaceX's Falcon Heavy and pretty much every other rocket launched by the upstart, or maybe Tesla's habit of not making enough cars, he admitted: "My timelines historically have been a little optimistic."

Musk went on to say he was "trying to recalibrate to some degree" before unleashing the usual hyperbole on the eager audience.

Regarding the upcoming Big Falcon Rocket (BFR) he plans to send to Mars, Musk told his interviewer that SpaceX is "building the first ship now and will be able to do short up-and-down flights some time in the first half of next year".

Yes, 2019. The same year that NASA, an organisation as adept as SpaceX with optimistic timelines, is likely to fly its own titanic tube of thrust in the form of the Space Launch System (SLS).

Musk boasted of the capabilities of his new lifter, which would have "lift-off thrust about twice that of a Saturn V" and able to fling "150 metric tons to orbit and be fully reusable".

Costs would, as is normal for a SpaceX prediction, be slashed from current levels, with a launch coming in cheaper than the original Falcon 1 (which itself was between $5m-$6m, according to Musk).

How that cost actually breaks down wasn't detailed.

For customers who care not a jot about reusability and are happy to send the remains of the rocket hurtling into the ocean, the payload to orbit would be doubled.

Musk held forth on a few other favourite topics, estimating that self-driving cars would be "200 per cent safer than a person by the end of next year" and that of the software already trundling around his cars "V1 has already seen a 45 per cent decrease in accidents".

As with all statistics, your mileage may vary depending on how you read them.

But Musk soon turned doom-monger, returning to his pet topic of AI taking over the world.

Predicting that advances would come much faster than expected, he said this the most "existential crisis we will face, and a pressing one". The "danger of AI is much greater than the danger of nuclear warheads", he said, going on to call for better regulatory oversight.

After all, governments get a bit twitchy when rogue nations start playing with uranium but don't seem as bothered about AI work.

Of course, Musk may be part of the problem. When asked about his embryonic satellite internet relay network, Starlink, he jokingly referred to it as "Skynet".