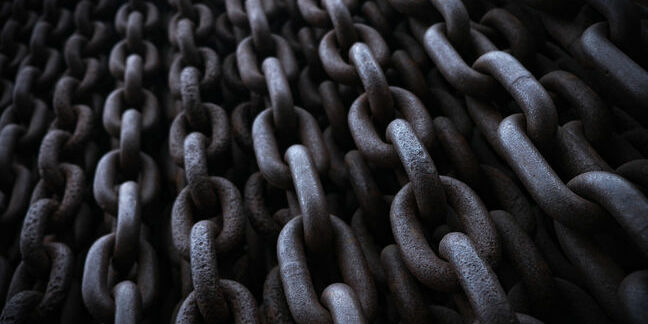 Analysis At the Open Source Leadership Summit in Sonoma, California, last week, The Register caught up with Brian Behlendorf, executive director of The Hyperledger Project, and had a chance to chat about the state of open source blockchain technology.

Behlendorf took over the organization in May 2016 after the Linux Foundation announced the project in December 2015. Hyperledger aims to promote the creation of open source code for running distributed ledgers, otherwise known as blockchains.

A blockchain is made up of blocks of data, chained together with cryptographic hashes and distributed across multiple nodes. It's a sort of shared database that can be verified to prevent tampering.

Back in 2015, Behlendorf said, when Hyperledger had just been established, he was concerned that the proof-of-work algorithm and the CPU burn that goes along with it would become problems for Bitcoin. But he felt that blockchain technology could help address the growing centralization of the internet.

Bitcoin's proof-of-work mechanism, through which new coins are created, demands calculations that are difficult to produce but easy to verify. Hence Bitcoin miners need massive computing power to generate the cryptocurrency, which gets tracked through its decentralized blockchain network.

Proof-of-work matters when you have anonymous participants in the network; but most of the business world, said Behlendorf, doesn't need that.

Behlendorf believes blockchains will play a prominent role in a growing number of legitimate business activities that have nothing to do with cryptocurrencies.

"At first, when I saw the Hyperledger announcement, I thought it was the old guard trying to be cool again," he said, likening the situation to a middle-age man showing up at a skateboard park, with elbow-pads and knee-pads bought on Amazon, saying, "Hey kids, hold my beer."

But, Behlendorf said, the companies involved, including IBM and Intel among others, weren't quite so clueless and in the almost two years since he started running the organization, Hyperledger now has two projects – Fabric and Sawtooth - that are available as production-ready releases.

"Having two frameworks out there for some has been confusing," he said. "But we have MySQL and Cassandra. We have Linux-based and iOS-based phones. There's more than one way to slice an egg. Right now, it's this Cambrian explosion kind of moment where it's worth mapping the landscape rather than being Teutonic about it."

Behlendorf expects a consolidation event at some point, but right now is more concerned about exploring the technological possibilities.

In addition to its two production-ready blockchain frameworks, Hyperledger has taken seven other initiatives (distributed ledger frameworks and tools) under its wing, ranging from an implementation of the Ethereum smart contract engine (Burrow) to a distributed digital identity system (Indy) to an interoperability platform for doing transactions across ledgers (Quilt).

The organization's initial supporters, a group of 30 organizations, has meanwhile ballooned into more than 190 companies, nonprofits, schools and government agencies. About of quarter of the project's members are in mainland China.

As a indicator of interest in Hyperledger tech, Behlendorf pointed to an online blockchain course on edX that has attracted some 75,000 to register. "That says to me there's a tremendous appetite for people to upskill in this space," he said.

Companies, said Behlendorf, are moving more cautiously, piloting the technology but not jumping in all at once.

"These are the kinds of projects that, because they tend to be at the heart of transaction systems, aren't like a blog," he explained. "They're not something you'd just add and then tear back down."

But there are live examples running in production. Behlendorf pointed to Everledger, which uses Hyperledger Fabric to track diamonds through the supply chain. "That's already caught millions of dollars of attempted fraud," he said.

Also, he said, IBM is using the technology in an internal product financing chain with suppliers that they claim has created $60 million in value. And CLS Bank plans to go live this year with a payment netting platform built on Hyperledger Fabric.

"This isn't the kind of thing like Wordpress where there's going to be suddenly 10,000 deployments in a few months," he said. "But there are I bet 10,000 engineers with their hands right now taking Fabric or Sawtooth or Indy through their paces."

Behlendorf said one of the important tasks for Hyperledger is to demystify the technology. "People are told about these machines solving complex mathematical problems when all they're doing is like guessing things and running SHA-256 against it, which is not a big deal. In our system, it's really a distributed database that anybody can write to."

The magic, he says, comes from the consensus mechanisms – Byzantine fault tolerance, Raft consensus mechanism, or proof of elapsed time. "These are tools to help guarantee the integrity of the system, but also to ensure that individuals can't frontrun other transactions," he explained, noting that techniques for dealing with issues like network latency – which can mess up a distributed database – still have to be refined.

Another important task is making the technology more approachable through tutorials and outreach, to help ease the path to corporate adoption.

What's the technology good for? "Any integration challenge where there's enough complexity that arises from correlating the efforts of multiple partners," said Behlendorf, who argues that distributed ledgers can help wean the world from the centralized hub-and-spoke model where some large entity serves as the intermediary between two parties involved in a transaction.

He points to a project being developed in the Philippines that involves the six largest banks there. When completed, he said, it will allow customers to move their data – transactions, credit histories, and the like – between institutions, control how it gets shared, and even remove their data from a bank if, say, a loan application has been denied.

Behlendorf contends blockchain technology will shake up how business transactions are done, particularly in the finance and healthcare sectors.

"I think [IBM CEO] Ginni Rometty to her credit got it right when she said what the internet was to information, blockchain technology will be to transactions, in terms of making them really cheap to record, and easy to verify," he said.

For some companies, that will mean re-thinking their value proposition.