Oozing with info, glazed with love: Treat yourself to a storage doughnut

All the calories you need but never knew you wanted

Veritas is renewing its assault on Data Domain and the disk/cloud archive market, Nutanix has offered $3,000 rebates to resellers of a Dell XC Core product, and flash memory researchers are looking at 128-layer 3D NAND.

96-layer flash isn't even a thing yet, but boffins always have to look ahead. Today we get to take a look with them.

The flash industry is delivering 64-layer 3D NAND, while sampling and trying to productise the next step forward, 96-layer 3D NAND, with a notional 50 per cent capacity jump.

Industry analysis outfit LAM Research is looking further ahead and has 128-layer 3D NAND in its sights.

According to Wells Fargo senior analyst Aaron Rakers, Western Digital started sampling 96-layer product late last year but significant production is not expected until the second half of this year.

The LAM Researchers say more and more capital is needed to develop each advance in layering, calling this the capital intensity. They say:

Looking out to 2021, the researchers predict 3D NAND will account for 98 per cent of all NAND wafer production; it was 50 per cent in 2017. That production will be segmented with 128-layer approaching 40 per cent:

Rakers' industry checks suggest Toshiba/Western Digital could still use a single-stack architecture at 128-Layer 3D NAND rather than a string-stacking one.

Rakers tracks Dell EMC storage revenues and has estimated and charted them from 2009 to 2017, showing three years of decline: 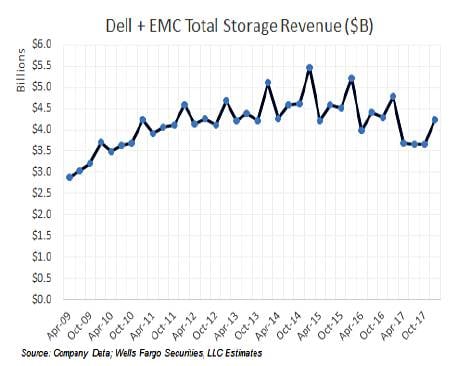 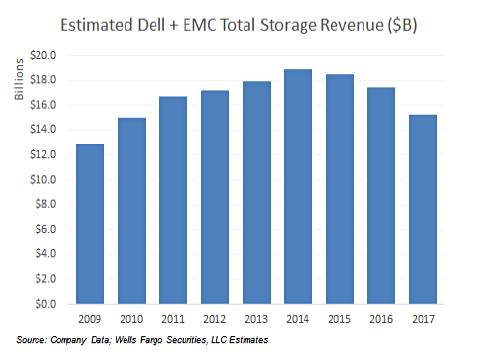 He notes Dell reporting that its overall storage demand (revenue and deferred revenue) in its fourth fiscal 2018 quarter (ending January 31) increased year-over-year for the first time since the close of the Dell EMC transaction in the October 2016 quarter. There was strong growth in its storage deferred revenue in FY2018 driven by new storage delivery models (such as consumption-based).

Nutanix OEMs its HCI software to Dell EMC, which sells it in its XC appliances alongside its own VSAN-based VxRail appliances. There are new channel programme incentives and expanded standalone software licence offerings with Dell EMC from Nutanix.

Specifically there is an XC Core offering, which includes PowerEdge 14th-generation servers and Dell EMC solution integration software. It's an alternative to other XC products to let customers purchase the Nutanix software licence separately from the rest of the appliance, with access to software support directly from Nutanix.

There are new partner incentive rebates:

It says this provides customers with total control over their stored data without risk of outside monitoring or attack.

Panzura quotes Scott Sinclair, senior analyst at Enterprise Strategy Group: "The ability to manage, store, backup, and recover data in a private environment while ensuring no communication with any public service or IP address is extremely valuable for government and heavily regulated industries."

Private Secure Site Mode is available now on Panzura Freedom 7.1 and is standard at no additional cost.

The Nikkei Asian Review reports that WDC will invest $4.68bn (¥500bn) in its flash joint venture with Toshiba between now and 2021. The cash will help pay for clean room equipment in Fab 6 at the Yokkaichi plant in Mie Prefecture and a new plant in Kitakami, Iwate Prefecture, set to open in 2020. Both will build 3D NAND memory chips.

This is a sign that WDC and Toshiba are moving on after the near year-long spat over the Toshiba Memory Business's sale of its interest in the JV to a Bain Capital-led consortium.

Approval of that deal by the Chinese anti-trust regulator is taking longer than hoped and approval is now expected between April and June.

Toshiba is in better financial shape now, having raised ¥600bn in December from issuing new shares to overseas funds. This should enable it to avoid Tokyo Stock Exchange delisting.

It has a new chairman and CEO, Nobuaki Kurumatani, 60, who takes up the posts in April. He currently heads the Japanese arm of private equity firm CVC Capital Partners and was at Sumitomo Mitsui Financial Group (SMFG), which lent money to Toshiba.

The incumbent CEO, Satoshi Tsunakawa, downgrades to COO but will remain Toshiba president.

Veritas is taking on Data Domain with renewed vigour. It has two new turnkey appliances – Flex and Access – with a focus on healthcare but not limited to that.

The Flex 5340 Appliance, an upgrade of the 5240 Backup Appliance, is built with microservices, and uses NetBackup and NetBackup CloudCatalyst (PDF), with its transfer-to-the-cloud deduplication capability. 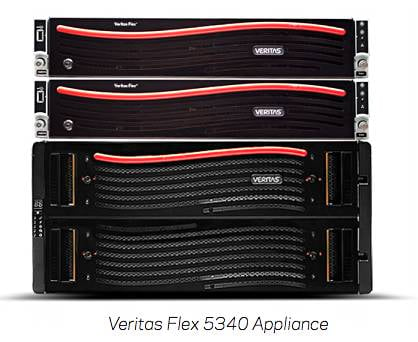 Veritas says consolidating multiple NetBackup and NetBackup CloudCatalyst deployments on a Flex Appliance drastically reduces the number of server and storage devices needed. It can send data for long-term retention to the Access 3340 Appliance and public clouds.

There can be a single server, or two in a high-availability setup with up to four storage shelves, and a 1.9PB maximum usable capacity. The ingest rates are:

The Access 3340 Appliance is aimed at tape archive replacement. It's based on Veritas's scale-out NAS software, integrated, like the Flex Appliance, with NetBackup and NetBackup CloudCatalyst. It delivers, Veritas says, on-demand, enterprise-wide backup and recovery, long-term retention and cloud tiering.

Veritas has been in the scale-out NAS area for some time, having a FileStore N8300 product, built with Huawei hardware, back in 2011.

The appliance is offered on a pay-as-you-grow model that starts at 700TB of usable capacity and scales to 2.8PB. It comes with two server nodes and one to four storage shelves. 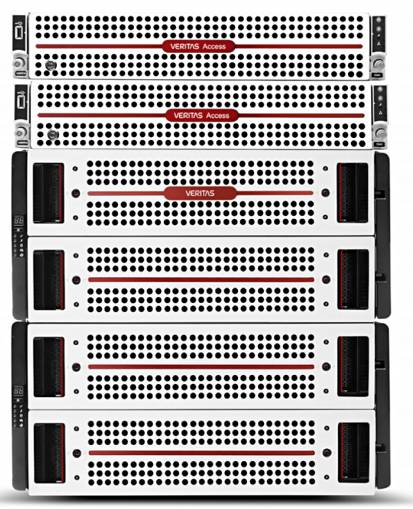 Get a datasheet here.

The Access Appliance is available now and the Flex Appliance arrives next quarter.

CCC uses a constellation of 12 satellites in low-earth orbit (LEO) that are networked with a laser photonic ring.

Wasabi is AWS S3 bit-compatible, and costs a flat $.0039/GB/Month with a 1TB minimum usage. It also offers immutable buckets.

Acronis has announced a strategic partnership with Google Cloud, revealing plans to integrate Acronis backup products with the Google Cloud Platform. It will increase the number of cloud regions where Acronis's partners and customers can store their data and bring fast uploads and data sovereignty options to users in a greater number of countries.

Google Cloud Platform will be integrated into future releases of Acronis's backup, disaster recovery, and file sync and share products.

Backblaze is reducing the price of Backblaze B2 Cloud Storage downloads by 50 per cent, with B2 download pricing dropping from $0.02 to $0.01 per GB. The first gigabyte of data downloaded each day remains free.