We can't see alien radio signals because they were snuffed out

If we ever detect signals from extraterrestrial civilisations, they are likely already dead, a somewhat downbeat update to the venerable Drake equation suggests.

The original equation was devised in 1961 by astrophysicist Dr Frank Drake ahead of a meeting at the National Radio Astronomy Observatory in Green Bank, West Virginia, about detecting alien radio signals.

The goal was to estimate the number of active civilisations with which we could communicate.

The equation has since undergone multiple refinements and is generally regarded as more a starting point for discussion than something to be solved.

With factors such as an estimate of how long a civilisation will actually endure, arriving at a figure that is not at least partly conjecture is impossible.

A team led by physicist Claudio Grimaldi of the Federal Polytechnical School of Lausanne in Switzerland – including Dr Drake himself – has suggested an update to the equation to take into account the time a civilisation might broadcast electromagnetic radiation that could be detected by Earthlings.

By considering the time between when a civilisation begins broadcasting to when that civilisation stops, the team is able to theorise a bubble expanding outwards at the speed of light. 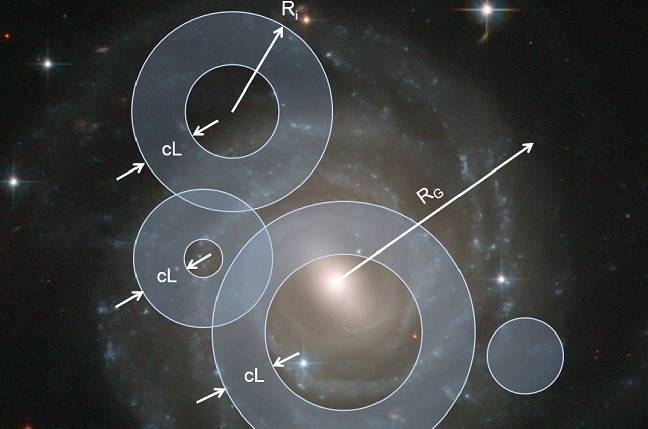 The shell of the bubble is of a constant thickness, based on how long the civilisation endured.

For civilisations that blew themselves to bits after only a few hundred years, the thickness of this shell will be vanishingly small, making detection by Search for Extraterrestrial Intelligence (SETI) initiatives highly unlikely.

The paper suggests that civilisations that survive for 100,000 years or more will leave a shell thick enough to be spotted by SETI.

Anything less than that and the volume of the electromagnetic waves will be smaller than the galaxy, limiting detectability.

The new theory suggests that the Milky Way could be full of these shells, intersecting as they move outwards. However, unless the lifespan of the civilisation has passed a certain threshold, we are unlikely to catch them.

And even if we do, chances are they're already dead. ®

The Fermi paradox nodded to in the headline was an argument made by physicists Enrico Fermi and Michael Hart in 1950 which treads similar ground to the Drake equation. It can be poorly summarised thus: there are beeellions of Sun-like stars in the galaxy far, far older than ours. Surely some of those systems harbour Earth-like planets. If Earth is typical, some of those planets must have supported intelligent life. Some of these civilisations may also have developed interstellar travel. So where is everybody? Why hasn't Earth been visited yet?