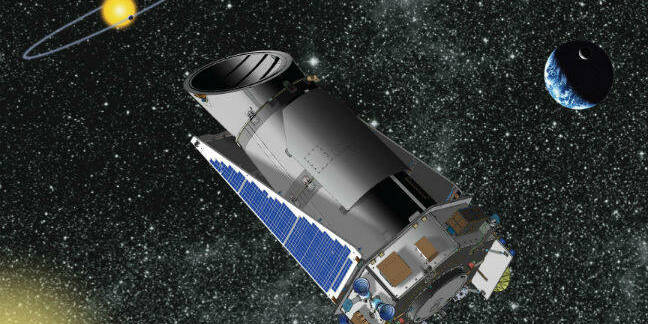 NASA has announced the Kepler Space Telescope has almost exhausted its fuel supply.

News of the observatory's decline is expected: it was launched in 2009 and expected to last three-and-a-half years.

It's still working today, even though the second of two “reaction wheels” used to aim the telescope broke in 2013. In its K2 configuration, Kepler has relied on solar pressure to maintain its aim.

However the instrument needs to re-orient itself for each new "campaign" - it's currently on its 17th - and each such manoeuvre uses some of the 12 kg of fuel it carried at launch.

Once the dipstick comes up dry, Kepler will not be able to cast its eye in a different direction.

Unlike other artificial satellites, Kepler won't burn up in Earth's atmosphere, because at 94 million miles away (151.2 million km), it's too far out to fall. It will, after it's shut down, engage in an eternal pas de deux with Earth, falling further behind as Earth orbits “until we eventually catch up to it”, a NASA's FAQ said.

In around 40 years from now, Earth will pass close enough to Kepler to give it a gravity assist. The spacecraft will then move ahead of Earth, eventually catching up from behind to get another gravity assist, this time slowing it down; Earth will catch up with Kepler from behind – and the cycle could repeat “indefinitely”, NASA said.

Kepler will never get closer than Moon-distance to the Earth, the agency added.

NASA engineer Charlie Sobeck wrote that the end is expected within months (although he added “but we’ve been surprised by its performance before!”).

Apparently, tracking fuel consumption in a spaceship 94 million miles away is imprecise. Sobeck wrote that “Without a gas gauge, we have been monitoring the spacecraft for warning signs of low fuel — such as a drop in the fuel tank’s pressure and changes in the performance of the thrusters”.

Mission engineers have cross-checked those estimates against the thrusters' “burn time” since launch, and a calculation of the accumulated change in Kepler's momentum over time.

These techniques have let the mission team arrive at a “consensus estimate of the remaining fuel”, the FAQ page says.

NASA will run Kepler for science until the last possible moment, before sending the commands that shut it down forever.

Even after the instrument goes dark, Kepler will still yield data for years to come. For example, in February an international team of scientists added 15 exoplanets to the catalogue.

Hubble 'scope gyro drama: Hey, NASA, have you tried turning it off and on again? Oh, you did. And it worked? Cool

Hi there, Hubble, glad to hear you're doing okay

Our eye on the sky winks open