Intel tosses in code because data centre hypervisors are too bloated

UPDATED The Linux Foundation has announced a new hypervisor for use in embedded and internet of things scenarios.

The Linux Foundation already hosts the Xen Project, which has an effort under way to adapt that hypervisor for embedded and automotive applications. Xen has made that effort a priority after Amazon Web Services signalled its hypervisor will not be its long-term choice, as The Reg revealed last year.

But ACRN thinks Xen and other hypervisors built for data centre use can't do embedded well due to two problems: they’re big, and; they can’t prioritise certain workloads.

ACRN addresses the first issue by being small: the project claims it’ll have just 25,000 lines of code, compared to over 150,000 for data centre hypervisors.

The second issue is important because one target for ACRN is automotive use. Today, cars have several computers linked over a bus. It’s widely envisaged that future cars will have one computer running a hypervisor to isolate workloads, an arrangement that will mean fewer integration hassles and lower costs for auto-makers. ACRN likes that idea, but thinks a hypervisor used in such scenarios needs to prioritise workloads related to safety. Conventional hypervisors can’t do that, so ACRN will so that future in-car computers know when to starve the entertainment system of resources in order to ensure drivers’ or riders’ safety. 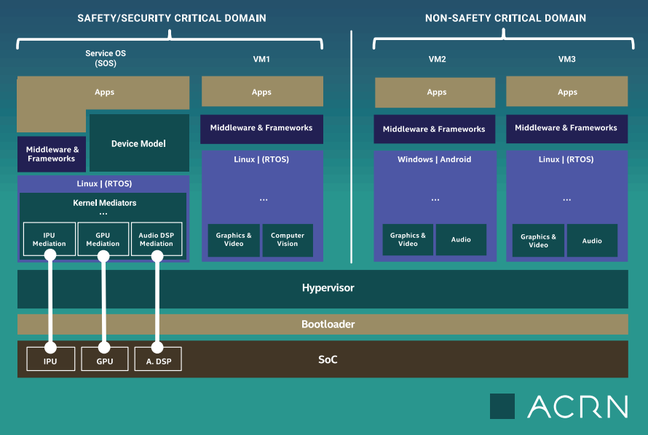 ACRN may have another purpose, too: Intel’s responsible for lots of its code and for now it only runs on select Intel PCs. The project’s GitHub page says: “We welcome community contributions to help build Project ACRN support for a broad collection of architectures and platforms.” But for now it looks like the ACRN hasn’t fallen far from the x86 tree. Which is good for Xen’s efforts, as it runs on just about anything.

The Register has asked The Linux Foundation how its hypervisor projects interact and will update this story, or pen a new one, if we receive a response. ®

The Linux Foundation (LF) has responded to our request for comment with the following:

"Open source is a collaborative development and licensing model. Different communities may form at various points in time, targeting different market segments using similar technical solutions with different trade-offs, including a different set of licensing options. The Linux Foundation does not pick technical solution 'winners', but rather enables communities to develop and explore technical options in an open community.

The ACRN community formed to focus on embedded and IoT use cases, being able to reach safety critical certification and offering a permissive licensing model. The ACRN community felt they had code that was better developed in the open amongst the ecosystem that was using it and so they put the project under a neutral home.

The Xen Project’s traditional focus are server virtualization, cloud computing and security applications. However, the Xen Project has recently seen significant momentum in the embedded space, especially in the enablement of more complex types of embedded applications, due to its isolation and security features. In the last two years a number of embedded/automotive companies have built commercial products on top of Xen Project and contributed to the project, including EPAM, GlobalLogic, XILINX, DornerWorks, NXP, Star Labs, and more.

The LF continues to support the Xen Project and KVM communities and while each may have their own areas of focus, all are continuously moving forward and offering attractive options for segments of solution builders and end users.

There's a lot of great potential when it comes to virtualizing embedded environments, and having multiple hypervisors focusing on solutions for the embedded space will lead to better and more options for developers. The Linux Foundation always strives to accelerate technology development and commercial adoption through building sustainable ecosystems and open source projects like the Xen Project and ACRN."