He He He: Seagate's gasbag Exos spinner surges up to 14TB

Seagate has unveiled a 14TB helium-filled disk drive in the Exos line.

We understand it has a 6Gbit/s SATA or 12Gbit/s SAS interface and spins at 7,200rpm, being a data centre nearline capacity drive.

It may have nine platters with a 1.56TB/platter capacity level, Seagate isn't saying.

The statements suggest the X14 may have a higher transfer rate than the Toshiba MG07ACA's 298MB/sec.

It has encryption and complies with the Federal Information Processing Standard (FIPS) 140-2, Level 2 certification and the Common Criteria for Information Technology Security Evaluation (CC) security standard. 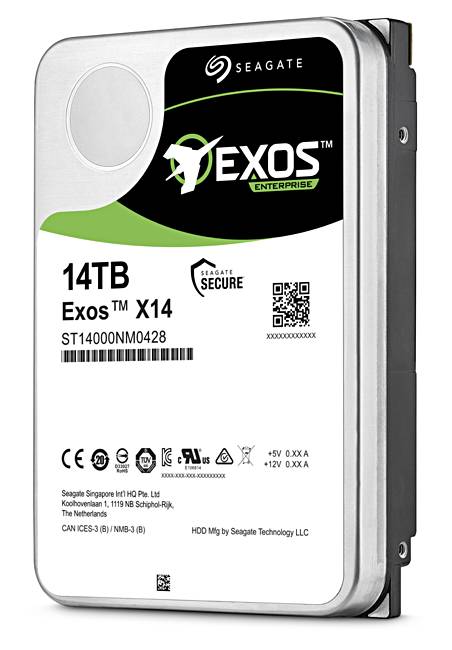 Shingled drives are not suitable for normal nearline use, as their rewrite speed is slowed by the block-level read, amend, rewrite process inherent in shingling. Non-shingled drives merely overwrite existing tracks, which is much quicker.

We now have Western Digital lagging Seagate and Toshiba due to its lack of a non-shingled 14TB drive in its range. We expect it to catch up promptly.

The Exos X12 theoretically provides 1PB of capacity with 84 drives. The X14 bumps this up to 1.17PB – not a huge jump but useful nonetheless.

The X14 is sampling with selected customers, like Baidu, and will be followed by production availability this summer. It's on display at Seagate's booth #A14 at the Open Compute Project US Summit 2018 along with Seagate's Guardian Series portfolio, Nytro Q-Boost and HAMR-based drives, as well as the Nytro 5000 NVMe SSD and its MACH.2 Multi Actuator and HAMR technology.

We might expect Seagate to introduce a desktop version of the Exos X14 in a month or few, like a 14TB Barracuda Pro. And then it has a couple of 12TB IronWolf NAS drives and 10TB SkyHawk surveillance disks. Both lines look to be potential recipients of 14TB technology. ®